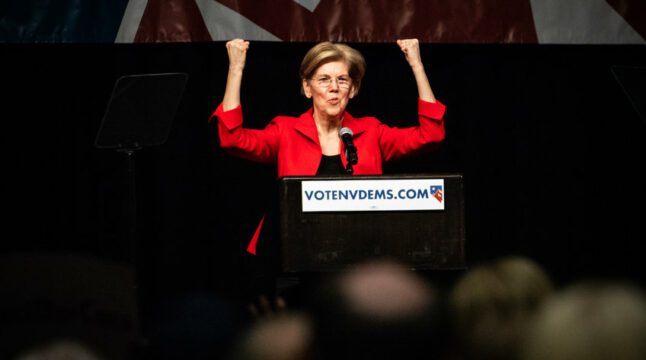 Sen. Warren presents herself as a critic of big banks and a fighter for the little guy. In a recent exchange with law professor Angela Walch, the duo purport cryptocurrencies as a significant threat to the US financial system—one that does more harm than good. Is there merit to such claims?

Cryptocurrencies: What are they good for?

Whether you call them miners or validators, depending if they host Proof-of-Work or Proof-of-Stake blockchains, mining is the crypto cornerstone. Miners validate transactions across all blockchain nodes and add new data blocks, making decentralized finance possible.

This makes miners the primary target for governments and their legislative initiatives. Before the dust even settled from Bitcoin’s Great Migration from China, it seems that the regulatory burden is coming down on miners from the US Senate. At the forefront of that push is Sen. Elizabeth Warren, having urged Treasury Secretary Janet Yellen to “step in before it is too late”.

Revealing Exchange Between Warren and Walch

Among the participants in the hearing, Angela Walch, Professor of Law from St. Mary’s University School of Law, presented the most indicative interaction because Sen. Warren clearly positioned Walch as a sounding board for her regulatory agenda. The entire exchange played out by the numbers. Sen. Warren painted key cryptocurrency aspects as either negative or fallacious, with Walch then bolstering those presented points:

Not heavy on the technical side, the exchange revolved more around word play, which is understandable given that both Sen. Warren and Angela Walch have educational backgrounds in law.

The first issue that came up was decentralization.

After acknowledging that banks tend to restrict access to financial products, absorb competitors and exploit consumers, Sen. Warren asked Walch if it is the case that cryptocurrencies are decentralized enough to counter banks. To which, Walch responded:

“Technically, you could say it is decentralized, it is more than one, but we have to remember there are absolutely pockets of power within these systems. Particularly, core software developers and the large miners who can absolutely exploit their position of power to affect the users of the systems.”

The crypto space tends to have open-source coding practices, making it easy for everyone to participate in its development. After all, Dogecoin emerged as a tweaked Litecoin code over a weekend, and Litecoin itself is a tweaked Bitcoin code. This inevitably creates a situation in which a core developer could hoard a significant percentage of the coin’s supply, and sell it off at an opportune moment.

However, with large market cap coins such as Bitcoin (BTC), with thousands of nodes, the ecosystem is quite different. All miners must reach a consensus to implement an upgrade, as it happened in June with Taproot. Likewise, users can switch to another coin if they don’t like the development’s trajectory.

This too happened with Bitcoin Cash (BCH) as Bitcoin’s hard fork. In a nutshell, both miners and core developers represent “pockets of power”, but only to the extent to which any decentralized system can even exist as such. Compared to centralized traditional finance, which Sen. Warren recognizes as problematic, crypto represents a path toward solution. Yet, she took Walch’s answer to conclude the following:

Oddly enough, “shadowy, faceless group” would soon vanish from the crypto space if their product is not up to par. In-between frequent code audits, media scrutiny and decentralized insurance, such portrayal of the crypto space seems highly exaggerated. Moreover, does a similar exposure exist outside the blockchain space?

The second crypto issue that came up was security. Sen. Warren stated the common claims when it comes to blockchain technology; that it is impossible to manipulate or at least difficult to hack. She posed a question to Walch whether cryptocurrencies are “as safe and as secure as their proponents claim”?. Walch responded with the following statement:

“The parties within the system, such as miners, can exploit their position to reorganize the blockchain. That has become a big issue and topic of discussion with Ethereum.”

The issue of immutability has been Walch’s pet peeve for years—five to be exact.

At a glance, it may seem that blockchain immutability is misleading. However, anyone who has spent a modicum of attention in the crypto space could have noticed the abundance of the term “virtually”- virtually unhackable, virtually immutable, etc.

This also directly relates to the well-known blockchain security term “51% attack”. If one were to gain hacking power over the blockchain, one would have to control over 50% of its nodes. The success of which would depend on both the number and distribution of nodes. Meaning, the more miners there are dispersed across regions, such decentralization would imbue cryptocurrency with greater security.

Accordingly, after China’s Great Migration, Bitcoin’s security is on an upward trajectory. Speaking of security, Walch went on to imply that exchange hacks are equal to blockchain hacks.

“There have been countless hacks of exchanges and stuff that are outside the crypto system.”

As of yet, across 74 million Bitcoin wallets, there has never been a documented hack. When the media refers to exchange hacks, this means that exchanges hold people’s private keys which cybercriminals hack. This hacking pathway is completely different from hacking Bitcoin itself.

This claim is equivalent to saying a vault was broken-into because the key to it was pilfered from some other, unsecured place. The fault extends to the owner of the key, not the vault itself (the vault representing the Bitcoin blockchain in this case).

Then, there is the issue of MEV – Miner Extractable Value – which miners use on Ethereum instead of classic crypto mining. By reorganizing orders, they are able to tweak their income level, also called front-running. However, this Ethereum feature can only slightly delay transactions, instead of subverting them due to the number of confirmations they undergo.

Lastly, Warren described the original vision of Bitcoin as a system that is resilient to financial manipulation, bank collapse and financial contagion. Then, she moved the goalpost from crypto integrity to its interaction with the traditional financial system.

“For that to be true, crypto would have to be insulated from the risks that make our financial system vulnerable to a crisis, and vice-versa. Is that the case?”

Walch once again agreed with Warren’s softball, noting that:

Walch failed to provide evidence for these claims or how such scenarios differ from common banking or stock trading outages. Moreover, massive risks to central banking continue to increase, with the US set to formally extend its debt ceiling for the 79th time in a row. Hardly any risks in the traditional financial system became a topic of discussion, however.

Sen. Warren summarized the session by acknowledging that banks have gotten too big to fail. However, in her view, cryptos could be more dangerous for consumers, worse for the environment, and more dangerous for the stability of the financial system. She concluded with:

“As the crypto market grows, so do the risks to our financial stability and our economy. Regulators need to do their job and step in before it’s too late.”

As an alternative to both banks and cryptos, Sen. Warren sees CBDCs as the answer, infusing all monetary power into one entity – the Federal Reserve -which would then gain immense surveillance, tracking, and withholding power, even to the extent of changing consumer behavior—as we are starting to see with China’s own developing CBDC.

What do you think are the biggest crypto hurdles, outside of volatility caused by relatively small market caps? Let us know in the comments below.