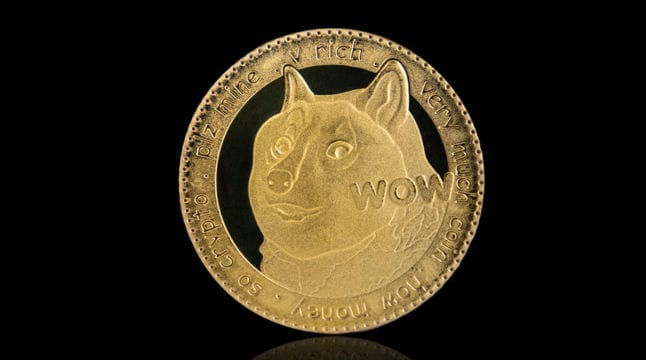 There are legitimate digital assets out there, but Dogecoin is not one of them. It's crucial that we understand this.

While going against the grain is not popular, it is responsible to examine current trends from a sober look. Dogecoin’s incredible pump is a perfect example of something seemingly fun, but containing the seeds of financial ruin.

Following the outage of Robinhood’s crypto trading in large part due to Dogecoin’s frenzy, the trend of mainstreaming the memetic coin continues. As of press time, the Change.org petition, created four years ago, to urge Amazon to accept DOGE as a payment method has almost reached its 150,000-signature goal.

The old petition itself is riddled with falsehoods:

“Amazon.com, being a leader in innovation, should accept Dogecoin as a form of payment. Dogecoin is fast, cheap, and stable. It is stable in value, has the lowest transaction fee of other major coins, has a huge supply of coins and has a very large, active community with on-going development.”

As you will see in this article, none of these irresponsible statements are true. Dogecoin’s primary purpose, if any, was to popularize the concept of cryptocurrencies in its early stages when Bitcoin’s price was over 75 times lower than its current value. Outside of that outdated mission, Dogecoin holds no intrinsic value.

However, due to reasons explained below, various companies are continuing to accept DOGE as payment, starting with Marc Cuban’s very own Dallas Mavericks.

Inevitably, as with any asset inflation, some people will reap big gains from DOGE trading. Nonetheless, DOGE is bound to leave a negative impact on the entire crypto space due to its lack of intrinsic value.

This part of the coin’s history is critically important to understand. Without it, we wouldn’t even be talking about DOGE as a relevant force in the crypto space. Many people now associate Dogecoin with the Shiba Inu dog meme, but this particular meme gained global traction long before Dogecoin’s launch in December 2013.

Three years earlier, Japanese pre-school teacher Atsuko Sato posted a series of photos on her personal blog of her rescue-adopted dog named Kabosu. One of those photos was the following:

It had all the memetic potential for infinitely varied commentary to be inserted – side glance, cozy couch, professional-grade lighting, crossed paws. It was a perfect fit for the emerging irony culture. As such, it spread around the world, just waiting to be picked by two serious people – Billy Markus of IBM and Jackson Palmer of Adobe. These software engineers used the meme for a noble goal – popularizing cryptocurrency as a concept to the masses.

Also, it was a joke. For such purpose, they created the coin over a single weekend, by effectively copypasting Litecoin’s code (itself derived from open-source Bitcoin) and tweaking it a bit. In fact, according to Markus, it took about 3 hours to create it.

“…from ‘that seems like it’s funny’ to actually doing it, took about three hours. It’s almost trivial to create a new cryptocurrency.”

When they talk about their creation, sentiments such as “funny”, “joke”, and “it will blow over” are a common refrain. Palmer once said,

“We thought it was this big joke that would die off,”

After it failed to die off, Palmer described Dogecoin’s persistence as “surreal”, “crazy”, and “nuts”. From these statements, it is safe to assume they hadn’t read psychological and marketing studies before they launched Dogecoin, but intuitively grasped the power of visual imagery. This field is one of the most established when it comes to neurology, psychology, social psychology, and marketing:

Even without knowing this in a formalized manner, one could easily come to the same conclusions by simply observing patterns and using the trial-and-error approach.  Accordingly, the culturally relevant irony dog became the face of virtual currency, increasing engagement and the fun factor. This doesn’t even touch on the simplicity factor, human-like expression recognition, co-evolution with dogs, and other hard-wired evolutionary drivers.

Can We Really Call DOGE a Cryptocurrency?

But wait, what does the fun factor have to do with Dogecoin as a cryptocurrency, some would say. Isn’t that a good thing? Yes, it would be a good thing if the underlying properties of Dogecoin weren’t so bad.

Originally launched as a Litecoin fork in December 2013, it had a 100-billion-coin hard cap. Palmer lifted this limit in 2014 with 5 billion extra coins mined into circulation every year. Consequently, Dogecoin is an inflationary currency with 127 billion coins, poised to double in 20 years. Did you know that inflation is a process in which USD loses value because there is too much of it generated by the Federal Reserve?

Did you know that the main reason Bitcoin grows in value is because it is a deflationary cryptocurrency, a hedge against inflation? Now, the common response to these concerns is to say Dogecoin is designed to be used as a faster and less energy-intensive payment method.

The problem is, we already have Litecoin (LTC) and Bitcoin Cash (BCH) for this specific purpose. The two of them have gained in legitimacy, with a recent integration with Venmo—a payment app with 70 million users.

Both LTC and BCH have limited coin supplies, with BCH the same as BTC – 21 million – while LTC is limited to 84 million. Moreover, Dogecoin’s transaction fees are increasing, which doesn’t exactly constitute a “cheap” alternative to Bitcoin.

Already, the median DOGE transaction fee had surpassed BCH by 16,705% and LTC by 452%. This will continue as the social media frenzy increases DOGE’s unwarranted popularity. Furthermore, DOGE’s intrinsic value is reduced by its inflation to miner reward ratio. In exchange for “low fees”, it issues block rewards worth 10,000 Dogecoins, setting its inflation at 4.1%. If this inflation rate happened in the real world, the Fed’s Chair Jerome Powell would be sweating bullets.

What are you left with, then? A virtual currency that has infinite supply and isn’t superior as a payment method to already established altcoins like Bitcoin Cash, Litecoin, or Monero, not to mention stablecoins. This leads us to the main driver of this year’s Dogecoin popularity spike – one of the world’s richest men, Elon Musk.

We can speculate on Elon Musk’s DOGE holdings all we want, or whether he used Dogecoin as a tool of distraction before he bought $1.5 billion worth of Bitcoin. The fact remains, he has 51.6 million followers, which is a population size greater than Canada’s by 37%. Musk leverages this powerful social influence to do, well, this:

Like dominos, Musk’s Tweets serve to push Dogecoin’s interest higher, which then temporarily increases its price. We can see that, momentarily, interest in Dogecoin surpassed Bitcoin three-fold, per Google Trends:

Being totally engrossed in memetic language is one thing, but omitting to expend any effort to explain DOGE’s lack of intrinsic value is another altogether. When seeing this, it is best to recall the wise words from Monty Python.

Correspondingly, reasonable people must ask themselves the following – ‘Is a strange billionaire memeing about dubious meme coins a valid basis for a system of cryptocurrencies?‘

Consider the Words of DOGE’s Creators

While Dogetipbot’s bankruptcy in May 2017 portends DOGE’s future, the best way to conclude this article is to relay the words of its creators. Bill Markus is not at all pleased with DOGE’s popularity:

“I don’t mind if someone spends ten bucks and gets some Dogecoin,” … “It’s like buying a movie ticket or something, that’s fun. But when someone puts $20,000 in? That makes me really, really uncomfortable.”

Jackson Palmer is equally worried, and had long-since made his Twitter account private before delivering his thoughts on the matter, from 2018.

“I think it’s relatively safe to label the current market as a “bubble”, although it’s hard to predict how much it’ll inflate and for how long before it inevitably bursts. My only hope is that when that does happen and people lose large sums of money, the negativity in the market doesn’t stifle technological innovation or interest in digital currency from the mainstream.”

Nothing has changed since. However, this time, the pool of people who tapped into DOGE is greater, judging by Robinhood’s recent outage alone. And when those who lose money far outpace those who sold into the rally, it will sour the entire crypto space for them. Moreover, there will be another round of headlines talking about joke coins, besmirching the entire digital asset community, once again.

Except, the crypto world is not a joke. It launched as a serious solution to a serious problem—centralized power stemming from centralized finance, with all of its baggage, from de-platforming, censorship, and de-banking, to absolute control and inflation. It is particularly egregious to see DOGE soar when there are so many other altcoins and projects deserving of one’s attention, while doing a better job at what DOGE’s function is purported to be.

Do you think prominent public personas like Elon Musk have a financial and moral responsibility when engaging with the public? Let us know in the comments below.