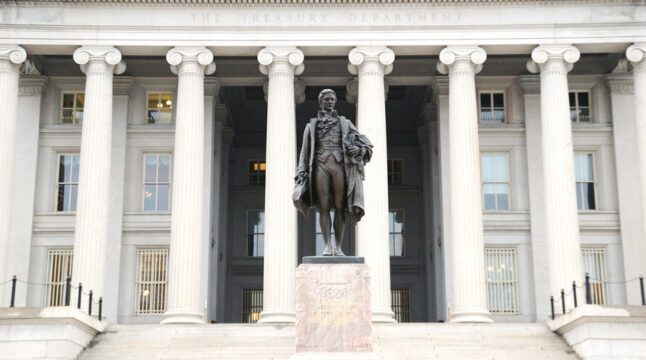 The concept of sound money, as applied to Bitcoin, gains new meaning when compared to the workings of central banks.

Raising the national debt has become an integral part of the US economy. Now, US Treasury Secretary Janet Yellen wants to suspend or increase the current debt ceiling, to prevent the US from “defaulting on its obligations”. More centralized than ever, the entire system seems to rely on what could be considered a single point of failure – the Federal Reserve.

Last week, Treasury Secretary Janet Yellen made the news when she asked Congress to suspend or raise the debt ceiling again. With the right context, there are significant implications at stake.

Have we moved beyond caring about debt since, under MMT (Modern Monetary Theory), debt is simply untaxed money? After all, Japan’s national debt to GDP ratio is 256.22%, which is 148.62% higher than the US one. Yet, we have not seen anything approaching economic turmoil in Japan.

At a glance, it seems that the level of US debt is not a big deal, so it wouldn’t matter if Yellen’s request receives bipartisan support again. Nonetheless, if we dot the i’s and cross the t’s, the similarities between the current year and the 2008 financial crisis come into sharp focus.

Imagine if your ability to pay the rent depends on how much money you can borrow every month. The same applies to the US government. It pays its obligations by borrowing money from the Treasury, except that the government’s spending increases drastically every year. In turn, the debt ceiling needs to be increased on a regular basis, currently holding at $28.1 trillion.

From this, we can conclude that raising the debt ceiling has become a bipartisan, perfunctory measure. Although the debt ceiling doesn’t limit government deficits, it does limit the Treasury from meeting its financial obligations.

Up to this March, the Treasury’s job was to procure about $6 trillion (or 27% of GDP), following Congressional budget approval, to alleviate the lockdown fallout. Otherwise, no stimulus packages would have been possible. This leads us to the following question: How does the Treasury fulfill its budget obligation and how is that related to the potential repeat of the 2008 financial crisis?

The Fed’s Treasury Bonds and the Impact on Commercial Banks

When the US Treasury needs money, the Federal Reserve obtains it by increasing the money supply and buying treasury bonds. Therefore, the debt ceiling is the top limit the US government can borrow cumulatively by issuing bonds. With the latter in hand, the Fed deposits them as reserve balance.

In turn, financial institutions – commercial banks or credit unions – use treasury bonds as a collateral. This is necessary because banks need funding for daily operations through the so-called overnight market. Therefore, banks engage in short-term borrowing to ensure cash flow, with treasury bonds as collateral.

This key component of the US financial system is also known as repurchase agreement – repo or RP. As a result, the more banks need the cash on the overnight market, the more collateral they need, eventually transforming it into bad collateral. Correspondingly, the more money the Fed puts into circulation, the more debt it accrues.

During the height of the 2020 crisis, the Fed lowered the collateral needed for commercial banks to effectively zero. Consequently, the banks didn’t need any collateral per dollar deposited. In March 2021, this ceased to be the case, as you can see from the chart below.

Now, as banks need to go to reverse repo for the collateral, they are spiking it at record levels, decreasing its value. Scott Skyrm, executive VP in fixed income and repo at Curvature Securities recently told MarketWatch:

“Either there is too much cash or not enough collateral… It’s two sides of the same coin.”

We have seen a similar scenario unfold during the 2008 financial crisis, which eventually required massive bank bailouts. However, because the Fed already signaled it will not tweak interest rates in the near future, it means it will take in all the incoming debt from commercial banks.

Remember, the Fed uses interest rates to govern how commercial banks behave, as an effect of the increased money supply. Now that the Fed is increasing the money supply further, the debt ceiling needs to be raised again. This creates an economy highly dependent on a single central bank – the Federal Reserve.

Such a dependency is so entrenched that it already got a name – taper tantrum. When the Fed eased the quantitative easing (QE), i.e., “money printing”, program in 2013, it caused an investor panic because they feared the stock market would collapse without the Fed’s support. The same is true now as it was then.

Where does that leave the US economy? In a seemingly endless cycle of increasing debt and money supply, which may lead to out of control inflation. This is also the likely reason why 2021 saw a record number of institutional investors doing a 180 and flocking to deflationary Bitcoin.

Increased money supply acts as a form of taxation because the fiat money you are holding is losing value. Do you think this is preferable to market correction?