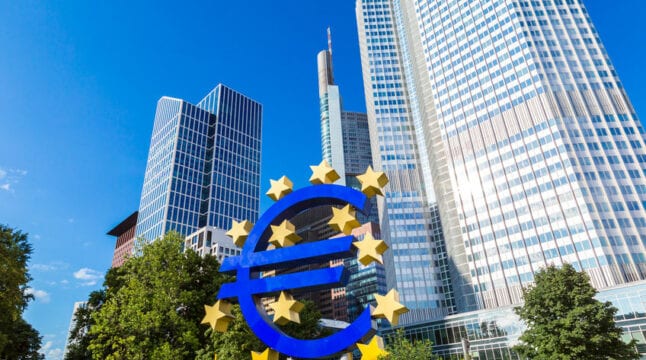 Cryptocurrencies may be the only way to demonstrate what the world would look like without central banking.

Veteran Bitcoin evangelists would be pleased to note that their long-held beliefs are so clearly confirmed by one of the world’s largest central banks. The question is, what role will Bitcoin play as it moved away from being a frictionless payment method.

European Central Bank Affirms the Need for a CBDC

The entire world is in a race to catch up with the monetary revolution brought on by Bitcoin. The key global powers are on their way to issue their response in the form of CBDCs – central bank digital currencies.

Due to the potential impact on both the financial world and crypto markets, the Tokenist diligently covers such efforts in regards to both China and the US.

This Tuesday, Europe’s equivalent to the Fed – European Central Bank (ECB) – issued a report that emphasizes the importance of CBDCs to deal with cryptocurrencies. Titled “The international role of the euro”, the 85-page report details the ECB’s impact on monetary policies, euro’s standing among the world’s fiat currencies, and concerns about negative interest rates, which are a direct result of the ECB’s policy to keep the inflation rate under 2%.

Just last week, the Tokenist noted that the Colorado Governor’s project to implement crypto for tax payments is unlikely to succeed. This is tightly related to the latest ECB stance on CBDCs. Once you understand that MMT – Modern Monetary Theory – serves as the managing system for the ever-growing, unsustainable debt, you are a step removed from the conclusion that fiat currencies must remain dominant at all cost.

Central banks understand this clearly, and are trying to convey it to their sphere of influence. In the case of the ECB, this would be 19 euro member nations. Under the section “Why a CBDC matters for international currency status”, on page 57, ECB admits the mortal crypto threat in slightly couched wording.

“Not only could this threaten the stability of the financial system, but individuals and merchants alike would be vulnerable to a small number of dominant providers with strong market power, and the ability of central banks to fulfil their monetary policy mandate and role as lender of last resort would be affected.”

In other words, competing cryptocurrencies, especially those that are deflationary, are positioning themselves to wrest monetary control from central banks.

“Issuing a CBDC would help to maintain the autonomy of domestic payment systems and the international use of a currency in a digital world.”

However, while CBDCs would effectively remove the need for commercial banks to exist, and create a more frictionless financial system, their appeal would be severely limited compared to cryptocurrencies.

Digital Currency is Not Cryptocurrency

Whether a central bank decides to use blockchain for its CBDC or not, is less important than its centralized control. Even if it is entirely blockchain-based for security reasons, all the CBDC nodes would be under the central bank supervision. In other words, their version of digital currency focuses on the most superficial aspect – digitizing bank notes in a secure manner.

In contrast, cryptocurrencies like Bitcoin (BTC) rely on decentralization so that no central body can temper with its network and issuance. More importantly, cryptocurrencies can either be pseudonymous or completely private, as is the case with Monero (XMR).

Furthermore, while Bitcoin (BTC) lost its “crypto” feature along the way, it can be interfaced to a smart contract ecosystem in which this can be circumvented. One of those powerful smart contracts comes in the form of atomic swaps. They can enable anyone to exchange one crypto asset for another, regardless if they run on two different blockchains. In practice, this would make Bitcoin – transparent digital gold – into a holding asset reserved for private payments.

Boris Schlossberg of BK Asset Management, noted that CBDCs as tokenized surveillance money will drive up crypto demand instead of suppressing it.

“Yet it is precisely this policy objective that will drive demand for crypto in the future…With many Chinese entrepreneurs and consumers clearly aware of the government’s intention to exert absolute authority over personal assets, the trend of converting at least part of one’s wealth into crypto assets will continue despite crypto’s inherent volatility.”

Speaking of inherent crypto volatility, remember that this is not a bad thing per se, but it is a major driver for crypto investments.

Bitcoin’s Dominance Painted a Target on its Back

Currently, Bitcoin is under dishonest attack by the financial media within the “carbon footprint” framework to topple its appeal as a deflationary counter to central banking. Elon Musk was a key player in this narrative, but it will likely run out of steam soon as Bitcoin goes green, following the migration of Bitcoin miners from coal-rich China. Already, according to Ark Invest, 76% of Bitcoin miners tap into renewables.

Outside of that soon-to-be-deflated narrative, Bitcoin (BTC) has become a store of value as attested by the Bitcoin Cash (BCH) hard fork. Correspondingly, the latter has 546x lower average transaction fees than BTC, making alternative cryptos more suitable as payment methods.

Whichever crypto gains that status, as CBDCs roll out and affect daily dealings, more people will begin to understand the importance of “crypto” in cryptocurrency, with the smart contract ecosystem already set up to greet them.

With the emergence of atomic swaps, do you think eventually all crypto assets will become private? Will this become the breaking point for regulatory bodies? Let us know in the comments below.