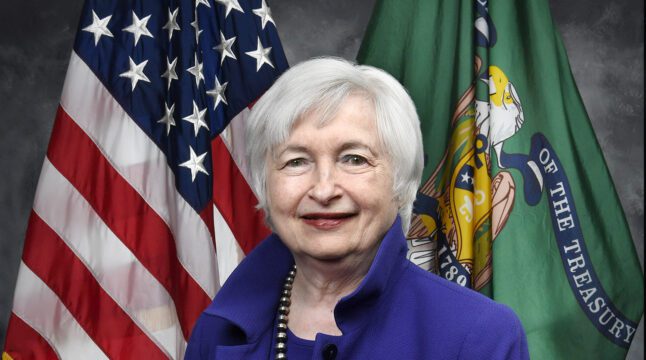 The Secretary of the Treasury has connections to Citadel. Do her relationships prevent impartiality?

It has been revealed that Janet Yellen, US Secretary of the Treasury, earned $7.2 million in speaking fees over the last two years. Within a disclosure form acquired by The Tokenist and issued by the U.S. Office of Government Ethics, Yellen was discovered to be on the corporate banking payroll, with organizations such as Citi, Barclays, and Bank of America all paying six figures for her to speak.

One of her regular customers has been Citadel, although the document does not specify whether it was Citadel LLC (the hedge fund), or Citadel Securities (the market maker). This situation has been gaining traction once again due to the recent discussions around trading “dark pools”, one of which is operated by Citadel Securities.

Yellen’s Involvement with the Corporate World

Yellen’s disclosure form reveals many ties to the corporate financial sphere, with Citadel being one of her big payers. However, it is not clear if she was paid for speaking with Citadel Securities, the market maker, or Citadel LLC, the hedge fund. Both entities were under public spotlight during the ongoing GME/AMC saga. And, while both organizations are distinct and separate, they were founded by the same person: Kenneth C. Griffin.

The disclosure document reveals Yellen gained $810,000 from speaking with Citadel on three separate occasions. This is more than triple her annual salary, which is an estimated $219,000. Yellen’s ties to banking have been known for quite some time, with a petition having been started earlier in the year urging her resignation. This is because both Citadel LLC and Citadel Securities have been connected to the situation, but in very different ways.

Citadel LLC helped bail out the hedge fund Melvin Capital during the early months of the GME short squeeze battle. Melvin Capital was one of the first, and most notable, casualties of the saga. Since then, short-sellers are estimated to have lost billions of dollars.

Yellen’s involvement with Citadel (either Securities, or LLC, or both), has been generating more attention due to the possibility of new government investigations into “dark pools”. Recently, SEC Chair Gary Gensler has been outspoken against dark pools, aiming to bring more transparency to the market.

The Tokenist recently brought to light that Citadel Securities runs it’s own dark pool, called Citadel Connect. This has made many worried that if an investigation takes place into these practices, Yellen will be incentivized to turn a blind eye if she is involved in proceedings, considering her ties to Citadel—and her associated financial incentives.

One email every Friday – everything that matters in the new era of finance.

Yellen has also been gaining attention for being a vocal critic of the DeFi industry. Yellen is directly pushing for an amendment to the upcoming US Infrastructure Bill that will impact proof-of-stake blockchains. In turn, this is likely to harm the DeFi market. Additionally, in February, Yellen spoke out against cryptocurrency, saying:

“To the extent it is used I fear it’s often for illicit finance. It’s an extremely inefficient way of conducting transactions, and the amount of energy that’s consumed in processing those transactions is staggering”.

In light of Yellen’s corporate ties, it is unsurprising to see her disapproving of crypto, and especially DeFi. Many traditional institutions treat DeFi as an enemy as it proves to the public that centralized forces are not always necessary in the financial world.

Yellen is by no means the only government official to be found on the institutional banking payroll– Congressman Brad Sherman was also revealed to have corporate connections. His top three biggest donors are Capital Group Companies, Blackstone Group, and BlackRock Inc, making up payments of over $105,000 to his political campaign. Like Yellen, he is also directly against cryptocurrency.

With the public getting increasingly frustrated with Yellen’s actions, it will be fascinating to see whether the pressure will get to her, leading her to rescue herself from the situation. Many investors are growing tiresome of her corporate involvement and clear biases involving the traditional banking elite. If the petition to oust her continues to grow in signatures, the Biden Administration may feel obliged to respond.

Do you think Yellen’s corporate relationships prevent her from being impartial? Let us know in the comments below.