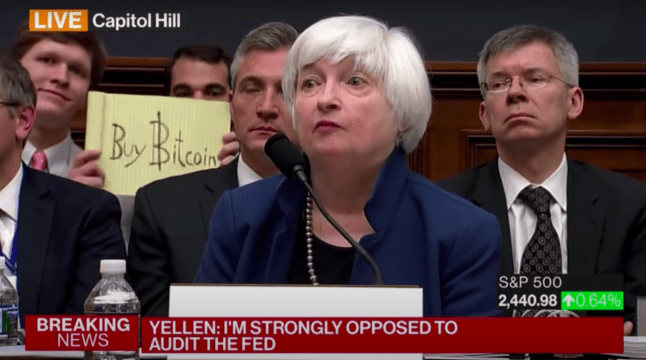 Janet Yellen Behind the Push to Cripple American DeFi

On the battleground between excessive red tape and financial innovation, both elected Senators and unelected officials side with the former. After multiple amendments have been proposed to Biden’s far-reaching infrastructure bill, the US digital asset market is still in need of a life vest.

It’s all hands on deck for the American part of the global crypto space. There are several legitimate concerns for the digital asset space that the bipartisan $1.2 trillion infrastructure bill introduces. In short, the bill redefines ‘broker’ to include all participants of the blockchain ecosystem, from miners to developers.

Consequently, such ‘brokers’ would have to implement a KYC mechanism on their ‘customers’ to fulfill IRS reporting requirements. This itself is virtually impossible, leading one to believe that the legislators themselves lack the knowledge to competently perform their elected duties.

From the original bill, not much has changed except for another tweak of the original amendment. Likewise, it is now clearer who is pushing for such aggressive regulation—which is poised to negatively impact the growth DeFi—and digital assets in general—in the US.

Who is Behind the Clashing Amendments?

The original amendment for taxing the US-based crypto/DeFi industry was pushed by the following senators:

Hence, the piece was dubbed the Warner-Portman-Sinema amendment. Since Thursday, they’ve modified the amendment to exempt proof-of-work mining and crypto wallets.

Left in this state, this would heavily impact the DeFi space given that it relies on proof-of-stake validation across almost all blockchains with smart contract programmability. For instance, Charles Hoskinson, the creator of Cardano (ADA), competitor to Ethereum, retweeted the following:

On the opposite side of the crypto fence, for more reasonable legislation that encourages the growth of American crypto/DeFi industry, are the following senators:

The Wyden-Lummis-Toomey amendment would more precisely define all the actors in the blockchain ecosystem, striking the original lines 9 through 21 on page 2437. This would clarify that brokers are only those entities who execute crypto trades on exchanges. More importantly, the aforementioned IRS requirements would not be needed from miners, liquidity providers, and individuals who are developing blockchain technology and wallets.

However, reacting to the modified Warner-Portman-Sinema amendment, Sen. Wyden embarked on a false dichotomy.

It seems that after Elon Musk’s twitter escapades, it has been ingrained in the public discourse that Bitcoin – as a beneficiary of proof-of-work – is a dangerous threat to the climate. This has recently been repeated by Sen. Elizabeth Warren in her softball exchange with Angela Walch.

Although it is easy to access the data showing that about 74% of Bitcoin’s mining comes from renewable sources, all these actors may be counting on the difficulty to verify 50% clean energy thresholds. After all, this is the nature and the strongpoint of Bitcoin’s mining network – decentralization.

Whatever the case may be, it seems that Senators on both sides are barely cognizant of the complexity and implications of their legislation. As it stands now, the modified original amendment stands to win.

According to Washington Post reporting, Janet Yellen spoke to Senator Wyden to dissuade him from limiting federal regulation of cryptocurrencies. Given his framing of proof-of-work, that mission doesn’t seem that difficult to accomplish.

“We are grateful to Chairman Wyden for his leadership in pushing the Senate to address this issue. However, we believe that the alternative amendment put forward by Senators Warner, Portman, and Sinema strikes the right balance and makes an important step forward in promoting tax compliance,”

In the bill, their legislative contribution would extract $28 billion from the crypto industry, although it is not clear how they came up with that sum. To give you an idea of the numbers in play, the non-partisan Congressional Budget Office (CBO) had already calculated the following:

“The Congressional Budget Office estimates that over the 2021-2031 period, enacting Senate Amendment 2137 to H.R. 3684 would decrease direct spending by $110 billion, increase revenues by $50 billion, and increase discretionary spending by $415 billion. On net, the legislation would add $256 billion to projected deficits over that period.”

With such tight margins and overall increased deficit, without the crypto part, the revenue would likely be left with only $12 billion. This would give Treasury Secretary Yellen a pathway to kill two birds with one stone:

The final vote should be done over the weekend. If it passes, Bitcoin should not be impacted, as it employs a proof-of-work blockchain. The modified amendment could be the result of too many Wall Street heavyweights involved in Bitcoin.

If approved, do you think this legislation will eventually carry to the global stage as well? Let us know in the comments below.