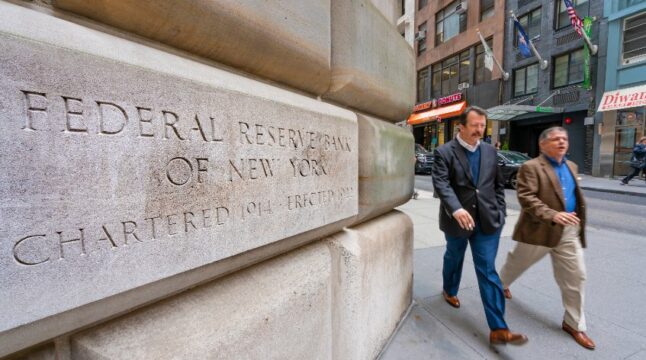 The US Federal Reserve reveals its most aggressive rate hike increase since 1994 amidst growing concerns about a recession in 2023.

Yesterday, the US Federal Reserve revealed its most aggressive anti-inflation effort, hiking benchmark interest rates by three-quarters of a percentage. The 0.75 increase marks the most significant increase since 1994, ending weeks of speculation about the Federal Open Market Committee’s benchmark.

Meanwhile, leading academic economists are tipping the US economy to enter a recession in 2023. According to a recent poll, nearly 70% anticipate an economic downturn next year due to mounting global headwinds.

The new interest rate hike has raised the short-term federal funds rate to between 1.50% to 1.75%. This represents the highest value since just before the Covid-19 epidemic began in March 2020. However, the FOMC project the value to reach 3.4% by the end of 2022 and 3.8% in 2023. This marks a departure from earlier predictions of 1.9% for this year.

Consequently, the aggressive hike was done to combat a disruptive rise in inflation and projected a slowing economy and rising unemployment in the coming months. US central bank officials hinted at a faster pace of rate hikes in the future. They believe this would align monetary policy more closely with a swift shift in financial market estimates to keep price pressure under control. They revealed,

“Inflation remains elevated, reflecting supply and demand imbalances related to the pandemic, higher energy prices and broader price pressures. The committee is strongly committed to returning inflation to its 2% objective.”

Also speaking after the decision, Fed Chair Jerome Powell said policymakers “came to the opinion” that additional frontloading was needed. As they believed it was important to get rates to a more neutral range more rapidly. He further stated that another 0.75 hike would most likely be the conclusion of the central bank’s next meeting in late July. However, he reiterated that he did not expect interest hikes of this magnitude to become the norm.

Meanwhile, the Fed’s tightening of monetary policy was accompanied by a downgrade of the economy’s outlook. Officials are anticipating a 1.7% increase in GDP, down from 2.8% in March. The unemployment rate is projected to reach 3.7% this year before hitting 4.1% in 2023. However, there was no official talk of a recession in 2023. Nonetheless, the range of economic growth estimates narrowed, and the federal funds rate will decline in 2024.

Interestingly, the Dow-Jones Industrial Average (DOW) spiked after the rate hike was announced and is up %1 on daily at the time of writing. Market participants speculate that future rate hikes will be in smaller increments after Powell’s comments.

The comments likely provided much-needed certainty and clarity on the Fed’s outlook for controlling the historic inflation rate. Additionally, the general consensus in the market was expecting a 75 BPS hike and it is likely that it was already priced in by the time it was announced.

With the Fed raising interest rates aggressively to combat inflation, many analysts see a recession imminent. However, determining when precisely the economic downturn will occur seems challenging.  Following the survey of 49 macroeconomists conducted by Financial Times in collaboration with the Initiative on Global Markets, the majority believe 2023 would be the year.

As seen in the chart, Nearly 70% of the polled experts expect a recession in 2023. About 38% anticipate it in the first two quarters, and 30% predict an official start in the second half. Only one economist believed a recession could commence this, whereas 30% say it will not happen until 2024.

However, for a recession to be official, the National Bureau of Economic Research (NBER) must detect a significant drop in economic activities over time. The generally accepted timeframe is usually two fiscal quarters. The economy dipped in the first quarter of 2022, with GDP falling by 1.5%. The Bureau of Economic Analysis will issue second-quarter figures in late September.

Consequently, the US economy entering into a recession would like to have far-reaching effects on risk-on assets. Despite being in a freefall already in 2022, many analysts believe a recession would see stocks plunge further by 40%. Although the Covid-19 recession positively affected digital assets, its increasing correlation with equities could lead to a different outcome. They believe that if the correlation persists, Bitcoin could suffer a significant drop alongside the equities market.

However, other analysts opine that a recession could cause a positive price movement for Bitcoin while the rest of the crypto market plunges. They believe this is because investors would move to risk-off assets, which they believe BTC has become.

Unfortunately, no one knows how long the imminent recession will last. The Fed hopes to stop interest rate hikes in 2024, hoping the supply will catch up with demand. However, only time can tell if their policies would produce the resultant effects.

When do you think the US economy would most likely go into recession? Let us know your thoughts in the comments below.