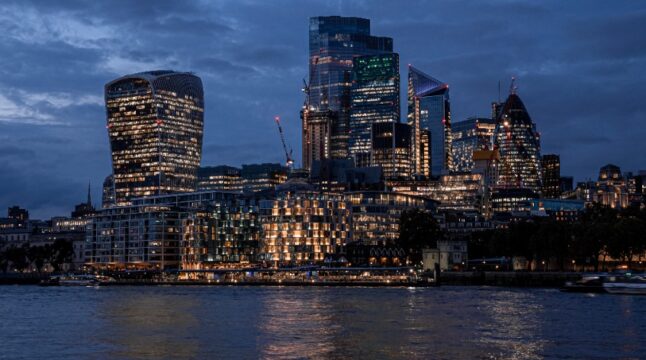 European stock indexes including FTSE100, DAX, and CAC40 are down in early Wednesday hours on the reports of UK inflation hitting a 41-year high.

FTSE100 slipped 0.1% and the regional STOXX Europe 600 Index slipped 0.8% Wednesday as UK inflation surged to the highest level in 41 years in October. Consumer prices in October rose 11.1% year-over-year, up from the 10.1% that was reported in September, according to the Office for National Statistics.

Equities and stocks in the UK and Europe are in the red on Wednesday as UK’s Office for National Statistics reported inflation of 11.1% in October 2022 – the highest in 41 years. The FTSE100 index, which tracks 100 companies listed on the London Stock Exchange, is down 0.1%, while the regional Stoxx Europe 600 tumbled over 0.8% in early trading hours.

New inflation data shows that consumer prices in the UK increased by 1% from the September report. Meanwhile, core inflation, which does not include rampant energy and food costs, remained relatively flat at 6.5% in October.

“It looks like UK headline inflation is at its peak. The fact that the government is effectively fixing electricity [and] gas unit prices below wholesale costs until next April means this is probably as high as it will get, though admittedly we expect headline rates to stay in double-digits until at least February next year.”

Other European indexes including France’s CAC 40 and Germany’s DAX are down over 0.5% and 1%, respectively. The Euronext 100, a blue-chip index of the pan-European stock exchange Euronext NV, fell by 0.4%.

Elsewhere, the US benchmark stock index S&P 500 rose by nearly 0.9%, while the tech-oriented Nasdaq 100 added roughly 1.5%. The jump in US equities came after Tuesday’s report that factory gate prices rose less than expected in October.

The somewhat slower growth in factory gate prices followed the latest consumer price index (CPI) data in the US, which showed that inflation in the world’s biggest economy came in cooler than anticipated. US inflation hit 7.7% in October, below analysts’ estimates of 8% and the September CPI reading of 8.2%.

While the new CPI report boded well for US stocks, it curbed the dollar’s impressive performance this year after hitting a 20-year high earlier in 2022. The greenback was down more than 0.3% at the time of the writing.

Do you think the US economy is better positioned to face the global recession? Let us know in the comments below.