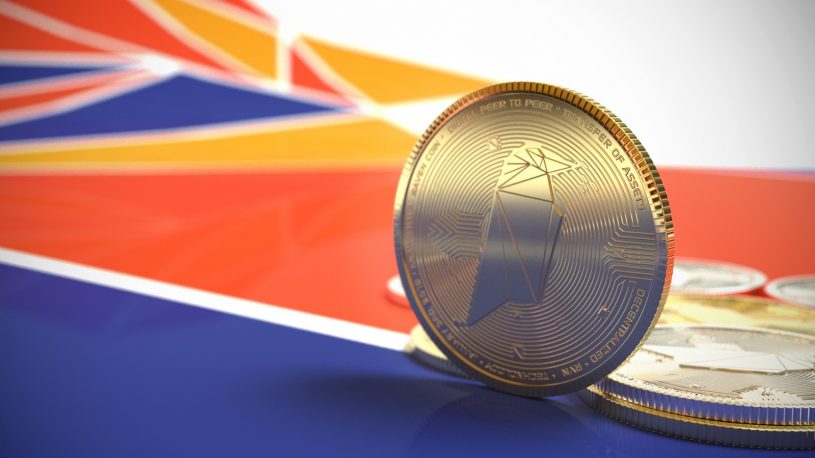 Tron Black, one of Ravencoin’s seven lead developers and co-author of its whitepaper, recently sat down for a nearly one-hour interview to describe the decentralized project. Directly from his office just south of Salt Lake City in Utah, Tron discussed a bit of the history of Ravencoin, its functionality, and some near-terms developments.

Bruce Fenton came up with the idea of Ravencoin, after a substantial career in the traditional finance sector. Bruce was also an early Bitcoin advocate, who served as Executive Chairman of the Bitcoin Foundation from 2015-2016.  His experience led him to discover the future of blockchain’s potential for the financial securities industry.

Bruce was friends with Patrick Byrne, Overstock.com’s CEO, which is actually how Tron became involved with the project. Tron works for Medici Ventures, a wholly-owned subsidiary of Overstock.com. Now, Tron is one of seven lead developers— in addition to the large community of developers, thanks to the project’s open source nature.

Cryptocurrency Regulations: Is Ravencoin a Security?

A major concern throughout the larger cryptocurrency community as of late is regulatory compliance. Recent SEC activity has targeted both ICOs and exchanges for violating securities regulations.

Due to both the regulatory concern as well as the added benefits of security tokens— which are further detailed in our security token guide— some ICOs have even been cancelled and replaced by Security Token Offerings (STOs).

Yet Tron Black isn’t concerned about such regulatory buzz affecting Ravencoin. During the interview, he explained how a New York-based securities attorney has written a memorandum where he explains why Ravencoin does not fit under the SEC’s classification of a security.

The reasoning is straightforward. Ravencoin had absolutely no fundraising. Due to the open source and truly decentralized nature of the project (everything is available via GitHub), RVN purchases are not investments in a common enterprise. Thus, there is no investment contract involved, nor any expectation of profit based on the performance of an entity other than the investor. Given such criteria, Ravencoin does not constitute a security according to the Howey Test, which is the SEC’s instrument in determining securities.

The argument is strengthened as SEC Chairman Jay Clayton has stated that Bitcoin is not a security. Ravencoin is a fork of the Bitcoin code, and operates in a very similar decentralized manner.

However, it is crucial to point out that the classification of Ravencoin as ‘not a security’ only applies to the purchase of RVN in and of itself. As Tron explains,

The points made by Tron articulate the unique situation that is Ravencoin— a platform which, as explained by Bruce Fenton, has a primary design for security token creation and issuance.

The majority of compliant security tokens currently operate as ERC-20 compatible token standards on Ethereum. Programmable smart contracts allow for companies to ensure that regulatory compliance is algorithmically and transparently enforced, providing a peace of mind in the midst regulatory crackdown.

Tron commented on the user-friendly nature of Ravencoin when compared to Ethereum:

“I don’t know if we’re trying to replace Ethereum or something like that. Although I would argue that, for the purposes of an ERC-20 token, we are far easier to use. So I think that will go a long way.”

While Ethereum is the current leader of security token standards, the programming language of smart contracts is typically confined to specialized developers. The beauty of smart contracts lies in the ability for developers to create their own protocols and token standards, which are set to abide by the rules they establish. As blockchain technology continues to expand beyond areas of digital currencies like we see with Bitcoin, Ethereum has witnessed significant success.

The user-friendly capabilities of Ravencoin seem to suggest— as described by Tron— that Ravencoin has the potential to emerge as such a frontrunner, and could perhaps even become the Ethereum of security tokens.

During the interview, Tron was asked if Ravencoin had any sort of plan to switch from its current Proof of Work consensus mechanism to a Proof of Stake system. Tron said he isn’t against such a proposal, but he feels as though Proof of Stake models often result in an unfair initial issuance of tokens. Mining, he holds, provides for a more balanced and dispersed method of distribution— at least at first. His comments certainly suggest that Ravencoin will stick with Proof of Work for quite some time.

Concerning a roadmap, Tron pointed out three features which will be added to the platform in the near future: messaging, dividends, and voting.

Currently, users can add metadata with the issuance of tokens. This can be used to describe details concerning the digital version of real-world assets which are tokenized on the network. As early as Q1 of 2019, users will also be able to include metadata in transactions to send messages to those who hold their tokens.

Methods of distributing dividends and hosting votes are also in current development. Dividends are clearly an important feature for security tokens, as they would allow companies to share profits with token holders in a transparent manner.

Voting is also an important aspect— many equity rights include voting privileges. To illustrate its utility, let’s say a company owner is considering franchising his business. The owner could create a vote on the Ravencoin network through various methods. One could include two wallet addresses— one of which represents a ‘yes’ vote, the other representing a ‘no’ vote. Token holders could be provided with certain voting tokens (ballots) to cast their vote, and the entire community would be able to see the end result without any dispute.

With less than one year in operation, Ravencoin has witnessed a notable amount of success and has acquired a rather large following of active users in its community. To those individuals, Tron relayed the following message:

“To the Ravencoin community, thanks for your support. We’re trying to create tools and things that you can build on top of this, so that’s really what it’s for. Please come and keep building!”

What do you think of Tron’s points during the recent interview? Do you think Ravencoin has the potential to become the ‘Ethereum of security tokens’? We’d love to know what you think in the comments below.