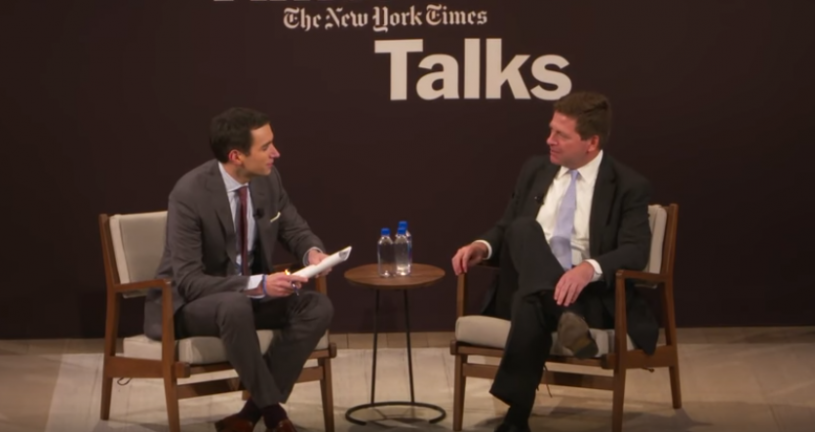 SEC Chairman Jay Clayton recently sat down with Andrew Ross Sorkin of The New York Times to discuss the applicability of securities laws to cryptocurrencies.

Clayton was sworn into his position in March of 2017, and officially took office the following May. When he was sworn in, he was not asked a single question related to blockchain or cryptocurrencies. Since that time however, he has been very active in related discussions.

A common debate concerning DLT and securities regulations centers upon security tokens. Some believe that tokenized securities need new laws— that the SEC’s current legislation fails to properly account for security tokens. Others claim that existing laws are sufficiently suited for the emerging industry.

Jay Clayton has consistently implied that security tokens— and the majority of cryptocurrencies for that matter— are subject to the existing securities laws as established by his commission.

During the interview, Clayton explained,

“My view is that our rules have stood the test of time. I’m not going to change [investor protection] rules just to fit a technology.”

Clayton went on to praise the historic success of the Howey Test, which is the SEC’s instrument used to determine securities.

“What’s a security?…The folks who came out of the [1939 financial] crash and crafted the rules, those men and women were geniuses [who made the Howey Test]. If you offer a token…and you are expecting a return for it, that’s a security…and its ripe for fraud […]. We’ve created a $20 trillion economy based on those rules.”

Several times throughout the interview, Clayton reiterated that the SEC’s purpose lies in investor protection.

The Future of Security Tokens and SEC Regulations Explained

Clayton displayed a positive outlook on the integration of DLT and the capital markets industry. He did admit however, that enterprises which market ‘decentralized’ securities using DLT are likely to run into some friction.

“I expect that over time that Distributed Ledger Technology will become part of the market ecosystem. What I’m not willing to say is, ‘You know what? If you want to raise money in a public offering, you used to have to give people financial statements. You used to have to take responsibility for disclosure, but this technology is so good, we’re going to get rid of that protection.’ I’m just not going there.”

The reasoning, says Clayton, involves the inherent responsibilities embedded in securities. When it comes to smart contracts, Clayton is skeptical as to how they can account for all necessary responsibilities.

“Our securities laws do produce responsibility…underwriters and accountants [are held responsible]…We almost take it for granted…[But] if you are going to distribute an ecosystem and say no-one has responsibility…well hey, nothing better go wrong.”

If something does go wrong, the SEC is likely to take action— just as they’ve done recently.

Within the past month, the cryptocurrency community has experienced a wave of increased regulatory enforcement.

The SEC has charged both ICOs and exchanges with securities violations. Even state regulatory agencies— as seen in Colorado— have shut down ICOs.

With the increased regulatory enforcement in the cryptocurrency space, a shift towards security tokens has begun. How the SEC will officially respond to this transition, is yet to be seen.

What do you think about SEC Chairman Jay Clayton’s recent remarks? How will security tokens account for the inherent responsibilities of traditional securities in an automated manner? We’d love to know what you think in the comments below.