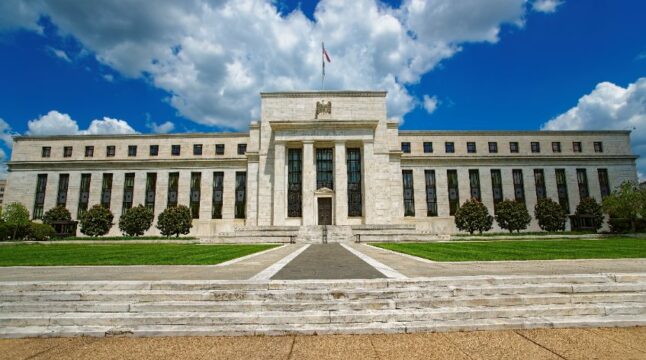 Financial experts are clamoring for a more aggressive interest rate hike in a desperate attempt to slow down the racing inflation figures.

Following the release of the higher than estimated CPI inflation data, the possibility of a 100 basis points (bps) hike has increased. Reports suggest that futures on the federal funds rate have raised the likelihood of a full percentage point increase at the Federal Reserve meeting later this month.

Data from the CME Fedwatch tool suggests that the probability of a 100 basis-point raise this month is 41%. This value had surged up to 81% on Wednesday after the labor department released the CPI data before declining. The chart shows that the market anticipates a 75 bps raise by the Feds, with a 59% chance attached.

Initially, the consensus among economists before the CPI data release was that headline inflation would range between 8.7%- 8.9%. This allowed for speculation over the possibility of a 50-75% interest rate hike by the Feds in July. With the Federal Reserve hoping to risk the case of a recession to grind the galloping inflation to a halt.

The subsequent release of the inflation data by the Labor Department says the actual values exceed what was anticipated. The Consumer Price index rose in June on both a monthly and annual basis by 1.3% and 9.1%, respectively. This has all but canceled the notion of a 50 bps raise, with the 75-100 bps hike more likely.

While speaking to reporters, Wharton professor Jeremy Siegel called for a 100 basis point rate hike saying markets may be “close to the bottom.” He claimed that the aggressive hike by the Feds was the medicine needed to stop the inflation. He said,

“The Fed needs to grab the narrative of inflation. You got to take your medicine now to get cured. If you just let it go, you’re going to have to take more medicine later on.”

Furthermore, Siegel claimed Fed chief Jerome Powell could defend such a forceful decision. By combining the anticipated 50 basis point hike for June with the expected 50 basis point boost for July. He reiterated that anything short of this would indicate to the markets that the Federal Reserve does not have inflation under control.

Implications of a Potential 100 BPS Hike

To tackle inflation at a 40-year high, the Federal Reserve needs to increase its interest rates aggressively. However, doing so risks sending the economy into a recession. The interest rate hikes have seemingly confirmed a recession for 2023 as the 2-year/10-year yield curve inverted after 15 years—a sure signal for an impending recession.

Consequently, a 100 bps would slow the economy while likely bringing inflation under control. However, reports suggest that a market surge may be on the cards if the Fed successfully tackles the inflation issue. This is because investors and firms have all started to factor in the higher rates while downgrading their earnings forecasts.

Meanwhile, there have been calls for investors to avoid panic amidst the Feds’ possible aggressive hike. Nonetheless, Siegal believes that after raising the interest rates by 100 bps in July, the Feds should allow its effect to show in the economy. He warned that further similar hikes would trigger a severe recession and reiterated that the markets have already factored in a mild recession in 2023. He said,

“I think you will get a rally, and [while] it is very hard to pick exact market bottoms, I think we are close to the bottom. The rally will unravel within “hours” of the Fed’s announcement. “

Finally, he said that if the Fed makes a significant move on Wednesday, inflation should decline by the end of the year. Also, he opined that if commodity prices start to follow stock markets into bear territory, the US economy will reign in inflation.

After yesterday’s opening, stocks had a steep decline before slowly rising. The S&P 500 dropped 0.3% to reach 3790.38. The Dow Jones Industrial Average finished at 30630.17 after falling by 0.5%, marking another five-day losing streak for the blue-chip index. Meanwhile, the Nasdaq Composite Index rose by less than 0.1% to close at 11251.19.

Do you think the Feds would hike the interest rate by a full percentage at its next meeting? Let us know your thoughts in the comments below.