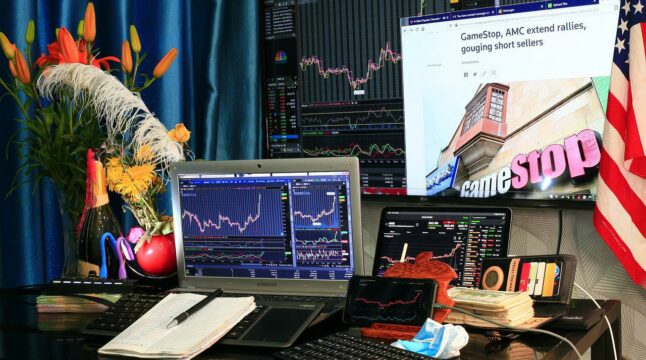 Gamestop released its first-quarter earnings for 2021, surpassing general market expectations for the video game retailer. The company recorded $1.38 billion in revenue, up marginally from $1.27 billion a year ago. However, it also recorded a net loss of $157.9 million, more than the $66 million lost in Q1 2021.

Despite not turning a profit, its substantial revenue for the quarter has led to a surge in Gamestop’s share price. Largely due to retail investors’ interest, the stock increased over 11% throughout the day on Thursday. Nonetheless, for the year to date, the share price is still down by 10%.

For the first quarter of 2022, Gamestop reported an 8% growth in sales to $1.38 billion. However, its loss per share widened to $2.08 from $1.01 a year earlier, beating the general expectation. Several analysts had expected a more significant loss for the company, with $2.49 per share on $1.32 billion in sales, as the consensus.

Furthermore, a breakdown of its revenue shows that GameStop sold $673.8 million in hardware, such as game consoles and peripherals. This accounted for 48.9% of its total sales and was down 4.2% from $703.5 million recorded a year ago.

Consequently, Gamestop beating the general market expectation has led to several analysts raising their price targets. Stephanie Wissink, a Jefferies analyst, raised her GME target to $110 per share from $90 after being “encouraged” by the company’s progress.

Last year, Gamestop was heavily involved in a social media trading frenzy in the early part of 2021. It was the subject of an intense battle between retail investors and wall street hedge funds looking to short the company.  This caused GameStop’s share price to soar over 600% last year, as investors continued to purchase GameStop stock at a rapid pace.

Also, its status as a meme stock saw it subjected to a parody video by the SEC in a new commercial called “Investomania: Meme Stocks”. However, the regulatory body has continued to be on the receiving end of backlash from investors. Many of whom have taken to Twitter to voice their displeasure.

NFTs to Play a Role in Gamestop’s Future

Gamestop’s Q1 earnings clearly show that NFTs would play a critical role in the company’s future. Since the 2021 frenzy, the company has revamped its leadership and made a concerted effort to shift its focus from physical products to digital ones.

The company unveiled plans to launch an NFT marketplace alongside a wallet in May 2021. Later on, it posted job listings for Web 3 and NFT developers. Meanwhile, it was rumored that GameStop would partner with Loopring, an Ethereum Layer 2 solution, to develop its NFT marketplace. However, it ultimately chose Immutable X, citing the platform’s zero gas prices for trading and minting NFTs in a carbon-neutral environment.

However, Gamestop finally launched its digital wallet in May while hinting at its NFT marketplace scheduled to launch later this year. The wallet will enable users to store, send, receive and use cryptocurrencies and NFTs while also accessing the marketplace.

Consequently, Gamestop CEO Matt Furlong reiterated to analysts and investors that the company would continue to embrace change. He further said that his firm would continue to put customers first while focusing on long-term shareholder value and company transformation.

“Our growth and the launch of new tech products, such as our digital asset wallet and the upcoming NFT marketplace, demonstrate that we are, in fact, starting to transform.”

Do you think Gamestop’s pivot to NFTs would see the company continue to beat market expectations? Let us know your thoughts in the comments below.