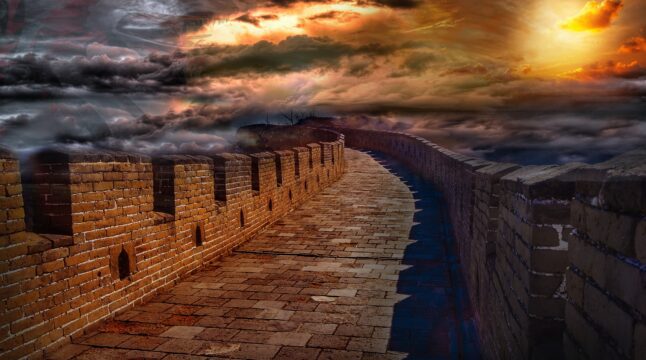 Some Chinese residents could be continuing to defy the government by holding digital assets.

Once again, China has tried to ban cryptocurrencies, this time making it illegal for Chinese residents to trade digital assets. However, with around a third of Chinese internet users making use of VPNs (a virtual private network) to get around internet restrictions and access exchanges overseas, how enforceable is this ban?

After a previous push to ban cryptocurrency mining and exchanges, China’s Bitcoin mining footprint decreased from 64.81% in April 2020 to 46% in April 2021.

More recently the People’s Bank of China (PBoC) announced aggressive measures to eliminate cryptocurrencies from the world’s most populous nation:

Bitcoin has now recovered these losses and the price looks to have been unaffected by the ban after the weekend.

Exchanges that are tied to China, but have expanded since were hit the worst. OKEx and Huobi have had their tokens – Huobi token (HT) and OKB token – drop by over 20%. In response, Huobi announced it will no longer accept new users that use a mainland China phone number.

The motivation behind the various crypto bans from China in recent years is likely because it doesn’t want the competition for its CBDC, the digital yuan, which has already been tested by 139 million people.

China typically copies US apps to create versions it has more control over, so they can be reigned in when needed. Examples of this include Google, WhatsApp, and Amazon – which have produced Chinese counterparts in Baidu, WeChat, and Alibaba respectively.

The Extent of China’s Great Firewall

It is now clear that half a dozen corporations are arguably more powerful than many nations are in setting news agendas and policies. Google, Facebook, and Twitter have proven to be very influential in the outcome of elections in the West for instance.

The Chinese State has circumvented this problem by creating its own versions of each platform. Moreover, in 1998, China created a techno-legislative shield that restricted internet access between China and the rest of the world. Nicknamed the “Great Firewall of China”, the restrictions include IP address blocking, packet filtering, sophisticated content filtering, keyword scanning, and speech and facial recognition software.

Surprisingly enough, VPN services, the only way to circumvent such blocks, are not banned in China. However, there is a catch.

To get around China’s Great Firewall, 31% of its internet users use VPNs according to a Statista survey from 2017. Technically, VPNs in China are not banned, but only those that are government-approved, i.e., authorized by the Ministry of Industry and Information Technology (MIIT). Otherwise, unauthorized VPNs are removed from app stores, and users are subjected to fines.

A major reason VPN services have not been totally banned is that China collects massive amounts of data from around the world. According to Strike Source research, out of 30 popular VPNs, 62% of them are secretly Chinese-owned. This means China has access to 20% of the world’s private data.

Nonetheless, VPNs (Virtual Private Networks) are used by many internet users to secure their privacy by encrypting access to the internet. More importantly, VPN services fake a user’s geolocation by connecting to global servers, thus bypassing geo-restrictions and blocked content.

In recent years, this has included access to video games and cryptocurrency exchanges. Clearly as a part of a larger control imposition, gaming has also come under scrutiny. On August 30, the National Press and Publication Administration (NPPA) put out a rule to limit gaming time for those under 18 to between 8pm and 9pm – only on Fridays, Saturdays, Sundays, and statutory holidays. However, according to a Niko Partners report, gamers “may bypass the new rule by logging into global servers via VPN and avoid the time limits”.

Just like with crypto trading, this is a remarkable restriction. However, it is still a rule, mainly relying on conformity to be enacted, not direct enforcement. There are simply too many people to be able to enforce this effectively.

It is difficult to see how any of this can be enforced beyond creating social pressure unless the internet itself is banned – an unlikely move considering the economic benefits of the internet.

Do you think China’s crypto ban will work this time? Or do VPNs make this impossible? Let us know in the comments below.