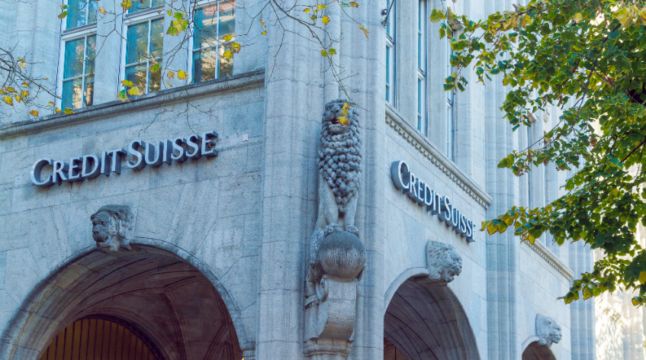 Executives have reassured employees of Credit Suisse's "strong capital base and liquidity position".

Over the weekend, Credit Suisse (CS) raised global concerns over its financial stability. After the bank’s credit default swaps jumped to a decade-high level on Friday, CS CEO, Ulrich Koerner, spent the weekend reassuring investors that the bank will survive.

On Friday, Koerner issued the following memo to CS employees:

“…in particular, given the many factually inaccurate statements being made. That said, I trust that you are not confusing our day-to-day stock price performance with the strong capital base and liquidity position of the bank,”

Is there a cause for concern?

What is Going on with Credit Suisse?

The Switzerland-based Credit Suisse is not just another commercial bank. It is a vital cog of the global financial system. Sovereign Wealth Fund Institute (SWFI) ranks CS as the world’s 23rd largest bank and the second largest in Switzerland. According to July’s earning report, the bank managed $1.4 trillion worth of assets.

However, this is a -12.2% AuM drop from H1 2021. The bank attributed the decline to -29% decreased revenue year on year, driven by a -43% drop in Investment Bank (IB) revenues. At the same time, the Asset Management (AM) revenue went down by -25%. Year-to-date, Credit Suisse (CS) shares aligned accordingly, losing 60% of value.

According to S&P Global Market Intelligence, last Friday, Credit Suisse’s five-year credit default swaps (CDS) increased by 6 bps, nearing 247 bps as the highest level in a decade. On Monday, CDS further climbed to 355 bps, the highest in over two decades, from the year’s start at 57 bps.

Credit default swaps (CDS) are financial derivatives used for insuring exposure of the lender’s debt. In other words, these derivatives swap debt (such as bonds) risk with a counterparty. CDS credit spread, expressed in bps (100 bps is 1%), is the difference between a corporate bond and a sovereign bond, such as a Treasury note.

Therefore, the higher rate translates to higher risk. In addition to higher CDS risk, Credit Suisse bonds denominated in euros (CSGN.S) hit a record low this Monday. Those that are long-dated suffered the worst decline: 2032 bonds dropped under 70 euro cents, while 2033 bonds dropped to 53 euro cents.

When such a large bank as CS is viewed as risky, it doesn’t take much to inject financial contagion, similar to what the digital asset space has seen post-Terra collapse. When both the Fed and ECB started raising interest rates, this changed the dynamic of debt servicing.

According to Credit Suisse’s most recent Fixed Income investor presentation, the bank holds about $200 billion in short and long-term debt. Customer deposits make the bulk of the bank’s funding, at 53%, with the rest relying on debt and other liabilities. Over half of the bank’s long-term debt consists of over-three-years maturity debt.

The question is, for Credit Suisse liabilities to remain stable, how are those loans collateralized? After all, we have seen what happens when a collateral, such as LUNA, drops and de-pegs UST stablecoin. For Credit Suisse, this “peg” relies on three main pillars of operations:

While the bank frames this as “highly collateralized” debt, the level of vulnerability is poised to increase if the market goes down further into a deep recession. This is in addition to rising CDS credit spreads, which make debt difficult to refinance.

The decline of CS shares acts as another signal pressure in that direction, which is why CS engaged in emergency customer assurance over the weekend. After the $4.7 billion dollar Hwang incident, the bank outlined a strategic plan in July to ”evaluate strategic options for the Securitized Products business, which includes attracting third-party capital”.

Do you think Europe’s energy crisis will topple the financial system? Let us know in the comments below.