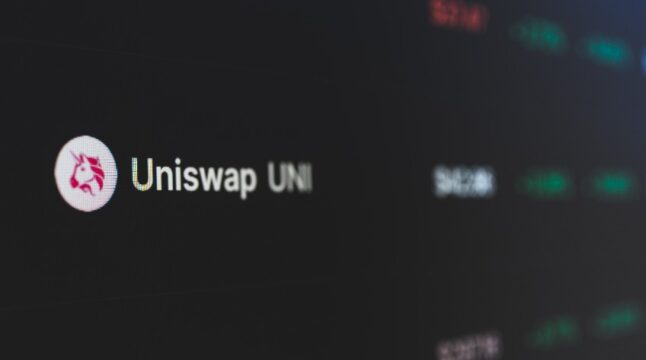 Having gone through three major upgrades, the largest decentralized exchange Uniswap (v3) released a new privacy policy on Friday. In a post-FTX period, where people are withdrawing their assets from centralized exchanges, Uniswap clarifies the roles between a company and a DeFi protocol.

Uniswap’s new privacy policy revealed what user data is being tracked and for what purposes. Notwithstanding dYdX’s biometric hiccup, all DEXes are free from know-your-customer (KYC) identity verification. Accordingly, Uniswap logs publicly available blockchain data, such as wallet addresses, which are screened for illicit activity.

This is a likely reference to TRM Labs, having partnered with Uniswap in April. Based in San Francisco and headed by Esteban Castaño, TRM receives Uniswap’s addresses which are then analyzed for illicit activity. Not limited to DeFi, TRM also provides its analytics services to Coinbase, Binance, and Shopify.

Up until November 9th, TRM Labs has raised $149.9 million to provide digital asset compliance. Across six funding rounds, TRM had notable TradFi investors: Goldman Sachs, Visa, and even PayPal Ventures, at $4.2 million. PayPal suffered a user exodus this year after stepping outside its financial purview into social policing.

As for non-blockchain data, it bears keeping in mind that Uniswap is also a web interface anchored to smart contracts. As such, Uniswap can track associated data: cookies, mobile device ID, web beacons, OS, browser type, and other web-session-related data.

All of which can be user-blocked using standard browser plug-ins and privacy settings. Uniswap notes this data is anonymized and analyzed in aggregate to improve user experience. Uniswap doesn’t collect personal information (emails, addresses, IPs, names), so they are not shared with third parties.

To ensure this data flow doesn’t turn into a classic Web2 situation where user info is intercepted, Uniswap set up a ”reverse proxy server that sits between user devices and any third-party tool”.

If Uniswap receives a wallet address block list, as it happened when OFAC sanctioned Tornado Cash, it shares both trackable off-chain and on-chain data with government agencies (if compelled) and service providers.

For example, both Uniswap and MetaMask use Infura as the Web3 infrastructure backend. This is why Tornado Cash was no longer able to function after Infura blocked access, despite TC’s smart contracts still running on Ethereum. In that specific case, Uniswap blocked 253 wallet addresses, according to Yearn Finance developer Banteg.

Only the first layer is resistant to third-party interception, whether that be the government or a service provider.

Will Uniswap Catch the CEX Withdrawal?

Since then, there has been nothing but FTX contagion news, from Genesis to Grayscale Bitcoin Trust (GBTC) trading at over -42% ATH low against its BTC holdings. In the middle of this centralized fallout, the Uniswap team, led by Hayden Adams, continues to cement its DEX market share.

According to CoinGecko, Uniswap (v3) makes 60% of all DEX trading volume, followed by PancakeSwap, Curve, Dodo, and Balancer. Up until October 13th, Uniswap raised $176 million across two funding rounds, led by Polychain Capital and Andreessen Horowitz.

When it comes to trading volume, Uniswap is neck-in-neck with Coinbase. This is quite impressive considering Uniswap has fewer than 100 employees while Coinbase has over 4,700.

Moving forward, Uniswap is testing its new pilot “fee switch” proposal, overwhelmingly approved by UNI stakeholders in July. This would be Uniswap’s self-monetization milestone, as toggling the fee switch would allow Uniswap DAO to bolster its liquidity pools. To run smoothly, deep liquidity is a necessity for any exchange. Last week, Alastor delivered a strategic report on Uniswap fee implementation, which should be implemented in four stages to secure Uniswap’s standing in the competitive future.

Although they have some infrastructural vulnerabilities, do you think non-custodial wallets like MetaMask will eventually replace custodial CEX accounts? Let us know in the comments below.