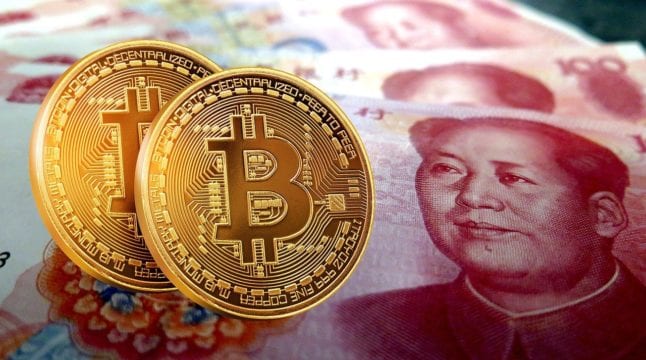 US officials have prompted investigations into cryptocurrency efforts. A recent report shows concerns over China’s lead.

China is a dominant figure in world politics, and this has become a concern for some western nations. China’s influence in global policy, economics, science, and technology has left some countries scrambling to catch up.

Blockchain and cryptocurrency is one space where it has grown its influence, both in terms of mining and CBDCs. As noted by Deutsche Bank, the technology features strongly in the country’s comprehensive tech strategy. This has caught the attention of intelligence officials in the US, who have contacted financial regulators about the matter.

The Washington Examiner published a report on November 24 showing evidence of authorities’ concerns for China’s mining dominance. According to the report, Director of National Intelligence John Ratcliffe contacted SEC Chairman Jay Clayton regarding the matter.

“There are serious national security concerns about China’s control over Bitcoin and Ether… The president’s recent executive order made abundantly clear the threat posed by securities investments that finance Communist Chinese military companies. Digital currency controlled by the CCP could certainly fall into that category, but the bottom line is that we cannot allow China to dominate the technologies and innovations that are going to decide who runs the world for decades to come — from artificial intelligence to digital currency, and everything in between.”

Ratcliffe’s concern relates to the fact that 65% of Bitcoin miners are located in China. The report also refers to a letter by Sen. Tom Cotton, which said the SEC has only deemed “Chinese-controlled Bitcoin and Ether” as non-securities.

The US is indeed lagging when it comes to this technology. But what of a nation-state attack? Could the Chinese government have a worrying influence on Bitcoin through these miners? The worst-case scenario is that the government seizes all of the mining equipment.

But even in that event, the repercussions are limited, as pointed out by Bitcoin engineer Jameson Lopp. The Bitcoin network operates well enough that any suspicious activity is immediately detected. Seizure of these mining resources would only result in short-term outages that would see the equipment rendered ineffective.

What about CBDCs and general innovation? Here China has more influence, only because it is taking steps to innovate. The country has already run multiple research and development initiatives, leaving others behind.

China has spent much of 2020 testing its digital yuan in pilot programs — which have, undoubtedly, been a success. Officials tested the CBDC in Shenzhen, and a pilot will also be conducted in Beijing. The most recent estimates put the financial value of CBDC transactions at over $300 million.

China’s Premier Xi Jinping has made fintech a key area of his agenda, as revealed by the digital yuan’s documentation. And that $300 million figure is indeed impressive for the short time that the pilot has been active. But this is a part of the overall strategy — the focus includes applications in logistics, administration, and smart cities.

Goldman Sachs predicted that the digital yuan could reach 1 billion users by the end of the decade. At the current pace of China and its competitors, that could very well be the case. But a lot can happen quickly — and the past few years in the crypto industry is proof of that.

Is China’s CBDC a Real Threat?

How much of a threat would China’s lead in digital currencies and mining be? There are enormous cost savings and efficiency improvements with blockchain solutions. But would that alone offer a significant advantage over other nations?

The truth is that the industry is so nascent that we cannot be certain about this happening. This is why the technology is undergoing multiple pilots. And there is a lot to be done before it sees full-scale implementation.

It could be that the US government and western nations are holding off for fear of rushing into the technology. This may be a gamble, but it is an obvious truth. There are a lot of untested elements with respect to blockchain, and even insiders caution realism.

But China’s command will be limited to CBDCs, as true cryptocurrencies are inherently decentralized. Even if a majority of mining locations are located in China, that alone is not enough to establish Chinese dominance.

The real concern is the nation dominating an overall industry presence — with blockchain solutions in various industries. China’s economy is one of the strongest, giving it much more headway in the future.

Can the US Catch Up to China’s CBDC?

As for the United States, there is no doubt that they are some distance away from China — and other countries. Some executives, like former CFTC Chairman Christopher Giancarlo, are leading dollar CBDC projects. The SEC has ramped up its supervision, though some would argue that it needs to quicken broader regulatory decisions.

With regard to a dollar-based CBDC, there is certainly time for the US to enter the market. There are likely several US-based technology companies that will jump at the chance to help design it. And it would certainly see use, as the country is one of the hottest cryptocurrency markets.

But there’s no question that the US has to get started soon, for time moves quickly in space. The window of opportunity is narrowing for all nations to make a mark with fintech solutions.

China is certainly the dominant player when it comes to companies in the space. Its mining dominance is less of a concern, as it is not as consequential. On the whole, US officials are right to want to accelerate research and development.

This goes for all nations — making the most of the opportunity right now will result in exponential benefits. It may be a task to design new regulations for a new asset class, but that is a necessary pain. If not, anyone lagging will see themselves playing catch up for a long time.

What do you think of the opinion of the US national intelligence officials? What should be done to accelerate regulation and development? Let us know what you think in the comments below.