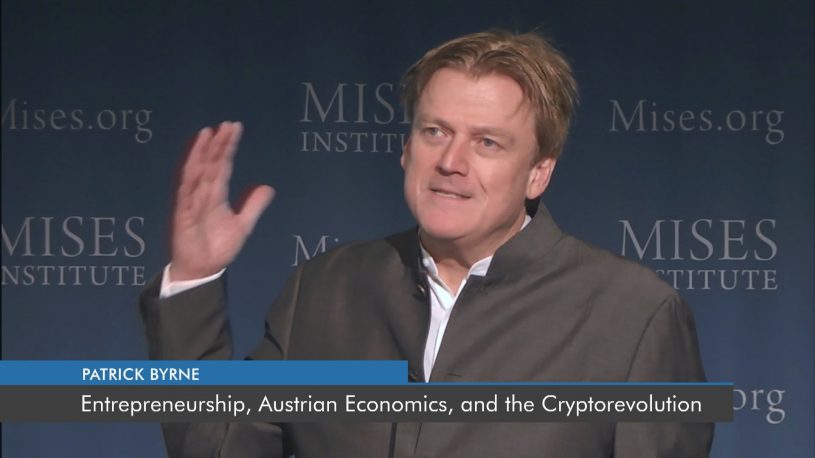 Patrick Byrne, Overstock CEO and blockchain visionary, recently sat down with Derek Schloss from The Digital Wrapper. The following is a summary of their discussion concerning the future of security tokens, numerous tZERO updates, and a potential use-case for Ravencoin.

Patrick Byrne on the Future of Security Tokens

Many agree that the highly anticipated future of security tokens will come to fruition. When asked about his own thoughts on a specific timeline for the future of tokenized securities, Byrne responded with the following:

“I think that all new issuances will be tokenized five years from now. I wouldn’t be surprised if that happens more quickly. Perhaps in three years, every new stock, bond, anything being sold…is actually a token. But there would still be the legacy instruments out there — probably ten years from now it will all have been rolled over. So, I think that’s probably the correct way to say it. Within three to five years, all new instruments will be coming out as tokens, and by ten years all instruments will have rolled over to be tokens. I would imagine that’s the truth.”

Byrne also discussed a few updates related to the tZERO platform, which went live in January 2019. The cost of producing the tZERO platform was more than $100. In explaining the reasoning for such an expense, Byrne described how half the amount covered the purchase of SpeedRoute.

The acquisition was largely strategic. SpeedRoute is a routing company which routes “up to 75 million shares a day on Wall Street”, said Byrne.

“The reason we bought SpeedRoute was that once we built out tZERO, we would be connected to everybody. Through SpeedRoute, we’re already connected to 150 brokers across Wall Street. We want tZERO to run for several months to get it robust. But we now have the technical capacity potentially to leverage relationships with the 150 brokers, who themselves have millions of clients, to drive tZERO strategy. And the whole market, and especially the whole institutional market, will be connected into our tZERO platform.”

Yet besides the acquisition of SpeedRoute, tZERO solves an even more fundamental problem which is prevalent among trading today: unnecessary settlement cycles.

“With security tokens, all of these [settlement] shenanigans go away. What it’s really all about is that historically we’ve split trading from settlement. Today, we have this process where you and I trade, and then the settlement is this other thing that happens three days later. In that divorce is the room for the different kinds of mischief and systemic risk. But if you reunite them, and that’s really the magic of tZERO, all sorts of opportunities for mischief dissolve. That’s why the tagline for tZERO is: The trade is the settlement.”

How Ravencoin Provides a Solution for Vinsent

Ravencoin is an open-source fork of Bitcoin designed to handle the issuance of both assets and securities. Lead developer for the project is Tron Black, a principal developer for Medici Ventures— the blockchain subsidiary of Overstock.

Byrne went on to describe Ravencoin and its potential as a solution for Vinsent, a fine wine company:

“We have twenty different blockchain companies within Medici Ventures — what we are doing, where possible, is leveraging and integrating Ravencoin into these different projects. So for example, we’re invested in an Israeli company that’s doing a blockchain supply chain system for wineries. Ravencoin is the preferred solution for that company. We’re in the same process now with tZERO. tZERO is blockchain agnostic, and Ravencoin won’t be the only chain underlying tZERO, but people will be able to issue security tokens on Ravencoin. You may see it emerge in a number of our projects, like ConsenSys did with Ethereum.”

When it comes to the remainder of 2019 for tZERO and security tokens, Byrne ended the interview on the following note:

“You’ll see us introducing other tokens, and we’ll start expanding our model. We’ll start using Overstock to market tZERO and get adoption of wallets and things like that — we have 50 million customers at Overstock. We’re looking for the right issuers. We have a solid pipeline of issuers who could issue tokens. We’re also looking for established companies who want to issue a security token of some classic stock they already have. There’s a focused team working on DLR’s. DLR’s, designed in compliance with regulatory requirements, solve the whole settlement problems associated with short selling that I was on about a decade ago. You’ll see that develop, and you’ll see a bigger issuance platform get introduced. And then we’re really off to the races.”

What do you think about Byrne’s discussion of security tokens and updates concerning tZERO? How long will it take for the adoption of tZERO to reach Wall Street? Let us know what you think in the comments section below.