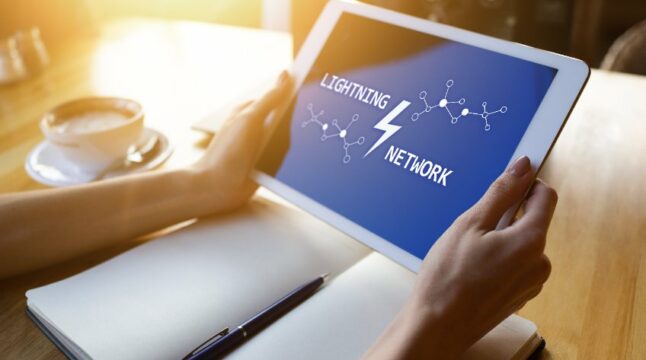 The Lightning Network seeks to address Bitcoin’s slow throughput while maintaining the network’s security. By using it, millions of users can send fractions of a bitcoin simultaneously and at lightning speed. This helps address the scalability issue that plagues Bitcoin as a means of payment, a problem that has primarily hindered its mass adoption.

The Lightning Network was introduced in 2016 but did not gain mass appeal until January 2018. The protocol operates as a secondary transaction layer, independent of the blockchain. Two users start an LN channel by adding Bitcoin to a smart contract. Then, they can move coins among themselves without causing activity on the network.

Eventually, once their transaction is completed and the channel closed, only the net amount is settled on-chain as a single payment. Thus, only two transactions are entered into the blockchain, one to open the channel and the other to close it. Therefore, allowing the system to handle significantly higher volumes of payments in this fashion.

The working paper’s data clearly details the lightning network’s effect on congestion and fees within the Bitcoin blockchain. The chart shows that before the LN’s introduction, pending transactions in the Mempool were, on average, over 50,000. Some spikes saw this value reach north of 200,000 around May 2017 and January 2018.

The Mempool refers to a waiting area for Bitcoin transactions that a full node maintains for itself. Once a transaction is verified, it sits in this pool until a miner picks it and inserts it into a block. Upon the introduction of the LN, pending transactions in the Mempool declined drastically, averaging far less than 10,000. However, a slight drop in the number of LN below 40,000 saw a corresponding increase in pending transactions.

Aside from reducing congestion, the Lightning Network has also significantly affected the fees charged on the blockchain. Before the introduction of the LN, Mempool’s pending transaction fees reached almost $2.5 million. Subsequent charges have barely reached $100,000, as seen in the chart above.

Overall,  the research suggests that the Lightning Network’s off-chain netting advantages can improve Bitcoin’s scalability and payment functionality. The proper implementation ensures that Bitcoin can fulfill its original intention as a decentralized payment system.

Growing Adoption for the Lightning Network

Data from the research only covers a short period between January 2017 and September 2019. However, the Lightning Network has come in leaps and bounds, proving to be an excellent Layer-2 solution for the Bitcoin blockchain.

Consequently, 2021 was a significant year for the protocol as it saw increased adoption with the likes of Twitter integrating it on the platform. The chart shows that the network’s capacity grew by over 181%, from 1058BTC to 2968BTC in the first eight months of 2021.

Theoretically, by offering speeds of up to one million TPS at about 0.04 cents, there has been a sky-high demand for the protocol. As of December 27th, 2021, the Lightning Network could handle a cumulative volume of $168.6 million, or 3,308 BTC. This was a 433% increase from the beginning of the year, leading to questions about Bitcoin competing with other payment processing platforms like VISA.

Current estimates from Archane Research suggest that over 80 million people had access to Lightning Network payments on an installed application as of March 2022. Meanwhile, the number of settlements has roughly doubled over the last year, while the value has increased by over 400%.

In conclusion, the Lightning Network has gone a long way in addressing the scalability challenge that has threatened to derail Bitcoin from its original vision. Its popularity is such that it is touted as a better alternative to other payment means.

Furthermore, its development and success have also given rise to greater adoption of Layer-2 scaling solutions for layer-1 blockchains. Through various strategies, the issue of the Blockchain trilemma, which poses a challenge to the blockchain ecosystem, can be resolved quickly.

Do you think the Lightning Network can put the Bitcoin blockchain on par with other payment processing platforms like VISA? Let us know your thoughts in the comments below.