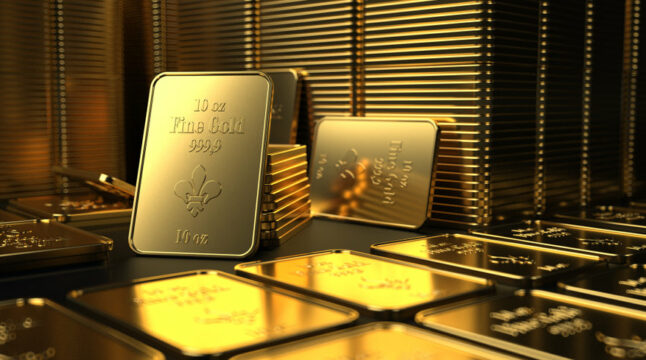 When stocks and bonds are volatile and geopolitical tensions remain high, gold would usually outperform. So, what's holding gold back right now?

With all that’s been going on in the world and the widely held view that these events support a steadily increasing gold price, some gold bugs may be wondering why the price isn’t higher already. In fact, the price has pulled back in recent weeks, diving back below the all-important psychological level of $1,900 an ounce after briefly approaching $1,980 an ounce.

It’s no secret that stocks have been swinging wildly, so it would be natural to expect gold to do well. Stocks have also been hammered by the war in Ukraine, the economic slowdown in some parts of the world, and soaring inflation. As a result, one would think that gold would be the ideal asset.

However, the precious metal has been nearly as volatile as stock, jumping up one day and then falling the next. David Jones of trading platform Capital.com said that this past week, gold briefly traded to its worst levels since mid-February.

“But there appears to be a hard core of gold traders who seem happy to buy the dip, given the prospect of ongoing geopolitical uncertainty and the continuing inflationary backdrop,” he said in an email. “What has been holding gold back has been the ongoing strength in the U.S. dollar.”

Jones pointed out that the dollar index briefly hit a 20-year high this past week. He believes if traders start to think that the dollar has gone far enough for now, we might start to see at least some weakness. Jones thinks that if that happens, it could help gold recover from current levels.

What About the Fed?

A related factor that’s likely impacting the price of gold right now is the commentary from the Federal Reserve. Graham Smith of Fidelity told Kitco News recently that the precious metal has been negatively impacted by expectations that the Fed will act aggressively to rein in inflation. He pointed out that the possibility of additional interest rate hikes makes the dollar look more attractive than gold and other assets with no yield.

In its Gold Market Commentary for April, the World Gold Council said rates-related volatility has damaged asset performance. However, as of April, gold remained one of the best-performing assets in 2022. The organization said the very strong U.S. dollar, at its highest level in 19 years, hawkish central bank commentary leading to higher rates and volatility, and negative momentum drove the pullback in the gold price.

The World Gold Council added that it had been almost 20 years since the dollar index has remained above 100 for more than a few months. It also said the trade-weighted nominal U.S. dollar index is close to record highs, just a bit short of the brief period during the early stages of the pandemic when it surged higher.

Where is Gold Taking Direction From?

Not everyone is convinced that the dollar and the Fed are to blame for the gold price’s lackluster performance. Although it cited the dollar’s strength as a key barrier to gold’s performance, the World Gold Council said the negative correlation between the dollar and gold has weakened recently.

Additionally, analyst Ole Hansen of Saxo Banks said in a recent note that gold is taking some of its “directional input” from crude oil rather than real yields. He believes that’s part of why the yellow metal’s price has been restrained.

Hansen explained that the rise and fall of the oil price impact inflation via diesel, gasoline, and other refined products. Additionally, its strength or weakness provides input on the level of geopolitical risks on the market now.

A “Satisfactory” Performance for Gold

As gold bugs continue to expect a sizable rally in the precious metal, Hansen of Saxo Bank calls its performance “satisfactory.” He pointed out that gold is up by only 2.6% in dollars, but it has provided double-digit returns for investors in other currencies.

For example, the gold price is up by more than 10% in euros and by about 16% in the yen. Hansen also pointed out that with stocks and bonds performing so dismally, gold’s relative performance showcases its importance for diversification in a challenging year.

He’s positive on the yellow metal due to the need to diversify from volatile stocks and bonds amid increasingly embedded inflation and the ongoing geopolitical concerns. Hansen has observed a pickup in sales from technical-driven traders searching for rising yields to drag the price lower. He believes gold needs to break back above $1,920 an ounce with support for that focus to change.

Why Investors Probably Won’t Give Up on Gold Anytime Soon

In another note, Hansen explained why he doesn’t think investors will give up on gold anytime soon. When comparing gold with real yields at around 0.12%, some might argue that gold is overvalued by about $200. However, he pointed out that gold demand, especially through exchange-traded funds, has remained robust as real yields have risen.

Hansen said asset managers, in particular, are buying gold to hedge against a potential policy mistake, like if the FOMC hikes until the economy breaks. He also called attention to Paul Tudor Jones’ recent interview with CNBC, in which he said the investing environment is worse than ever before as the Fed raises interest rates while financial conditions have already become increasingly tight. According to Jones, it’s clear that we don’t want to own bonds and stocks right now.

The World Gold Council also said that if the dollar remains strong, gold could start to see tailwinds instead of headwinds from it. On one hand, if hawkish central banks and rising yields drive a stronger dollar, it would be negative for gold.

However, on the other hand, if the dollar’s strength is driven by risk-off sentiment, it would probably be good for gold. The World Gold Council noted that if the war in Ukraine impacts the rest of the world more severely and broadly, both the dollar and gold could rise, a common occurrence in these types of environments.

Concerns About the Gold Price to Watch

Despite these bullish views, concerns for gold remain. Hansen pointed out that the U.S. dollar is sharply higher against the Indian rupee and the Chinese renminbi, the two biggest buyers of physical gold in the world. He added that this could trigger a challenging period for gold until the buyers adapt to the higher levels. If or when that happens, Hansen expects it to trigger some pent-up demand, particularly in India.

Another concern is Russia, as its central bank holds a significant percentage of its reserves in gold. The market is likely concerned that Russia will start to sell some of its gold to prop up its economy and fund President Vladimir Putin’s war.

Sanctions are preventing Russia from accessing the euros and dollars it holds at private institutions and central banks in the U.S. and Europe. However, the G7 plans to work together to keep Russia from deploying its international reserves to support its war effort.

According to Hansen, gold needs to break above $1,920 an ounce to force buying from recent short-sellers. He sees key support at $1,850 on the Comex gold future with further support toward $1,830. Hansen said that only a break below that level would challenge his bullish view on gold.

What do you think is holding the gold price back right now? Are you bullish or bearish on gold right now? Share your insight in the comments section below.