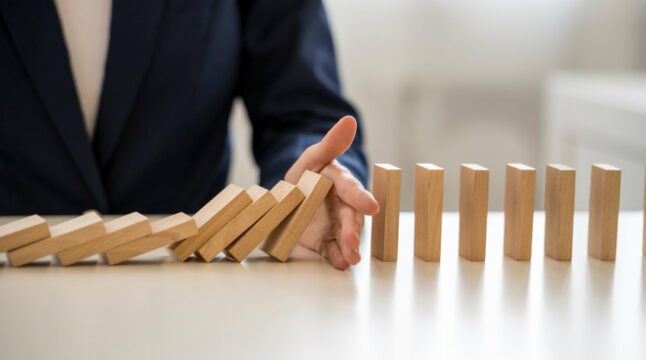 Evergrande is to sell a 50% stake in a management unit for over $5 billion while a domino cascade of the global economy looms.

Evergrande, China’s most indebted property developer, is slated to sell a majority stake in its property management unit to Hopson Development, a rival real estate firm. While the plans have not been made official yet, analysts warn the deal could have an impact on China’s economy.

Meanwhile, the economic outlook in other parts of the world is also not much favorable, leading to fears of a domino effect across the global economy.

Evergrande to Sell 51% Stake for $5 Billion

China Evergrande and Hopson Development, two of China’s housing giants, requested halts on trading shares in their companies this morning, citing “an announcement containing inside information about a major transaction.” Subsequently, Chinese media outlets reported that Evergrande is set to sell a 51% stake in the property unit to Hopson Development for over $5 billion.

Evergrande, once China’s top property developer, owes more than $300 billion in debt to lenders. Just last week, the property developer missed two unpaid offshore debt obligations, further implying that the company might be on the brink of bankruptcy.

Ostensibly, the new deal has stirred up concerns this might also infect Hopson and the broader economy if it collapses or is liquidated at rock-bottom prices. Ezien Hoo, an analyst at the Oversea-Chinese Banking Corporation (OCBC) said:

“Looks like the property management unit is the easiest to dispose in the grand scheme of things, indicative of the company trying to generate near term cash. I’m not sure this necessarily means that the company has given up on surviving, especially as selling an asset means they are still trying to raise cash to pay the bills.”

Hopson, which has a market value of around $8 billion, was rated B+ by Fitch after its shares gained 40% year-to-date. On the other hand, shares in Evergrande have plunged 80% so far this year, even prompting Fitch to downgrade its forecast for China’s economic growth.

Previously, Fitch Ratings had predicted China’s growth to come at 8.4%. However, the credit rating agency has downgraded its estimate to 8.1%, saying the “main factor weighing on the outlook is the slowdown in the property sector”.

It is worth noting that China is one of the world’s biggest creditors and, at the same time, one of the largest debtors. From 2015 to 2020, China’s external debt increased to $2.4 trillion, by 74%. During the same period, the country’s internal debt, as debt to GDP ratio, has increased by 270%.

If Evergrand collapses, it would become apparent that much of China’s capital has been misallocated. Therefore, the possibility that many of China’s other ventures end up like Evergrande increases — revealing possible systemic economic fraud.

US Debt Default Would Be “Catastrophic”

Aside from China, the economic outlook in other parts of the world also appears gloomy. In the US, Jamie Dimon, CEO of JPMorgan Chase, has warned that a US default would be potentially catastrophic.

US Treasury Secretary Janet Yellen announced last week that the Treasury would be unable to pay all of the government’s bills beyond October 18. She said:

“At that point, we expect Treasury would be left with very limited resources that would be depleted quickly. It is uncertain whether we could continue to meet all the nation’s commitments after that date.”

Now, as the October 18 date approaches, Democratic lawmakers and the Republican opposition have to either forge an agreement to raise the country’s borrowing limit or risk a default. In the case of a default, Dimon said it would be catastrophic, proposing:

“Every single time this comes up, it gets fixed, but we should never even get this close. I just think this whole thing is mistaken and one day we should just have a bipartisan bill and get rid of the debt ceiling. It’s all politics.”

Yellen has also warned on the ramifications of a default. She said the US “would likely face a financial crisis and economic recession” if the Treasury can’t repay bondholders as debts mature. “It is imperative that Congress swiftly addresses the debt limit. If it does not, America would default for the first time in history,” she added.

Gas and electricity prices are soaring in Europe, forcing officials to search for a resolution ahead of a grueling winter. As per a report by Reuters, front-month gas futures in Europe have increased by 6x on a year-over-year basis while regional storage sites are only 74.7% full, the lowest for more than a decade.

To address these issues, Paschal Donohoe TD, President of the Eurogroup, will chair a meeting of the Finance Ministers of the Eurozone in Luxembourg this afternoon. Reportedly, the meeting will be dominated by record prices for natural gas.

Nevertheless, some European countries are balking at the idea of slowing down the road to decarbonization by allowing the use of fossil fuel to temporarily alleviate the price surges.

Robert Kiyosaki, author of bestselling Rich Dad Poor Dad, predicts a “giant” market crash is coming in October. Looking at markets, do you think Kiyosaki is right? Let us know in the comments below.