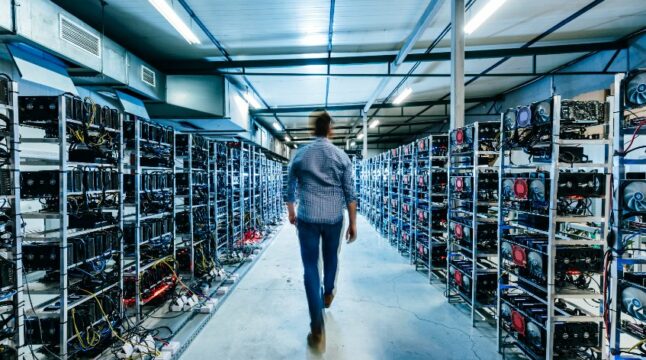 Is Ethereum too big to fail for the Merge leftovers to succeed?

Following the successful Merge, the old proof-of-work Ethereum still lives on. Thanks to Chandler Guo who instigated EthereumPoW (ETHW), there are enough miners to keep Ethereum going, which was itself a hard fork of Ethereum Classic (ETC).

Guo claims that EthereumPoW could eventually equalize with Ethereum, going up as much as 100x in 10 years. But is there any data to support such a forecast?

What Happened with the Merge and ETHW?

After dozens of upgrades and testnet runs over several years, the Bellatrix upgrade enabled the proof-of-work execution layer to communicate with the proof-of-stake consensus layer. When it was activated on September 6th, Beacon Chain validators could start generating Beacon Blocks, as the new PoS Ethereum.

The Merge itself happened on September 15th as the Paris upgrade, docking Ethereum’s historic state with the new PoS layer. Visually represented, the Merge looked like this.

One day before the Merge, ETH price was hovering around ~$1,640, having dropped -20% since, to $1,296. In addition to losing -99.95% of its energy footprint by ditching miners, Ethereum’s staking efficiency drastically lowered ETH reward block issuance – its inflation. In other words, Ethereum 2.0 now has a lower inflation rate than Bitcoin, at +0.20% vs. +1.72% respectively.

As Beacon Chain became Ethereum’s new home, it is secured by over 432k validators, with 11.54% of its total ETH supply staked, worth ~$18.9 billion. Tellingly, this holds more value than the next largest Ethereum competitor – Cardano – has in total market capitalization. ETH staking rewards hover around ~4.1% annual percentage rate (APR).

However, because staked ETH is effectively securing the network, its withdrawal is yet to be enabled via the Shanghai upgrade. In the meantime, there are still 18.6% of Ethereum nodes in the process of syncing, out of a total of 8469.

In early August, Chandler Guo announced EthereumPoW in a longish manifesto, which even quoted iconic philosopher Friedrich Nietzsche. Guo accused the Ethereum Foundation of abandoning the spirit of decentralization. He further disapproved of the decision to enable the EIP-1559 base fee burning mechanic, which “was an attempt to create a bullish narrative at the expense of the miners.”

Guo compared token burning with the government imposing taxes to lower inflation. Of course, that’s because ETH miners were hit by it. Lastly, Guo noted that EthereumPoW’s goal is to be 100% autonomous and self-sustained within three years. How feasible is that goal?

After the Merge, at least $5 billion worth of ETH mining equipment was rendered obsolete. Moreover, just a day after the Merge, Guo told Yahoo Finance that 90% of miners will go bankrupt. The problem is, only miners with cheap electricity, at around $0.10 kW/h could be profitable, in addition to having the latest GPU hardware like the GeForce RTX 3090.

When it comes to user activity, during the last 24h, ETHW trading volume accounted for 0.4% of ETH volume during the same period. This is not surprising given Ethereum’s hundreds of dApps and multiple highly-trafficked layer 2 networks – Polygon, Arbitrum, and Optimism. In contrast, EthereumPow has fewer than 10 dApps available.

What About ETHW Upsides?

Based on data represented so far, it doesn’t take much to conclude that EthereumPoW is heading for an uphill battle, unlikely to succeed in leveling up with Ethereum in 10 years. When it all comes down to it, Ethereum has the largest number of developers involved, the first mover advantage, and the richest dApp ecosystem.

In addition to raw brain power, there is little evidence to suggest that people tend to bet on weak horses. This is particularly relevant in the blockchain space, with so many other dApp PoS alternatives to Ethereum itself – Avalanche, Solana, Cardano, Algorand, Cosmos, and Tron. And more are incoming. With that said, SEC Chair Gary Gensler did hint that post-Merge Ethereum could be considered a security.

Furthermore, a recent SEC lawsuit against Ian Balina revealed that the SEC is trying to take over jurisdiction over all Ethereum transactions, based on US-based node concentration (45%). Without legislative intervention, it is feasible for the SEC to start treating Ethereum like a US securities exchange.

On the other hand, by ditching miners, Ethereum lost its eco-based baggage. Institutional investors are more likely to invest in PoS blockchains due to the ESG framework imposed by Blackrock. In the end, EthereumPoW miners will have few roads to tread, now that the entire world is under a severe energy crunch.

Do you think it is valuable to have EthereumPoW running as a potentially more decentralized backup? Let us know in the comments below.