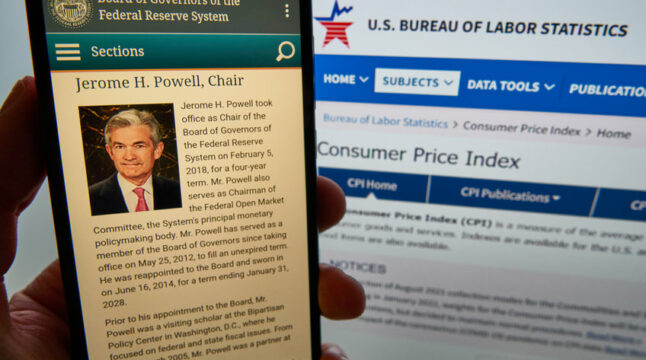 The consumer price index, an inflation measure that examines the weighted average of prices across dozens of items, spiked 7% in December from a year earlier, reaching the highest level in 40 years. The news had a positive impact on Bitcoin and the broader crypto market, with the flagship cryptocurrency even testing the $44,000 resistance level.

According to a report released by the US Bureau of Labor Statistics, the United State’s cost of living index climbed to a 40-year high, rising by as much as 7% over the past year before seasonal adjustments. Prior to this, the index had risen by 6.8% in November.

Reportedly, economists were expecting the index to rise 7% on an annual basis but predicted that it would increase 0.4% from November. However, beating the latter expectation, CPI rose 0.5% on a monthly basis. The annual move was the fastest in the last 40 years, and is exacerbated by a shortage of workers, supply chain bottlenecks, and of course the unprecedented cash injection by the Federal Reserve.

“This morning’s CPI read really only solidifies what we already know: Consumer wallets are feeling pricing pressures and in turn the Fed has signaled a more hawkish approach. But the question remains if the Fed will pick up the pace given inflation is seemingly here to stay, at least in the medium-term. With Covid cases continuing to rise, the impact on the supply chain and labor shortages could persist, which only fuels higher prices.”

The so-called core CPI, which is obtained from excluding food and energy prices, increased 5.5% year over year and 0.6% month over month. This beat analysts’ estimates of 5.4% and 0.5%, respectively. Since food and energy have volatile prices even in non-pandemic times, core CPI is deemed more important.

Meanwhile, during his re-nomination testimony in front of the Senate Banking Committee on Tuesday, Federal Reserve Chair Jerome Powell passed a considerable amount of time discussing the subject of inflation. He said inflation continues to remain well above the Fed’s target, which “is telling us that the economy no longer needs or wants the very highly accommodative policies that we’ve had in place.”

However, he noted that the central bank has no intentions of significantly rising interest rates in the near future. He said:

“We have been and probably remain in an era of very low interest rates.”

Bitcoin, which dipped below $40,000 earlier this week, managed to pass the $44,000 mark for a brief moment following the red-hot inflation report. At the time of writing, Bitcoin is consolidating around $43,700, up by more than 2.3% over the past 24 hours, according to CoinMarketCap. The majority of other crypto assets are also in green, up by at least 2% over the past 24 hours.

As previously reported, Bitcoin open interest, or the volume of open contracts in futures, are currently near all-time highs despite Bitcoin’s recent poor price performance. This suggests that the majority of market participants are shorting BTC. Therefore, some analysts have projected that an uptick in price would trigger stop-losses and result in a short squeeze.

Do you think the Fed will be able to reduce inflation to its target of around 2% by the end of 2022? Let us know in the comments below.