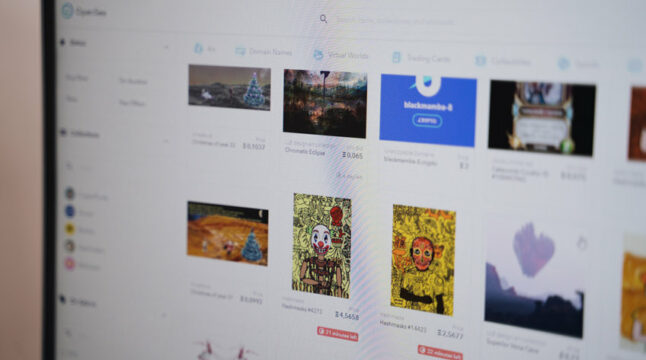 With OpenSea’s $13B Valuation, How Does NFT Growth Compare to Early FinTech?

OpenSea's valuation has increased by 900% over the last six months.

Leading NFT marketplace OpenSea has garnered a valuation of $13.3 billion with its recently announced Series C $300 million funding round. The valuation marks considerable growth, as the platform was launched just four years ago in December 2017. How does such significant NFT growth compare to that of the early FinTech industry?

Details of OpenSea’s Latest Fundraising Round

OpenSea has raised $300 million in Series C fundraising round at a $13.3 billion post-money valuation. Previously, the platform had raised $100 million in an investment round led by Andreessen Horowitz (a16z) in July 2021, at a valuation of $1.5 billion. It has therefore increased its valuation by more than 9x over the course of six months.

The company detailed that it aims to use the new funding to accelerate product development, improve customer support, invest in other NFT and Web3 communities, and grow its team. The need for further expansion comes as OpenSea continues to remain the dominant shareholder in the booming NFT sector.

As The Tokenist reported in mid-November, OpenSea accounts for over 97% of the NFT market share, which is notable considering how large the NFT space has become. According to The Block Research, the trading volume of NFTs surpassed the $13 billion mark in 2021, rising by a massive 42,988% compared to 2020.

This growth can be further represented by some of the most expensive digital arts, which were sold for millions of dollars. On top of the list stands Beeple’s The First 5000 Days, which was auctioned for $69.3 million in March and positioned Beeple “among the top three most valuable living artists.” Human One, another NFT by Beeple, was sold for around $30 million in late 2021.

How does such significant early NFT industry growth compare the early growth we saw in FinTech? A look at the history of PayPal will provide an indication.

OpenSea, founded in December of 2017, started with the simple idea of creating a marketplace for trading NFTs, particularly CryptoKitties, one of the very first NFT projects launched in the form of ERC-721 tokens. Notably, the platform maintained a small team for the first few years, which describes how it survived the years-long bear market that started shortly after it launched.

In early August 2021, OpenSea managed to exceed $1 billion in gross market volume year-to-date (YTD) for the first time. By late 2021, it had grown so much that it processed $3.2 billion in volume in the month of December alone. Meanwhile, data shows that OpenSea currently has around 1.75 million users.

On the other hand, PayPal, founded in 1998, started on the premise of a low-cost and effortless digital payments system. Targeting an underserved market, the company soon became an e-commerce giant, handling more than $3 billion in payments from 2.6 million commercial consumers and over 10 million individuals within the first three years of its launch.

PayPal went public in February 2002 with a price of $13 per share, gaining a valuation of $800 million. The IPO was considered a huge success as PayPal’s stock price shot up nearly 55 percent on the Nasdaq on its first day of trading. Later in July 2002, eBay acquired PayPal in a deal valued at $1.5 billion.

The electric payment company continued its growth, surpassing 100 million end-user accounts by February 2006. By September 2011, PayPal was reportedly processing over 5 million transactions, worth more than $315 million, per day. Interestingly, OpenSea’s daily volume reached north of $320 million at its peak in late August.

Considering that both PayPal and OpenSea serve very different needs and emerged at completely different times with differing technological environments, the comparison might not seem fair. Both platforms However, both of these platforms do have one thing in common: they were both innovations and both marked the start of a new era.

Do you think OpenSea will be able to remain the dominant shareholder of the NFT market? Let us know in the comments below.