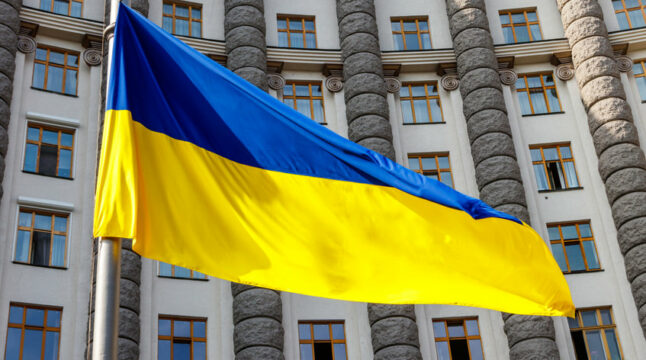 The WORLD Airdrop is likely misleading and has no connection to the Ukrainian government.

Update (6:48am EST): Ukraine’s Vice Prime Minister and Minister of Digital Transformation of Ukraine has announced Ukraine’s cancellation of an airdrop. (10:30am EST): More context added to the story by Ruholamin Haqshanas.

Mykhailo Fedorov, Ukraine’s vice prime minister and minister of digital transformation, has affirmed that they are not proceeding with the planned airdrop. The announcement comes right after an airdrop that appeared to be from the Ukraine government made waves across the crypto space.

Blockchain addresses show that certain users who have donated to Ukraine have received airdrop of Peaceful World (WORLD) tokens. While some initially speculated that this could be Ukraine’s secret airdrop token, crypto users were fast to reveal holes in the scheme — even before the announcement by Fedorov.

Fedorov took it to Twitter on Thursday to announce the change in plans regarding the country’s much-anticipated airdrop. He said:

“After careful consideration we decided to cancel airdrop. Every day there are more and more people willing to help Ukraine to fight back the agression. Instead, we will announce NFTs to support Ukrainian Armed Forces soon. We DO NOT HAVE any plans to issue any fungible tokens.”

The announcement comes right after what seemed to be an airdrop from the Ukraine government started to make headlines. The airdrop in question has distributed tokens to some crypto donors.

As per data by Ethereum blockchain explorer Etherscan, on Wednesday, 7 billion Peaceful World (WORLD) tokens were produced and sent to Ukraine’s official crypto donation address. Subsequently, it appeared that the official wallet sent around 1 million WORLD tokens to a wallet that used the tokens to seed a liquidity pool on decentralized exchange (DEX) Uniswap.

Earlier on Wednesday, Ukraine’s official Twitter account tweeted “airdrop confirmed” and pledged to “reward” those who are making contributions in the form of cryptocurrencies. “Snapshot will be taken tomorrow, on March 3rd, at 6 pm Kyiv time (UTC/GMT +2 hours),” it said.

All of this convinced some that the country is secretly testing and preparing for its big airdrop. However, crypto experts were fast to find holes in the scheme, revealing that this could be a scam.

Thomas Bertani, a blockchain expert, pointed out several inconsistencies. For one, he noted that the official airdrop was planned for 6 p.m. Kyiv time. Bertani also added that there was no signature ever coming from the Ukrainian address, saying:

“This contract has been specifically crafted to look like an airdrop being sent to donators from the “Ukraine Crypto Donation” address (0x165CD..), but it is a fake token & in fact it has nothing to do with 0x165CD even if from a superficial look it may look otherwise.”

“Avast security experts have detected scammers pretending to be Ukrainian nationals affected by the current conflict asking for Bitcoin on social media.”

Do you support Ukraine’s decision of dropping airdrop plans? Let us know in the comments below.