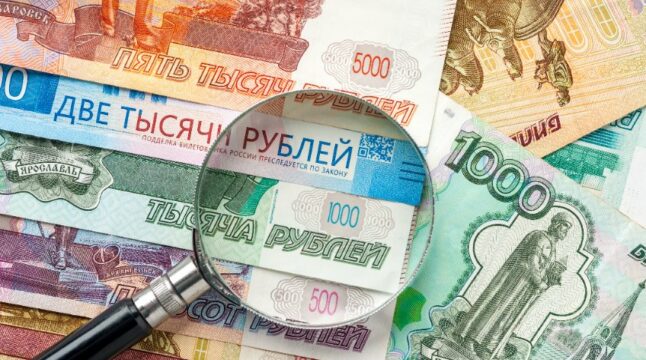 The Ruble keeps gaining against the USD as Russia's economy shrinks. What is really happening?

In normal circumstances, a stronger currency is supposed to be a good sign, but recent developments in Russia’s economy have proved otherwise. The ruble was on a spree this week and reached a 7-year high; according to Dow Jones Market Data Analysis of 56 currencies, this rally has seen the currency emerge as the second-best performer.

However, Russia’s economy has struggled to maintain balance in the face of sanctions inflicted as punishment for the invasion of Ukraine. Due to the unprecedented nature of the sanctions, Russia had to impose capital controls over its economy in order to artificially prop up its currency. The country’s unique condition with foreign trade creates a situation where the more valuable Ruble becomes, the more they lose on real income.

Russia Prevented the Ruble from Collapsing

One of Moscow’s earliest strategies to prop up the Ruble was forcing its energy buyers to only pay in rubles. This effort was rewarded with an almost 120% rally for the local currency. The Russian Central Bank also restricted access to foreign currencies for citizens. They also had to double the interest rate from 10% to incentivize people to hold the currency.

Although the measures to prop up the ruble averted a foreign exchange crisis, they gave room for a new problem.

Since the Central Bank cannot undercut export revenues locally, exported products have become more expensive, meaning Russia will be getting fewer Rubles when they convert their energy sales from USD. If the value of the Ruble keeps rising, the country will be making less real income. In an ideal world, they could leverage their strong currency to avail cheaper imports but in Russia’s situation, sanctions have closed the door for any imports already.

This peculiar situation has forced Russia to seek easing measures in what seems to be a desperate financial experiment and artificially control the Ruble which has been floated since 2014.

In subsequent months the country’s apex bank combined these measures to further decelerate the rally. The Kremlin government also required exporters to convert 80% of their foreign currency revenues into their local currency. On Tuesday, President Vladimir Putin signed a decree reducing this number to 50%.

Despite all the Central Bank’s efforts, the ruble has continued to hit new highs. However, the pace has slowed down considerably since the beginning of June. Usually, the performance of any currency and the economic conditions of any country move in tandem. However, Russia’s case has proved to be unique. Head foreign exchange strategy at Rabobank, Jane Foley, expressed her surprise at the turn of events.

“I wouldn’t have anticipated this, but when you put in the capital controls, you’re not looking at something real,” she said.

A Stronger Ruble is Bad For Russia

Reports have shown that inflation has continued to take its toll on Russians despite the ruble’s dominance. Statista reveals that the cost of living has risen to almost 20%, its highest point in over two decades. In 2021 the average inflation rate stood at about 6.69%. Since then, prices of goods and services ranging from groceries to rent have increased significantly.

In early March, weekly figures rose by 2.22%, shortly after the Russia-Ukraine conflict began. However, these figures seem to have slowed down to 17.51 as of May 20 from 17.83% the previous month. Although Russian workers’ wages are struggling to keep pace, the Central Bank projects that inflation rates should be down to 4% by 2024.

Tradingview’s six-month chart shows that the ruble has rebounded significantly from its previous lows following Russia’s attack on Ukraine. After falling over to 120 points against the greenback, the Kremlin currency quickly returned to 75 points shortly after its government fought back. It currently sits at the 54.5 mark. At the time of writing, the ruble has risen by 150% from its lowest point, with over 20% of this growth in 2022 alone.

Do you think Russia will be able to continue artificially controlling the Ruble without hurting its economy? Let us know your thoughts in the comments below.