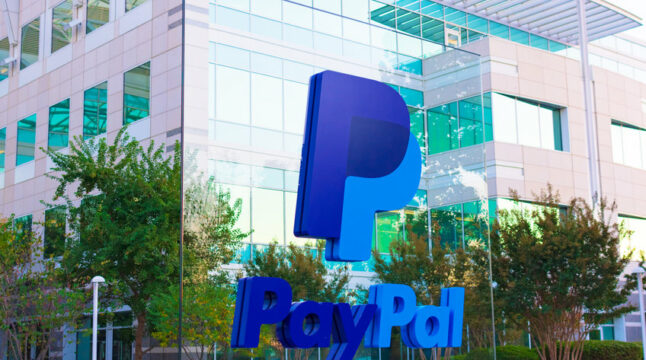 PayPal Down by 46% YTD, Returns to its Pre-Pandemic Level

PYPL is down ~46% year-to-date, as news of interest rate hikes continue to spook the markets.

With the Federal Reserve’s announcement of multiple interest rate hikes to follow this year, the stock market went into taper tantrum mode. While last month saw the S&P 500 index fall by 5.6%, PayPal stock suffered a precipitous collapse on February 1, by 40%.

PayPal Down By 40% Over Last Three Months

PayPal’s wipeout was similar to Meta’s record-breaking loss of $251 billion on February 3. However, because of PayPal’s smaller market cap, its stock drop represents “only” two years’ worth of earnings, at around -$50 billion in terms of market cap. In the immediate aftermath, PayPal’s executives and other insiders went in to “buy the dip”, acquiring $2.5 million worth of PayPal shares.

Although the purchase helped, as represented by the green candlestick on February 2, the falling cascade continued to the present day. Overall, PayPal is down 49% over the last three months.

The question is, why would the largest payment processing platform stumble so steeply, and what does it mean for the market at large?

It is usually argued that the stock market has relied on the Fed for years to suppress interest rates near zero. As a result, it was cheap to borrow money, the bread and butter for publicly traded companies to enact expansion investments. With that about to change, the first reaction for investors is to start selling while the price is still high.

The entire market resonates this sentiment recently, including Bitcoin going down by -33% in the last three months, which also pulled down the rest of altcoins with it.

However, in the case of PayPal, there is also the fundamental matter of weak revenue growth forecast.

While PayPal currently holds 426 million users, just prior to the wipeout it reported closing down 4.5 – 4.8 million accounts. Effectively, these were non-purpose accounts abusing PayPal’s rewards and incentives programs. A serious blow to the company’s credibility, these closures mean that PayPal’s previous forecast of getting to the 750 million user milestone in a few years is out the window, casting doubts over the company’s long-term plans.

John Rainey, PayPal’s Chief Financial Officer, reported both a decrease in seasonally adjusted retail sales and consumer spending. Both of which can be attributed to the highest inflation rate in the last 40 years, which is not accompanied by a corresponding rise in wages.

With that said, PayPal’s situation is not unusual for large platforms to find themselves in. When a certain threshold is reached, user count growth significantly slows down. Case in point, Netflix subscriber count slowed by 85% in Q2 2021 compared to Q2 2020. Likewise, even the much larger Meta (Facebook) with about 2.91 billion users in Q4 2021, is starting to report the shrinking of its user base for the first time since it launched 17 years ago.

In the case of Meta, it has to deal with a record-low 5% trust level in addition to aging users, while the young ones lose interest in the platform. For PayPal, the solution lies in maximizing the monetization of its existing user base. Given that 87.5% of online merchants have used PayPal, it is safe to say that the platform has no issue with brand recognition.

Then, there are PayPal’s acquisitions to make its customer reach more flexible. While Venmo mobile payment app caters to a young demographic, with 83% under 34, it also has Braintree, Xoom, iZettle, and Honey. Altogether, they make it exceedingly easy for online merchants to integrate payment gateways and aggregate discounts and coupons.

Nonetheless, PayPal lost its shine as a growth company, one that is expected to outperform the market. It is now transitioning into a value company, with its shares slightly lower than the fundamentals suggest.

As such, a long-term investment view is needed. After all, PayPal’s $5.4 billion free cash flow in 2021 is still impressive considering that many payment processing platforms are yet to enter profitability territory.

Are Stocks Cheaper Now than Pre-Lockdowns?

Lower buying power thanks to inflation, combined with the Fed pulling the plug this year on cheap money, is bound to make certain stock shares return to their pre-lockdown/money-pump setting. Primarily, this severely affects non-essential stocks:

As demonstrated, over the last six months, all of these industry representatives have been struggling. Like Meta and PayPal, Netflix also reached a user count threshold with steadily waning returns.

Lastly, it must be taken into account that the Covid-19 effect was priced in such stocks. Meaning, people speculated on which stocks benefit the most from various social distancing and isolation measures. Likewise, they might further speculate that certain habits are now entrenched, but inflation is gobbling up disposable income to make them count.

Do you see Paypal recovering in the long term? Let us know in the comments below.