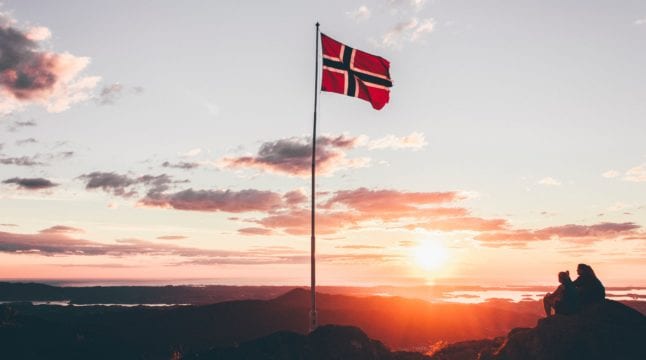 For the past year, we have become used to multi-billion dollar companies buying up Bitcoin. However, there were not that many old-school industrial conglomerates taking the blockchain leap, until now. Norwegian Aker ASA sees Bitcoin as an important part of doing business.

Norway has been built into a prosperous nation as we know it today because its people have leveraged Norway’s primary advantage – vast oil reserves. Apace with oil exports, ranked 15th in the world at about 2 million barrels per day, Norway is even more ahead in natural gas exports, positioned as 8th globally.

Taking care not to squander this steady accumulation of wealth, Norway had the foresight to established a sovereign wealth fund in 1990. Titled Government Pension Fund Global, or commonly nicknamed the oil fund, it currently holds over $1 trillion for use by future generations.

In building that wealth, Aker ASA has been an instrumental cog. Founded in 1841, this holding company is the umbrella under which Norwegians’ ingenuity has been harnessed, building up to become the key tool to unlock Norway’s locked energy potential in oil, gas, and renewables. Now, it has set its eyes on Bitcoin.

Just like Alphabet holds Google and other companies, Aker ASA holds over a dozen Norwegian companies involved with offshore drilling, shipping, oil production and engineering. This is why such companies are called holdings or conglomerates, with Aker ASA finishing Q4 2020 at $6.2 billion in revenue. This represents an increase of 75% from Q3.

On the back of this growth, and the company’s realignment with renewable energy and digital technology, Aker ASA established a new company called Seetee. Its sole purpose is to serve as an investment vehicle for all blockchain-related projects. As a part of its launch, it had been capitalized with 1170 BTC, worth about $58.4 million.

Seetee will use these funds to integrate Bitcoin into Aker ASA holdings’ ecosystem, Bitcoin mining, blockchain projects and for future Bitcoin purchases. To materialize those projects, the new company will partner with Blockstream. As the leader in implementing enterprise-grade blockchain solutions, Blockstream took the public spotlight with its Lightning Network and sidechains (Liquid Network).

Built on top of Bitcoin’s blockchain, Lightning Network represents the possible future of blockchain. Instead of creating a new one, Blockstream uses a second layer to drastically accelerate the performance of the blockchain for instant, high-volume payments.

Aker Management Views Bitcoin as an On-Ramp for Digital Economy

As you may have noticed, Bitcoin’s growing popularity and adoption continue to generate electricity consumption concerns. The Tokenist noted that it doesn’t quite make sense to quantify Bitcoin’s verification and mining network without comparing it to all the waste created by the existing system – debt-based economy and the banking infrastructure. Nevertheless, this will keep many people up at night.

Taking a stance against such sentiment, the chairman of Aker, Kjell Inge Røkke (net worth of $5.5 billion), doesn’t view Bitcoin’s perceived drawbacks as something that will cripple its future demand:

“I want to state up­front that I am aware that Bitcoin is often criticized for a number of perceived challenges, including its electricity consumption, its inability to scale with respect to transactions, and its potential to facilitate anonymous illegitimate payments. We believe that Bitcoin can be a solution rather than a problem for each of those.“

Citing in-depth research into the subject, and influence by dozens of cryptocurrency insiders, from Andreas Antonopolous to Michael Saylor, Røkke seems to be betting on Bitcoin as an on-ramp for the entire tokenized economy. Let’s further explain what that entails.

The Exaggerated Allure of Altcoins

One of the most persistent worries surrounding Bitcoin is that it may be supplanted by other cryptocurrencies because they offer better technology. Let’s take privacy coins as an example. Seemingly, Monero (XMR) presents a better value proposition than Bitcoin because it is truly crypto, while Bitcoin’s transactions can be tracked.

In other words, some would say that Monero represents cryptocurrency as originally envisioned, and people simply haven’t caught on yet. However, such arguments omit an important fact. Exchanges can quickly delist privacy coins under government pressure. For instance, Bittrex had already delisted three major privacy coins – Monero (XMR), Zcash (ZEC) and Dash (DASH).

One could say that atomic swaps are the solution for such deplatforming. Nonetheless, the fact remains that an extra feature – privacy – introduces major friction. In turn, Bitcoin’s lack of privacy can be amended with smart-contract-powered solutions like Tornado.cash – implementing privacy on public blockchains.

As for Bitcoin’s scalability and transaction speed, this is where Aker’s partnership with Blockstream comes in.

Why Institutional Investors Bet on Bitcoin

Lightning Network adds a 2nd layer onto a solid foundation – as a secure and simple Bitcoin blockchain – instead of reinventing blockchain from scratch. More importantly, as social media networks demonstrate, the importance of the network effect cannot be understated. Bitcoin gained primacy as the first cryptocurrency, achieving momentum like no other token.

While minor tokens have their role to play, the economic incentive will keep attracting top blockchain developers to build upon Bitcoin’s unassailable foundation. The same one that requires electricity expenditure to keep it safe. Adding layers will make its transactions faster, in addition to customizable privacy.

In the meantime, an effort should be expended into quantifying the energy expenditure of multiple layers within traditional centralized finance. No doubt, each one would yield a country’s worth of energy consumption.

Do you hold altcoins because of their utility or for their potential to grow in price as a speculation asset? Let us know in the comments below.