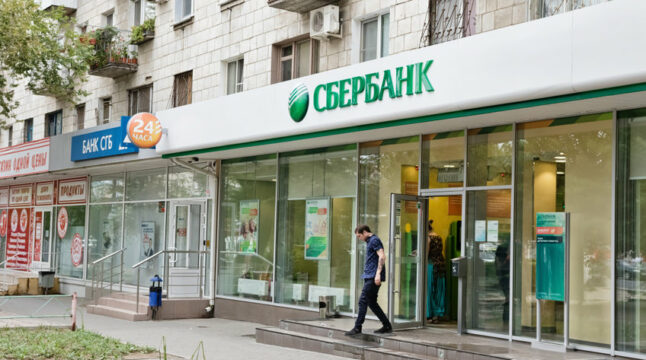 After Russian President Vladimir Putin launched a “full-scale military invasion” of Ukraine, the Russian 10Y Government Bond’s yield soared to ~12.69% at the time of writing, the highest since January of 2016. The 10-year bond is an important indicator of investor confidence, implying that the investor sentiment about the Russian economy is dire given the recent news.

Sanctions Prevent Sale of Russian Bonds on Secondary US Markets

As fears of a Russian attack on Ukraine were mounting earlier this week, the US and EU announced sanctions that prohibited the trading of new Russian bonds—a move that was meant to raise Moscow’s borrowing costs and push western investors out of the country’s debt market entirely.

According to Kaan Nazli, a portfolio manager at Neuberger Berman, this curb closed a loophole that somehow allowed western lenders to indirectly finance the Russian state. “It brings more teeth to earlier sanctions,” said Nazli, adding that earlier investors had the option to buy bonds from a local Russian bank that had purchased the bonds in the primary market.

In another move, the US Treasury imposed sanctions on the Corporation Bank for Development and Foreign Economic Affairs Vnesheconombank (VEB) and Promsvyazbank Public Joint Stock Company (PSB), two major Russian state-owned financial institutions, along with 42 of their subsidiaries on Tuesday.

In a statement, the US Treasury claimed that VEB is essential to Russia’s ability to raise funds, while PSB is critical to Russia’s defense sector. The sanctions were imposed after President Vladimir Putin decided to recognize the so-called Donetsk and Luhansk People’s Republics (DNR and LNR) as “independent” states.

Other countries, including the UK, Germany, Australia, Canada, and Japan have either imposed sanctions or announced plans to target Russian banks. For one, the UK announced Tuesday sanctions against five Russian banks and three Russian billionaires. Further, Germany announced the halting of the process of certifying the Nord Stream 2 gas pipeline from Russia.

The Ruble’s Purchasing Power at All Time Low to USD

Following the recent “military operation” on Ukraine, harsher sanctions are expected to be imposed by the West. Arguably, this has made investors skeptical of the local currency, the ruble. On Thursday, the ruble dropped almost 10% to hit an all-time low. At its lowest level, the ruble passed 90 per US Dollar, before trimming some losses to change hands at around 84.

Meanwhile, Russian assets were also heavily hit on Thursday. As investors started preparing for the toughest round of Western sanctions, stocks collapsed as much as 45%. Moreover, as much as $259 billion was wiped out of the stock-market value.

Possible Implications of the Russian Invasion of Ukraine on Global Economy

According to a 2021 report by BP, Russia is the third-largest oil producer in the world. Therefore, the impending sanctions on Russia would send the already soaring energy prices to new levels, further exacerbating inflation.

However, aside from energy, Russia has a minor role in the global economy. Pointing this out, Jason Furman, a Harvard economist who was an adviser to President Barack Obama, said:

“Russia is incredibly unimportant in the global economy except for oil and gas. It’s basically a big gas station.”

Though it is worth noting that there are some countries dependent on this gas station (Russia). Russia reportedly exports nearly 40 percent of Europe’s natural gas and 25 percent of its oil. With natural gas reserves already at less than a third of capacity and many cold weeks ahead, rough times are waiting for Europe.

Furthermore, there will also be impacts on food prices. According to a report by S&P Global, Russia is the world’s largest supplier of wheat. Russia and Ukraine together produce 14% of global wheat and account for nearly a quarter of total global exports.

Do you think Russia will continue its push across Ukraine despite the escalating sanctions by western nations? Let us know in the comments below.