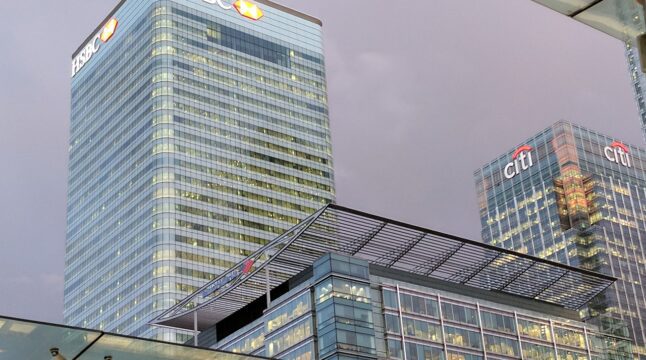 HSBC praised CBDCs as the new form of digital money that can spur economic growth. Are banks trying to hijack blockchain for their own gain?

HSBC, a UK multinational bank with roots in China, has acknowledged CBDCs as a new form of digital money that can be used to “spur economic growth”. In the report, the bank highlighted that CBDCs are stable and transparent, claiming they don’t pose any risks to consumers.

However, the bank also criticized cryptocurrencies and stablecoins, citing a lack of regulatory clarity as a major downside for the industry.

The bank also mentioned that CBDCs, with their near-instant payment settlement capability, could lower the expense of issuing and trading bonds and securities. Furthermore, govcoins can assist organizations with their fiscal and monetary policy objectives, as they facilitate direct transfers to consumers at an affordable cost.

However, as per HSBC, CBDCs first need to be “safe, efficient, and genuinely transformative” to be able to gain mainstream adoption. The bank also mentioned that CBDCs need to meet customer expectations for data privacy and protection while being able to mitigate financial crime risks.

Given their proposed structures, CBDCs could be a disaster for user privacy. Governments can use CBDCs and collect as much data about their citizens’ financial backgrounds as they desire. They will also have the ability to approve or deny transactions, freeze funds, and even make negative interest rates enforceable to everyone.

Nevertheless, HSBC declares that these problems can be tackled by choosing the right model used for CBDCs. The bank asserted:

“Like many other stakeholders, HSBC believes a hybrid model – sometimes called a two-tier model because the CBDC itself is a claim against the central bank but commercial banks provide the payment services and account management activity – is by far the best design option.

“This approach works because it avoids the need for central banks to set up new account management infrastructure, while ensuring commercial banks can continue to play their vital role lending to the economy.”

The bank noted that the lack of regulatory oversight by the government makes stablecoins and cryptocurrencies a poor medium of exchange.

HSBC added that only if cryptocurrencies achieve price stability and comply with anti-money laundering laws (AML), they may become useful as safe means of payment. It comes as no surprise that HSBC is skeptical of cryptocurrencies; with the bank’s CEO had previously saying Bitcoin “is not for us.”

In an interview with Reuters, Noel Quinn, chief executive at HSBC, said the bank has no plans to launch a digital assets trading desk or offer cryptocurrencies as an investment to users, citing volatility and a lack of transparency as reasons. Quinn said:

“Given the volatility we are not into Bitcoin as an asset class, if our clients want to be there then of course they are, but we are not promoting it as an asset class within our wealth management business. For similar reasons we’re not rushing into stablecoins.”

Nevertheless, even back then Quinn was a fan of CBDCs. “CBDCs can facilitate international transactions in e-wallets more simply, they take out friction costs and they are likely to operate in a transparent manner and have strong attributes of stored value,” he commented on govcoins.

HSBC has consistently favored CBDCs over cryptocurrencies citing financial crime risks. However, the bank itself has a history of laundering money and having a role in illicit activities.

Back in 2012, HSBC agreed to pay a $1.9 billion fine for serving as a middleman for Mexican drug cartels, and for being used as a means of laundering drug money flowing out of Mexico and other banking lapses. At the time, the bank was also charged with a lack of adequate control processes for compliance and AML.

“We accept responsibility for our past mistakes. We have said we are profoundly sorry for them, and we do so again. The HSBC of today is a fundamentally different organization from the one that made those mistakes.”

Given that HSBC confirmed its wrongdoing, it appears that the bank is too big to jail — as well as too big to fail.

As covered by The Tokenist, crypto companies have paid $2.5 billion in fines since 2009, while banks pay 4x that number in fines yearly. Despite this, banks, which are proven to be the dominant facilitators of money laundering, are now attempting to shift this perception onto crypto by underscoring how the field is unregulated.

Nevertheless, with HSBC and other banks endorsing CBDCs, it appears they are attempting to hijack the innovations made by crypto, with an aim to toss out the industry in the process.

Do you think CBDCs would get widespread adoption given their privacy issues? Let us know in the comments below.