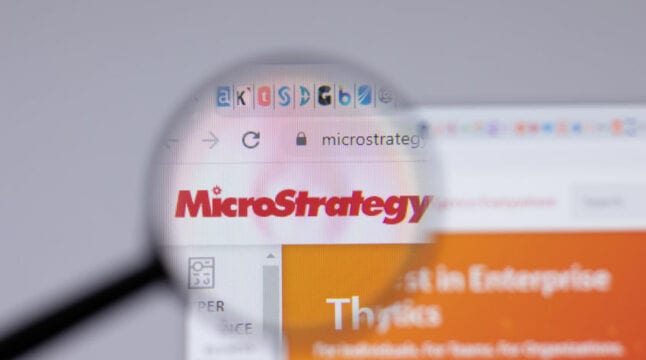 In August last year, Microstrategy raised eyebrows as the firm dabbled in Bitcoin by purchasing $250 million worth of the leading cryptocurrency. Though, it did not take long for the business intelligence software firm to start winning with Bitcoin. A look at the company’s stock price explains how.

Discerning this potentially promising asset, Microstrategy continued its Bitcoin buying spree and purchased more and more of the asset. In total, the company has invested more than $2.2 billion in Bitcoin. However, the firm has recently revealed its intentions to take advantage of the current dip and acquire more Bitcoin — even if it comes at the cost of borrowing money.

In such a situation, it would be pretty interesting to examine how each Bitcoin purchase affected the company’s stock price.

Microstrategy initially unveiled on August 11, 2020, that it has purchased $250 million worth of Bitcoin. A move that was generally interpreted, at that time, as a bet on the volatility of Bitcoin. Nevertheless, the company asserted that they have adopted Bitcoin to hedge against inflation.

Microstrategy said in a statement concerning the purchase:

“[I]nvesting in the cryptocurrency would provide not only a reasonable hedge against inflation, but also the prospect of earning a higher return than other investments.”

One day later, on Sep 15, CEO Michael Saylor revealed that his company had acquired an additional 16,796 Bitcoins at an aggregate price of $175 million. With this purchase, Microstrategy owned a total of 38,250 Bitcoins.

How Microstrategy’s stock price reacted to all these updates was pretty interesting. On Sep 14, the company’s stocks were trading at $142, on Sep 15 prices reached $155, and on Sep 16 to $174. In two days, the company witnessed a 22% rise in its stocks, which is pretty bullish.

On December 21, 2020, Microstrategy invested $650 million more into Bitcoin. As a result of this investment, the company’s total Bitcoin purchases overpassed $1 billion and its total number of Bitcoins reached 70,470.

“The Company continues to believe bitcoin will provide the opportunity for better returns and preserve the value of our capital over time compared to holding cash.”

On the day of this announcement, Dec 21, 2020, the company’s stocks were trading at $317, already up by more than 230% compared to when the firm initially dabbled in Bitcoin. However, Microstrategy’s stock started skyrocketing.

In less than two months from this last purchase, the company’s stock prices taped a record high of $1,272 — on Feb 9, 2021. Comparing to the time when Microstrategy first purchased Bitcoin, at this point, its stock has risen by around 1,000%.

Microstrategy Invests Another $1 Billion in Bitcoin

Following Tesla’s $1.5 billion Bitcoin acquisition on Feb 8, 2021, Microstrategy invested an additional $1 billion to purchase approximately 19,452 Bitcoins, on Feb 24, 2021. At this point, Michael Saylor had developed into an unconditional Bitcoin proponent.

He stated in the press release regarding this purchase:

“The Company remains focused on our two corporate strategies of growing our enterprise analytics software business and acquiring and holding bitcoin.”

Nevertheless, at this stage, Microstrategy’s stock price had already reached its peak of $1,272, and it was the turn for a natural correction. On Feb 24, Microstrategy shares were trading at around $817, and on the following days, the prices continued to decline until they found strong support at around $470.

Though, it can be argued that if it was not for Bitcoin, Microstrategy would not have witnessed this wild run — around 1,000% growth in less than 7 months. Currently, Microstrategy shares are trading at around $482, with a roughly 400% increase compared to 10 months ago when the firm first dabbled in Bitcoin.

MicroStrategy Asks for $400M, Receives $1.6B in Interest

According to a June 8 press release by the company, Microstrategy aims to sell $500 million of junk bonds to fund the purchase of more Bitcoin. The company initially intended to issue $400 million in a debut deal, but boosted the size of the junk bond sale as it received about $1.6 billion in interest for the offering.

Such a massive interest in a company that is focused more on Bitcoin than its core business is a little bit out of the norm. Though this can convey that countless institutions believe in Bitcoin, but for unknown reasons don’t directly invest in it. After all, an investment in Microstrategy is an indirect investment in Bitcoin — and everyone out there knows this.