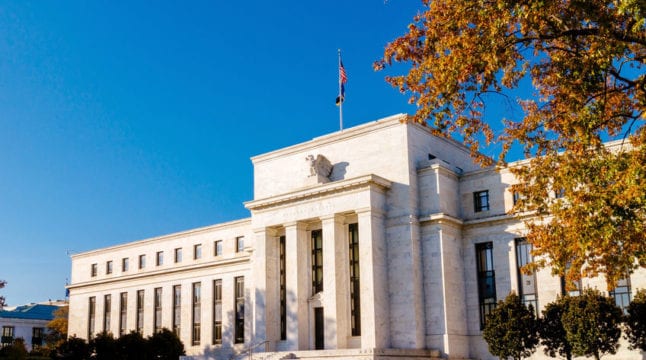 Fed Chair Powell: Bitcoin is “Essentially a Substitute for Gold”, Not USD

On Monday, March 22, during the virtual panel at the Bank for International Settlements (BIS) Innovation Summit,  Federal Reserve Chair, Jerome Powell noted that Bitcoin is more related to gold than to the dollar.

What Does Jerome Powell Think of Bitcoin?

During his responses to questions asked about whether he thought Bitcoin and other cryptocurrencies posed a threat to financial stability, the Chair delivered frank comments. He noted that Bitcoin was too volatile to be considered a major threat to the dollar. Chairman Powell said,

“Crypto-assets — we call them ‘crypto assets’ — they’re highly volatile — see Bitcoin — and therefore not really useful as a store of value, and they’re not backed by anything. They’re more of an asset for speculation, so they’re not particularly in use as a means of payment. It’s more a speculative asset. It’s essentially a substitute for gold rather than for the dollar.”

This is now a new criticism of Bitcoin. Many traditional financial experts have continued to heap the volatility talking points as a reason not to take Bitcoin seriously. Weeks ago, Treasury Secretary Janet Yellen made it clear  in critical remarks that she believes Bitcoin has primarily been used for illegal transactions. This caused a negative impact on the wider market.

In the past few weeks, BTC has been the subject of a lot of positive predictions. However, over the last few weeks, Bitcoin made a retractment from a new all-time high of around $62,000, only to make $60,000 its immovable obstacle. As of writing, the king cryptocurrency was trading at $55,116, a loss of 3.77% over the last 24 hours.

There have been opposing views on the extent of the volatility of the digital asset. Ari Wald, head of technical analysis at Oppenheimer, noted on Monday on CNBC’s “Trading Nation” that Bitcoin’s volatility is here to stay. He said on the show:

“You need to be able to stomach that volatility. It’s there to stay. With the upside, reward comes a lot of volatile day-to-day and even week-to-week action.”

In corroboration, Deutsche Bank published a report last Thursday highlighting that Bitcoin will remain “ultra-volatile.” The report mentioned that the limited supply of the pioneer cryptocurrency would continue to significantly affect the supply-demand equilibrium.  Currently, around 18.7 million or 89% of 21 million BTCs in total circulation have been mined. By 2140—which is roughly 120 years from now—all Bitcoins are expected to have been mined.

Illiquidity isn’t the only concern. Bitcoin volatility has been linked to comments disrupting the market. After Powell’s comment at the BIS, Bitcoin fell nearly 3% on Monday.  Earlier, Elon Musk Bitcoin evangelism on Twitter has caused a bullish rally for Bitcoin. When he added the hashtag #bitcoin to his Twitter bio, it helped to push the price of Bitcoin as much as 20% to $38,566.

The fear that a person’s comment may take the market in a downward spiral is visible. On the flip side, the price volatility of the Bitcoin is at its lowest.

According to data provided by Skew, the cryptocurrency’s implied volatility, or expectations for price turbulence, declined to an annualized 75% early Monday. This is based on calculations using options premium with a one-month horizon. Since the March 2020 bottom, Bitcoin has soared more than 840%.

Recently, SkyBridge Capital CEO, Anthony Scaramucci explained that Bitcoin is better than gold if investors take time to study it. The hedge fund manager made this known in an interview with CNBC on March 18. Scaramucci who is the CEO of SkyBridge Capital admitted that, although gold may have been the choice for a store of value for over 4,000 years, he believes that nothing is forever.

Mike McGlone, a senior commodity strategist at Bloomberg noted a similar trend. He tweeted on March 8 that Bitcoin was replacing the precious metal as a store of value in investors portfolios.

The chart above shows Bitcoin outperforming gold since mid-2020. During this period, the known holdings of gold ETFs reduced. This means that Bitcoin has continued to gain traction among institutional investors in comparison to gold.

Though Jerome Powell’s argument is that Bitcoin is closer to gold than the dollar, it’s an  argument that continues to eclipse itself as currencies continue to witness devaluations as inflation implodes.

Just yesterday, as the Turkish Lira fell after the country’s president, Tayyip Erdogan, unexpectedly fired Naci Agbal, the nation’s central banker, interest in Bitcoin spiked in Turkey. Citizens fear that the country’s currency might be heading into a crisis. According to Google Trends, searches for “Bitcoin” jumped by 556% as the lira plunged.

America’s economic policies have also been suspect. Due to the slowdown of economic activities caused by the COVID-19 pandemic, the Federal Reserve has resorted to printing money. While this pumping of money into the economy is a notable attempt at preventing an economic collapse, it is also good news for Bitcoin investors. Many have sought to adopt Bitcoin as a hedge against the possible ensuing inflation and continued devaluation of the US dollar.

It’s apparent that Bitcoin and the USD are closing in on each other with each trading day. What the Federal Reserve may begin to do is employ regulations to stall the overtaking of the digital asset.

This has been done by countries recently. A recent ban on Bitcoin mining is due to come into effect in inner Mongolia by April. Not long ago, Nigeria has also taken a similar route, banning financial institutions like banks and exchange platforms from dealing with cryptocurrency-related transactions. India also announced a proposed ban on trading, holding, and mining of the benchmark cryptocurrency. Egypt has also shadow-banned Bitcoin.

What we might continue to witness is that as more and more people adopt Bitcoin, the threat to the dollar becomes clearer. However, for now, there are still no strong indications that Bitcoin poses an existential threat to the USD—even in the eyes of the Federal Reserve.

Do you think Bitcoin will eventually pose a threat to the dollar—even according to regulators? Let us know in the comments below.