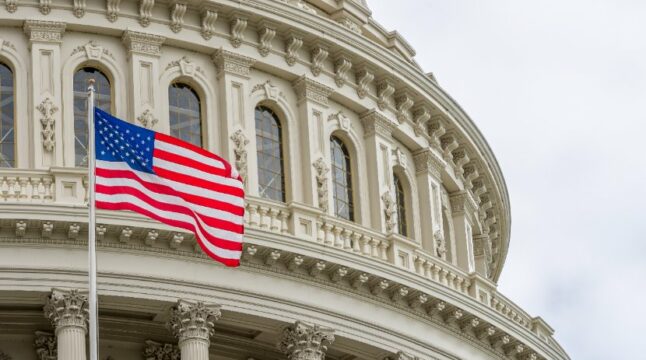 Senate Democrats have agreed on a revised version of the tax and climate bill after Senator Kyrsten Sinema backed the measure.

Democrats have reached an agreement over the tax and climate bill after making certain adjustments to the bill to win the support of holdout Senator Kyrsten Sinema. Sinema backed the bill after Democrats agreed to rule out a provision that would have narrowed a tax break for carried interest, changing a 15% minimum tax on corporations and including a new 1% excise tax on stock buybacks, according to Bloomberg.

Senate Democrats have come to terms with the tax and climate bill after Senator Kyrsten Sinema backed the revised version of the bill. Sinema refused to support the initial plan that included narrowing a tax break for carried interest and a 15% corporate minimum tax on major companies.

To win her vote, the remaining Democrats dropped the provision that would have narrowed the carried interest loophole and altered the 15% corporate minimum tax. Instead, the lawmakers agreed on a new 1% excise tax on stock buybacks.

“We have agreed to remove the carried interest tax provision, protect advanced manufacturing, and boost our clean energy economy in the Senate’s budget reconciliation legislation. Subject to the Parliamentarian’s review, I’ll move forward.”

Kyrsten said in an emailed statement.

The agreement marks an important milestone as it overcomes one of the last obstacles to legislation that supports President Joe Biden’s domestic agenda. Biden praised the deal, saying it represents “another critical step toward reducing inflation and the cost of living for America’s families” and urging the Senate to pass it quickly. Last month, a new CPI print showed that U.S. inflation hit a new 4-decade high.

However, the bill is yet to pass the parliament’s scrutiny which will determine whether some parts of the bill would abide by the chamber’s stringent budget rules. Parts of the bill that could create problems in terms of the budget include national content requirements for cars eligible for electric car tax credits, “caps on insulin out-of-pocket costs, and penalties for drug companies raising prices higher than inflation,” reports Bloomberg.

What Does the 1% Excise Tax Bring?

The new 1% excise tax linked to company stock buybacks would secure less than the previously estimated $124 billion. However, the stock buyback tax could still help compensate for the $13 billion loss that would emerge from extending the holding period for carried interest from three to five years and the roughly $100 billion loss that would come if lawmakers exempt tax credits for “depreciation and cost recovery from the minimum tax.”

On the other hand, the U.S. manufacturers were pushing for that exemption, arguing that the initial version of the bill would create investment obstacles and hurt competitiveness in the manufacturing market. Republican Senators stood united against the bill.

This week, another bill that would make the Commodity Futures Trading Commission (CFTC) one of the top crypto regulators has also been introduced in the U.S. Senate. The bill was put forward by Democrat Debbie Stabenow and Republican John Boozman, two key members of the Senate Agriculture Committee.

What do you think about the revised version of the bill? Let us know in the comments below.