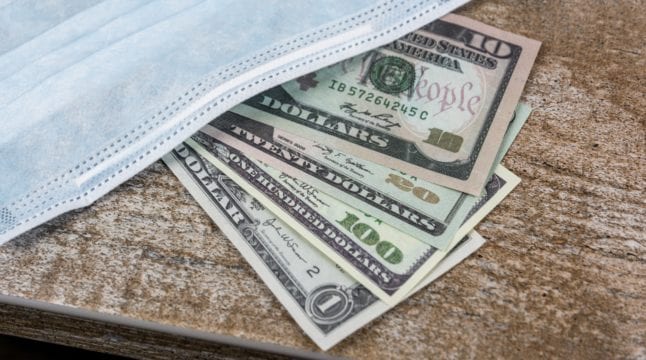 How Will the Coronavirus (COVID-19) Stimulus Package Impact the US Dollar?

As part of the package, most Americans will receive a one-time payment of $1,200. Hospitals will receive $100 billion in aid. $425 billion will fund loans for companies in distress. Another $75 billion will be allocated to industry-specific loans for those hit the hardest, such as the airline industry. The stimulus package is anticipated to calm, at least to some extent, financial markets.

Prior to the coronavirus, the US unemployment rate was a mere 3.5% — the lowest it has been in 50 years. But now, research suggests more than 35 million jobs are in jeopardy. A growing number of businesses continue to shut their doors each day. The Trump Administration has warned of unemployment rates reaching 20%.

In the face of such an uncertain future, the stimulus package has assured Americans across the country. Investors throughout the globe also expressed reassurance, as the Dow Jones Industrial Average soared 11% yesterday — its largest single-day gain since 1933.

Needless to say, the reception to the stimulus package has been great so far. Yet, some are asking, where will the $2 trillion come from? The question proves legitimate when considering the totality of US Dollar circulation was $1.75 trillion as of February 2020. And that figure is directly from the Federal Reserve.

How will the incoming flood of funds from the coronavirus stimulus package impact the value of the US Dollar?

The Federal Reserve’s Actions Against Coronavirus

Since the Federal Reserve is the central bank of the United States of America, it’s important to understand what the Fed is doing in an effort to help the economy. So far, we’ve seen a number of actions.

According to an announcement Monday, the Fed is buying debt. The Fed has purchased bonds from the US Treasury and mortgage debt from Fannie Mae and Freddie Mac. But now, the Fed says it will expand its activity to buy debt from companies and local governments.

Why is the Fed buying debt? Well, the bond market is where both government and corporate debt is traded. Typically, due to their low volatility, bonds are considered a safe investment. With the impact of the coronavirus however, the bond market has seen better days.

Investors are now cautious of buying bonds. That’s why the Fed is now buying debt — to lubricate the markets a bit, likely in an attempt to encourage other investors to do the same.

How is the Federal Reserve Helping Businesses?

The Fed is also active in helping businesses directly. In general, there can be two categories of businesses impacted by the coronavirus. On the one hand, there are businesses whose revenue has come to a crashing halt. This group includes restaurants and bars, for example. These types of businesses are simply out of the Fed’s grasp at this point.

The other group constitutes those who are still healthy or have seen minor bumps — but are at a serious risk of danger. These types of businesses rely on debt in order to maintain operations.

Some have been hurt by the economic impact of the coronavirus but can survive if they are able to borrow and meet all expenses. Yet in order to borrow, they need access to credit. With higher than normal risk in the forecast, lenders are now reluctant to lend funds.

The stakes are high here: if businesses aren’t able to cover expenses, more doors will close, and the unemployment rate will continue to increase. For the larger economy, higher unemployment means less spending, which can ultimately lead to an economic nosedive.

Typically, the Fed manages this type of situation by lowering interest rates. This usually persuades companies to borrow funds, which eventually distributes money back into the economy through spending. But low interest rates do nothing if banks still won’t lend money — a trend becoming all too popular.

This is why the government has decided to implement a $2 trillion stimulus package: to directly inject money into the economy in an effort to avoid an economic meltdown altogether. So, where is the $2 trillion coming from? And how will it impact the value of the US Dollar?

Where Does the $2 Trillion in the Coronavirus Stimulus Package Come From?

Much of what we’re seeing from the Federal Reserve and its chairman Jerome Powell resembles the action taken during the 2008 financial crisis. At that time, the Fed was led by Ben Bernanke.

From 2007 to 2009, unemployment peaked at 10% while almost $10 trillion worth of assets disappeared. Most of the value stemmed from the housing market and retirement accounts.

To prevent an even worse disaster, the Fed injected $412 billion into banks. So, when it pumps money into the economy, where does the Fed get its money?

In response to the 2008 financial crisis, the US government acquired funds in two ways. One involved the US Treasury, while the other involved the Federal Reserve.

The US Treasury received money by borrowing it. While its primary job is collecting taxes, borrowing isn’t out of the norm here. Whenever the total amount of taxes collected fall short of federal expenses, the treasury borrows to make up the difference.

As a result, many investors collectively decided the US Treasury was a safe place. They purchased bills, notes, and bonds from the US Treasury — at abnormally low interest rates, signaling their desperation in finding a safe-haven for their capital.

When it comes to the Federal Reserve, well, it created money. While it might sound strange, this is what the Fed does.

How Does the Federal Reserve Create Money out of Thin Air?

While in early February of this year the Fed had $1.75 trillion in circulation, the Fed also had $4.2 trillion in total assets. You see, the Fed is ultimately the most powerful registrar in the world. Much of the funds it actually keeps are ‘digital dollars’, or rather, ‘digital promises’.

An overwhelming majority of US money supply is either debited or credited from the Fed to major banks — 100% electronically. The Fed can actually create millions of US dollars without printing a single one.

In reality, this is usually what happens. Paper money is printed by the US Mint once banks lend the funds on their electronic balances to consumers in the economy.

Stunned? The process probably isn’t too different from the way you receive and spend funds. If you get paid via direct deposit for example, your bank account receives an electronic credit. When you buy something with your debit card, your account is debited — electronically. No one touches a single dollar.

Though the process with the Fed is a bit different on a deeper scale, the same idea generally applies. The Fed can ultimately issue US Dollars to banks through electronic credit.

Naturally, there are dangers here. Influencing both the amount of currency in circulation — or in reserves — can result in inflation or deflation.

If there’s too much money in circulation, inflation becomes a risk. This can easily lead to hyperinflation, where there’s so much total supply of the US Dollar that the value of each dollar falls sharply.

On the contrary, there can also be an insufficient amount of money in circulation. This is called deflation, and it usually happens when companies and individuals are afraid to spend or lend.

So, given that, we’ve finally arrived at the big question.

How the Coronavirus Stimulus Package Will Impact the US Dollar

The US Dollar is seeing notable highs when compared to recent past. When looking at the Forex markets, the US Dollar saw multi-year highs against both the New Zealand and Australian dollars last week. At one point, the US Dollar had gained more than 5% over the course of two weeks.

In the midst of economic uncertainty, the stock market has crashed — but investors have been flurrying to the US Dollar as a safe-haven. As a result, US Dollars are in short supply, driving their value up.

The rise has dropped off in recent days. But still, the US Dollar remains around the highest it has been in several years.

As we learn more about the coronavirus stimulus package, it only seems predictable that an influx of $2 trillion will slow the ongoing surge for US Dollars. The value of the US Dollar, when compared to other currencies, is likely to decrease in light of the stimulus package. In an attempt to prevent deflation, it’s safe to say that a decrease in US Dollar value is one goal of the bill after all.

The coronavirus stimulus package will theoretically strengthen the US economy. This could result in even more of a demand for the US Dollar however, especially if other leading currencies continue to drop in value. Remember though — a primary purpose of the stimulus package is to prevent deflation and pump money back into the economy, getting the country’s economic wheels turning again.

Therefore, if the coronavirus stimulus package results in the US Dollar continuing to increase in value, it’s certainly possible that the Fed would sell its domestic currency holdings. If the Fed took this route, it would be attempting to decrease deflation by weakening the US Dollar’s exchange rate.

Ultimately, keep in mind these forecasts encompass the short-term future. While they are ultimately unknown, the long-term future is even foggier.

In a White House press briefing late Wednesday evening, US Secretary of the Treasury Steven Mnuchin said the coronavirus stimulus package is expected to cover the US economy for a period of three months.

Precisely where the coronavirus pandemic — and the US economy as a whole — will be in three months’ time, is anybody’s guess.

How do you think the coronavirus stimulus package will impact the US Dollar? What will the situation look like in three months? We want to know what you think in the comments section below.