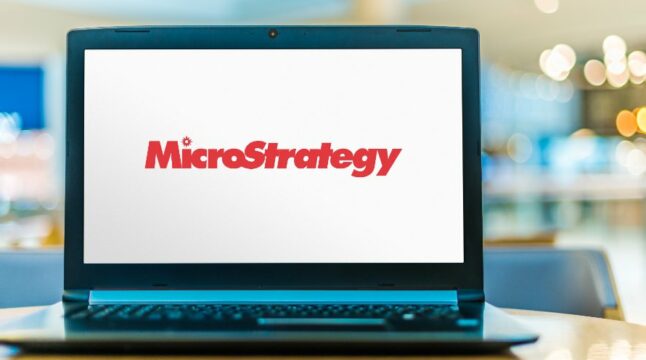 Chris Bloomstran believes MicroStrategy stock is trading on 2.9x NAV, suggesting that buying MSTR today is like buying bitcoin at $41,000.

How is MicroStrategy’s Bitcoin Strategy Paying Off?

In late 2020, MicroStrategy raised eyebrows by announcing that it had acquired $250 million worth of bitcoin in a bid to hedge against inflation and diversify its portfolio. At the time, the move was interpreted as a bet on the volatility of bitcoin.

MicroStrategy proved to be resolute in its acquisition of more bitcoins. The company not only continued its bitcoin buying spree but also made the flagship cryptocurrency its primary treasury reserve asset. By the end of 2020, the company had spent over $1 billion on bitcoin.

As reported, the software company’s bold bet on bitcoin initially paid off well, particularly in early 2021 when the leading cryptocurrency was rallying. The company’s stock, which was trading at around $130 per share when the company adopted bitcoin, taped a record high of $1,272 in early 2021, posting an increase of more than 1,000%.

However, things started to go south for MicroStrategy after bitcoin’s bull run ended in May 2021. The company purchased more bitcoin, but falling prices continued to wear away the value of its holdings. So much so that the company took a non-cash digital impairment charge of $170.1 million in the first quarter of the year, and another $917.8 million digital asset impairment charge in the last quarter.

Chris Bloomstran, the president and chief investment officer of Semper Augustus Investments Group, believes MicroStrategy is currently trading higher than its intrinsic value. The analyst has estimated that the company’s shares trade on 2.9x Net Asset Value (NAV), suggesting that purchasing MSTR today is like buying Bitcoin at $41,000. He said:

“Seems you need a $5.3 billion market value of $MSTR’s Bitcoin, or $40,873 per Bitcoin, simply to justify today’s price. In other words, the shareholder doesn’t get to the economic value of the net assets until Bitcoin rises by 78%. You are paying 2.9x current NAV for MSTR.”

Former MicroStrategy CEO Michael Saylor has reportedly called MSTR a “proxy ETF” for Bitcoin during the company’s earnings call. However, considering Bloomstran’s estimate that the stock trades on 2.9x NAV, it would be a wildly expensive ETF.

This is particularly true given that Bitcoin trades around the $23,000 mark on crypto exchanges. Furthermore, traders even have the option to buy BTC at a large discount as exchange-listed GBTC trades at a 33% discount to NAV, which is like buying BTC at $15,400.

“That’s a lot of premium considering someone who wanted Bitcoin could pay $23,000 today and participate in 100% of any upside,” Bloomstran said, noting that the company’s upside is muted by a $2.3 billion gap. “Leverage ensures a bankruptcy of MSTR well before a drop to zero. Both sides are an asynchronous, bad bet,” he added.

Do you think buying MSTR today is a wise move? Let us know in the comments below.