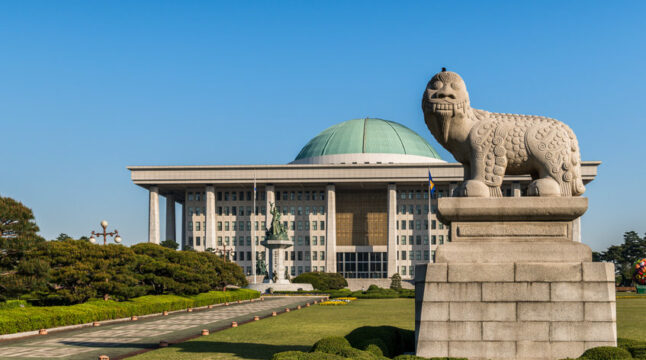 Yoon Suk-yeol has also promised to ease tax requirements on crypto investment profits and to review a ban on ICOs.

Yoon Suk-yeol, a conservative former top prosecutor, managed to defeat his chief liberal rival Lee Jae-myung to become South Korea’s new president after a tightly-contested election that many critics refer to as the “Squid Game Election.”

Locked in an extremely tight race, both candidates tried to appeal to their target audience in one way or another—and Yoon managed to win the support of the younger demographic by advocating blockchain-based innovations like NFTs and being vocal about positive crypto regulation in the country.

In an attempt to sway younger voters in the final days of the election, Yoon released non-fungible tokens (NFTs) featuring images and videos of himself. In total, Yoon intends to mint 22,329 NFTs on the AERGO blockchain, an open-source hybrid blockchain protocol that combines aspects of public and private blockchains to cater towards enterprise and government-level use-cases.

It is worth noting that Yoon is not the only politician to have minted NFTs in South Korea. The CCCV marketplace also prominently displays NFTs issued by other South Korean politicians, cementing it as a legit campaigning strategy going forward.

Yoon, who won by a margin of less than 1%, has also pledged to deregulate the country’s crypto sector. According to a report by local outlet Yonhap News, Yoon has vowed to remove the excessive crypto regulations imposed by the former government. During an event in Seoul, he said:

Specifically, Yoon has promised to increase the threshold for becoming eligible to capital gains tax on earnings from digital assets from $2,000 to $40,000. He also pledged to revisit a ban on initial coin offerings (ICOs), a method of raising funds in crypto, which went into effect back in 2017.

Notably, Yoon and his rival even entered the metaverse to answer questions from avatars believed to be men and women in their 20s and 30s. Both have reportedly made crypto-friendly promises to appeal to the nation’s 5.58 million crypto traders, who are mainly young men.

Digital assets are popular investment options among South Korea’s young generation. A 2021 survey showed that 49.8% of South Korean workers aged between 30 to 39 have invested in cryptocurrencies, and 37.1% of workers in their twenties have poured money into digital assets.

Nevertheless, an exit poll conducted by three South Korean broadcasters shows that 58.7% of men in their 20s and 52.8% of men in their 30s have voted for Yoon, suggesting that Yoon’s strategy to target young men has paid off.

While Yoon has managed to win the election, opinion surveys show that both candidates have a lot of critics. In fact, the election was anything but peaceful, with some even calling it the ‘Squid Game Election,’ referring to the hit Netflix show where people are killed if they lose children’s games.

There is widespread speculation that the loser will have to face trial and could even get arrested. That is because both Yoon and his rival Lee have accused each other of having ties with an allegedly corrupt land development scandal.

“It’s a dreadful presidential election when the losing contender faces prison. Please survive this dogfight in the mire!”

Do you think South Korea could become a crypto hotbed under Yoon’s crypto-friendly government? Let us know in the comments below.