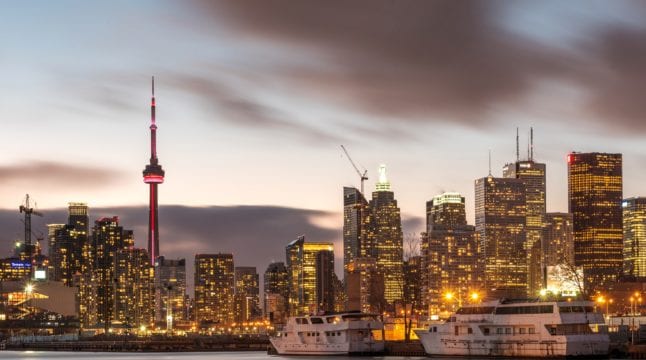 It remains to be seen if cryptocurrency ETFs will maintain the same level of growth as traditional commodities and stocks.

In a year of Bitcoin milestones, one more is not surprising. The Canadian stock exchange has the historic privilege to be the first to host a Bitcoin ETF. Abstaining from derivatives trading, the new fund represents low risk and further normalization of the world’s largest cryptocurrency by market cap.

Bitcoin Joins the Likes of S&P 500

Canada has leaped over its American neighbor in reaching another Bitcoin milestone. Toronto Stock Exchange (TSX) launched Bitcoin’s first ETF on the North American continent as of yesterday. Called the Purpose Bitcoin ETF and backed by physically settled Bitcoin, it is trading as:

Within the first day of trading, Bitcoin ETF surged in value, only to stabilize at around $10.14. During the first hour of the launch, the fund traded $80 million worth of shares, surpassing the average trading volume for ETFs.

The creator of the first Bitcoin ETF is an asset management company called Purpose Investments. Founded in December 2012, it represents a Canadian mini-BlackRock, managing $10 billion AUM as of November 2020. A subsidiary of Purpose Financial, this is not the company’s first foray into the blockchain space.

In 2018, Purpose launched Ether Capital (NEO: ETHC), leveraging the expertise of blockchain developers with venture capital’s funding. Effectively, they are serving as a launching ramp for investors interested in DeFi, which almost entirely runs on the Ethereum blockchain.

The Benefits of Bitcoin ETF

ETFs – exchange-traded funds – are known as expedient investment vehicles. Because of their order flexibility, lowered risk due to diversification, tax benefits, and lower fees, ETFs have become even more popular since the onset of stock-trading apps, with S&P 500 leading the charge.

Purpose Bitcoin ETF aims to continue that tradition by attaching an annual management fee of just 1%. The fund will only invest in physically settled Bitcoin, avoiding investing in derivatives. As a fully vetted investment vehicle in coordination with Ontario Securities Commission (OSC), this will entice more investors to get on board the Bitcoin train. The CEO of Purpose, Som Seif, certainly thinks so:

“We believe Bitcoin, as the first and largest asset in the emerging cryptocurrency ecosystem, is poised to continue its growth trajectory and adoption as an alternative asset, further cementing the investment opportunity it presents,”

Previously launched Ether Capital will be directly involved in the management of the new Bitcoin ETF.

Although one would think that all major institutional investors had already embraced Bitcoin, there are still many who are wary of the burgeoning digital asset. For such investors, Purpose Bitcoin ETF represents a means of reducing the risk associated with owning Bitcoin via a digital wallet. It has a long way to catch up with the likes of the S&P 500, but its journey begins.

Which traditional ETFs have most often found themselves in your portfolio? Let us know in the comments below.