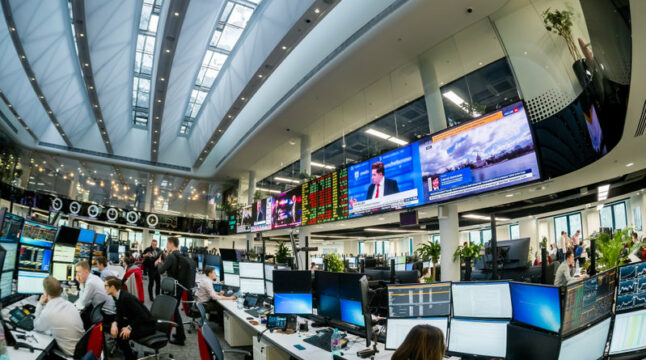 Moscow Stock Exchange Reopens but Only for Russians, MOEX Gains 5%

Russia's stock market registered impressive gains after reopening under restrictions, but analysts believe this would be short-lived.

Following a month-long closure, the Moscow Stock Exchange resumed trading on Thursday, allowing nationals to trade in 33 Russian securities. However, the reopening came with certain limitations.

Short-selling was not allowed and foreign investors were prohibited from selling stocks completely. It is likely that these decisions stem from the Russian Government’s will to prop up the country’s economy artificially as Western sanctions continue hurting the country.

The Central Bank of Russia has allowed trading in 33 shares included in the Moscow Exchange Russia Index (IMOEX), the main ruble-denominated benchmark of the Russian stock market. The trading took place on Wednesday between 9:50 to 14:00 Moscow time (3 a.m. and 7 a.m. ET).

The 33 Russian equities are largely blue chips and include state lenders Sberbank and VTB, some of the country’s major energy corporations like Gazprom and Sberbank, and oil giants Rosneft and Lukoil.

However, the reopening did not come without restrictions. The country’s central bank banned short-selling, effectively barring residents from betting against the listed securities and prohibiting free price discovery. Furthermore, foreign investors are not allowed to sell stocks or OFZ ruble bonds, which are federal loan bonds issued by the Russian government, until April 1.

The restrictions come as Russia strives to stem the financial meltdown from extensive international sanctions implemented by the US and its allies after it invaded Ukraine. Foreign-listed shares in Russian companies have sharply slumped over the last month, and there are speculations the same fate could be waiting for local markets once they fully resume trading.

In fact, to prevent any major sell-off, Russia has pledged to spend up to 1 trillion roubles ($10.3 billion) from the country’s National Wealth Fund (NWF) to buy shares in Russian companies, effectively bringing them under state control. The country has also introduced capital control measures like banning residents from transferring foreign currency.

Meanwhile, in a statement, the White House called the reopening “a charade: a Potemkin market opening.” Daleep Singh, a Deputy National Security Advisor for International Economics in the Biden administration, said:

The MOEX Russia Index went up by more than 10% during the early hours of the trading session before paring gains to just 5% by around 13:00 Moscow time. Oil giants Rosneft and Lukoil also registered impressive gains, increasing by more than 17% and 13%, respectively.

However, shares of Russian airline Aeroflot took a hit and dropped by as much as 20% before trimming losses to around 12% after midday in Moscow.

Jeroen Blokland, founder and head of research at Dutch investment firm True Insights, argued that investors might be going back into Russian stocks “based on the idea that valuations will revert to pre-war levels.” He added:

“But this is unlikely to happen. It’s very difficult to assign fundamentals, but what we do know is that (self) sanctions will remain for a very long time.”

Echoing the same point of view, the Institute of International Finance believes Russia’s economy is slated to suffer more in the near future as domestic demand will fall sharply, and a “collapse in imports” would offset a decline in exports.

The industry body has also projected that the Russian economy will contract by 15% this year due to the ongoing conflict in Ukraine. The IIF noted that the “self-sanctioning” of foreign companies would be a major contributing factor. It said:

“Together with a decline of 3% in 2023, this will wipe out fifteen years of economic growth. However, the impact on medium- and long-term prospects is likely to be even more severe.”

When do you think Russia will fully resume stock market trading? Do you think the market would see a sell-off once it fully opens? Let us know in the comments below.