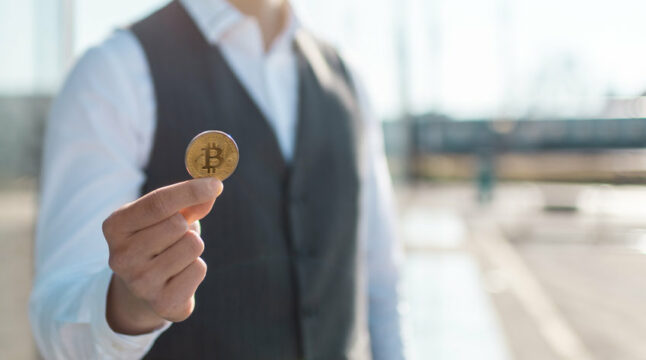 Terra's use of BTC as a collateral for its stablecoin furthers the idea of it being a modern, digital, and decentralized gold.

On Monday, we reported on Terra (LUNA)’s big move to purchase $10 billion worth in Bitcoin to use as collateral for its UST stablecoin. By the same token, Luna Foundation Guard (LFG) raised $1 billion in funds to establish the Bitcoin reserve.

Could this be the trigger for Bitcoin to break its months-long stagnation?

In follow-up news, Terraform Labs got a green light and appears to have followed through with its plan. As of today, a $125 million TerraUSD (UST) transfer took place purportedly belonging to Gnosis Safe address under Terra’s control, detailed here on EtherScan.io.

Gnosis Safe is a multi-signature smart contract wallet suitable for both businesses and individuals alike to securely manage large crypto funds. Coinciding with the transfer the same day, Bitcoin rallied by 5.2%, from $40,952 to $43,102. As of press time, Bitcoin is trading at ~$42,500.

Needless to say, $10 billion worth in BTC is a lot more than Elon Musk’s $1.5 billion acquired in January 2021. As a single payment, the news potentially triggered Bitcoin’s price to jump by 17%, to $44.2k. Terra’s incremental BTC acquisitions are therefore poised to be less impactful. However, three days prior to the $125 million transfer, Do Kwon, the co-founder of Terraform Labs, already regretted the $10 billion buy announcement.

In a world of shifting monetary winds, it is prudent to have a much larger asset that is not tied to Terra’s ecosystem. Bitcoin serves just such a function to ensure the UST stablecoin peg remains tied to the dollar. UST is notably an algorithmic stablecoin, unlike USDT or USDC which are backed by USD reserves.

In times of great market volatility, it is possible for algorithmic stablecoins to de-peg momentarily. This briefly happened to UST on May 24th, 2021, in the aftermath of Elon Musk’s tweet that Tesla would no longer accept Bitcoin as payment. This caused Bitcoin price to drop by 17%, with the ensuing crypto market disruption pushing UST down to $0.96.

Since then, Terra (LUNA) ecosystem drastically increased its liquidity, becoming second to only Ethereum at 12.51% TVL ($26.92 billion). Likewise, Terra’s stablecoin market cap increased by 36% since February, from $11.23 billion to $15.7 billion, threatening to overthrow Dogecoin’s 13th rank.

The implication of Terra using BTC as a stabilizing reserve is straightforward. Just as USD was backed by gold, Bitcoin is adopting that safe haven role. The period between 1944 and 1971 is commonly known as the Bretton Woods era, after the eponymous location in New Hampshire.

As WWII was drawing to an end, the Bretton Woods agreement, signed by 44 nations, backed the USD with gold reserves. In turn, other nations’ currencies were pegged to the dollar. However, after the USD trade deficit became unsustainable, the gold collateral system was abandoned. Instead, a new era of the petro-dollar and money printing started, leading to US’s national debt rising to $30 trillion over the years.

Translated to blockchain lingo, this would be akin to having a highly centralized coin with an infinite money supply. Over the decades, the inflation rate went up and down as the Federal Reserve tweaked its monetary policy. The Fed has been able to leverage these monetary policies stemming from the dollar’s status as a global reserve currency.

After all, USD is the most traded currency in global foreign exchange. However, this era too may be coming to an end. The Ukraine-Russia conflict triggered a new multi-polar reordering, with Russia, China, and India potentially forming its own economic block.

India is highly reliant on Russia’s fertilizer supplies for its massive farming industry needed to feed over 1 billion people, as a part of its $10.8 billion bilateral trade. With the West escalating financial isolation of Russia, the largest nation by landmass already offered India a discount for trading in Russian rubles, ditching the dollar.

Likewise, Saudi Arabia is hinting at accepting China’s Yuan instead of the Dollar for their daily $320 million worth of trading. While this is a far cry from the US dollar’s prominence, it would still mark a trend in which the petro-dollar domination ends. In such a new monetary world order, the Fed would have few means to stop inflation from going higher.

In turn, if left untouched by the EU-like ban initiatives, Bitcoin is positioned to become a global reserve currency, unmoored from nation-states. In the short term, Terra’s Bitcoin backing for its stablecoin may nudge others along that path.

If inflation continues to increase, do you think the Fed would resort to interest rate hikes above 0.25 percent? Let us know in the comments below.