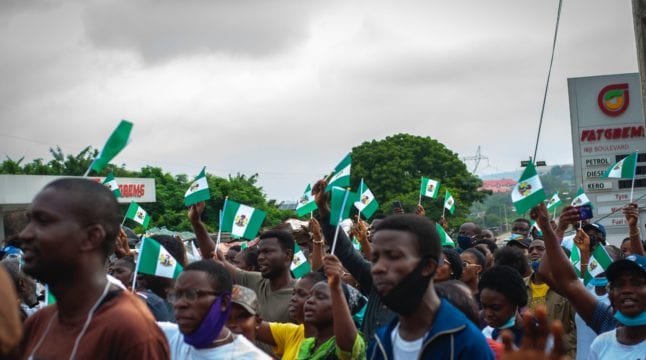 As life finds a way, so does cryptocurrency as the only form of sovereign money detached from the foibles of rulers.

When Satoshi Nakamoto developed Bitcoin, Nigeria might have been furthest from his concerns. Yet, Nigeria holds all the ingredients to become the first large nation to unofficially supplant the failing official currency with his monetary invention.

If the First World Struggles to Recover, How Will Developing Nations Fare?

Response to the pandemic has made the vulnerable even more so. This not only pertains to the decimation of small businesses, having to deal with 38% lower revenue while large corporations reaped record profits. So far, the bottom-half of society across the West had been hit the hardest.

According to Opportunity Insights and official government data, 80% of the 9.6 million jobs lost in 2020 were from the pool of low-wage earners.

In the meantime, the Federal Reserve couched higher-than-expected soaring prices as “transitory inflation”, as if there is such a thing as permanent inflation.

“The sectors most adversely affected by the pandemic remain weak but have shown improvement. Inflation has risen, largely reflecting transitory factors.”

Likewise, Treasury Secretary Janet Yellen sees no inflation problem, referring to rising prices of commodities and fuel as transitory. Specifically, according to the Bureau of Labor Statistics, we’ve seen a:

It is impossible to say whether the ongoing inflation surge will be transitory in the sense the Fed sees it. However, fans of monetary history would find such statements eerily familiar.

During the German Weimar hyperinflation, top economic experts were assuaging the public in a similar manner, amid already astronomic devaluation of paper marks.

“In proportion to the need, less money circulates in Germany now than before the war.” (Julius Wolfe, 1922).

“However enormous may be the apparent rise in the circulation in 1922, actually the real figures show a decline.” (Karl Eister, 1923).

Between these two statements, paper mark (Papiermark) had gone down in value from near-1000 to near-1,000,000 for one gold mark. Fortunately, the USD acts as the world’s global reserve currency, so the Fed may be correct in managing the lockdown fallout. One thing is for certain, as this black swan affected the most vulnerable in the West – with all its resources and reserves – on the global stage, it affected developing nations far more severely.

Nigeria: Out of the Frying Pan, into the Fire

Last month, the Tokenist noted a peculiar situation with Nigeria. As its central bank (CBN) prohibited commercial banks from trading in cryptocurrencies, Bitcoin’s price surged to $80k on its local Luno exchange. This represented a never-obtained BTC price in the rest of the world, similar to South Korean Kimchi Premium, but for different reasons.

Even prior to the pandemic response fallout, Nigeria was not a thriving country, to say the least. In 2019, Nigeria’s per capita GDP was $2,229, which was 29 times less than US GDP for the same year. Likewise, its inflation has been rampant for four years in a row. In 2016, it had reached 17.3%.

The drop in oil demand during 2020 and 2021, massively exacerbated Nigerian economic woes, as it is the country’s main export. Consequently, its inflation reached a four-year ATH of 18.17% in March. Leading ahead, food prices rose by 21.8% in February.

Keep in mind, this is happening in Africa’s most populous country of 201 million, with an undeveloped infrastructure and militants causing instability. CBN made efforts to curb the rampant inflation by prohibiting USD influx through imports, but this had no measurable effect.

In the middle of dried-up oil demand, the worsening of existing economic fundamentals, and a decline in remittances, there is one tool Nigerians have – smartphones. As of 2019, almost the entire population had them, at about 185 million mobile subscriptions. This translates to access to the internet, which in turn translates to cryptocurrency access.

Combined with a very young population – over half under 19 years old – this inevitably made Nigeria the leader in African crypto adoption. As their fiat currency, naira, continued to lose value, Bitcoin adoption only soared upward.

This makes Nigeria an outstanding case study for what happens when a country’s central bank decides to de-platform cryptocurrency. So far, the results are encouraging:

The question is, if this continues, and over half of the population starts using cryptocurrency exclusively, what role would the government then have? It seems it already has trouble establishing physical security, let alone monetary security. Moreover, there seems to be a critical mass of crypto users, across all strata of society, sufficient enough to exert pressure to backtrack some measures.

Furthermore, government overreach, while simultaneously failing to provide any solutions, is likely to trigger the rise of privacy coins, such as Monero (XMR) or Pirate Chain (ARRR), both of which are deflationary as well. After all, once you dabble in the crypto world, other digital assets are just a few taps away.

Do you think Nigeria will demonstrate to the world’s governments that it is futile to ban cryptocurrencies, which will discourage them from even attempting it? Let us know in the comments below.