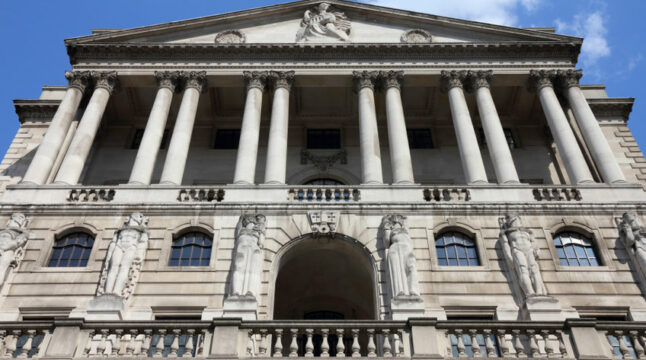 The Bank of England raises interest rates to a 13-year high, with inflation expected to hit 10%, meanwhile, the Pound Sterling is weakening against other currencies.

Trailing in the footsteps of its counterpart in the west, the Bank of England (BOE) revealed a hike in its interest rates. The BOE hiked its primary interest rate by 25 basis points to 1%, its highest level in 13 years, as it tackles soaring inflation.

With millions of British consumers struggling with soaring living costs, the Bank of England opted for a fourth consecutive rate hike since December. Like many other central banks globally, the BOE is faced with guiding the economy through an inflationary spiral aggravated by Russia’s invasion of Ukraine. This saw BP and several other multinational companies exit Moscow as global sanctions rained in.

Consequently, after a 6-3 vote, the Bank’s Monetary Policy Committee authorized a 25-basis-point hike. This brings the basic interest rate to 1%, the highest recorded over 13 years. The Bank stated that the minority members favored a 0.5 % point increase in interest rates to 1.25%.

Earlier in March, Inflation in the UK hit a 30-year high of 7% amidst rising energy and food prices. The price increase was three times more than the anticipated target of the BOE. A similar surge occurred in the US, with inflation hitting a 40-year high. Meanwhile, consumer confidence in the United Kingdom fell to a near-record low in April amid concerns about slowing economic development.

Furthermore, the UK’s central bank anticipates inflation to surge to around 10% this year due to the Russia-Ukraine conflict and China’s lockdown. This has led to a further grim outlook for the global economy and the UK. The Banks Monetary Policy Committee (MPC) said,

“Global inflationary pressures have intensified sharply following Russia’s invasion of Ukraine. This has led to a material deterioration in the outlook for world and UK growth.”

A Gloomy Outlook For the GBP

The fall of the Pound Sterling suggests that traders now believe the Bank would suspend its rate hike cycle to limit the impact on debt levels. The general belief is that citizens are more concerned about the growing possibility of a recession rather than further interest rate hikes.

Accordingly, this belief is backed by sentiments from several analysts. James Smith, a developed economies strategist at ING, believes the current outlook for personal finance is worse than during the global recession of 2008. This, he believes, makes the future pathway for the pound sterling grim, with the prospects of further decline.

Following a strong performance after the Federal Reserve interest rate hike, wall street saw a sharp reversal erasing all its gains. The benchmark S&P 500 Index was down 4%, with all its 11 major industry groupings suffering significant losses.

Also, the tech-heavy Nasdaq 100 index fell as much as 5.1% intraday, its worst drop since Jan. 24. Meanwhile, the blue-chip Dow Jones Industrial Average lost 3.4%. The sell-off has been linked with uncertainty over whether the Fed’s aggressive tightening cycle would ultimately plunge the US economy back into recession.

Do you think the global increase in interest rates will help curb inflation and prevent a recession? Let us know your thoughts in the comments below.