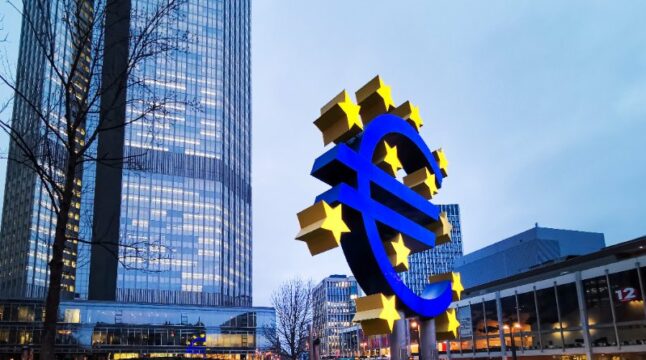 The euro drops to the lowest level against the dollar since 2002.

If one were to quantify the Great Reset in numbers, few indicators would capture it as well as the fall of the euro against the dollar. For nearly twenty years, the euro has been trading above the dollar. However, due to historic financial events unfolding on a global level, the currency has almost reached 1:1 parity with the USD.

Euro launched in 1999, as a background electronic money for institutions. However, when it transformed into a “real” banknote form in January 2002, it only took one year to trade above the dollar. At the height of the Great Recession of 2008, the euro was 1.6x more valuable than the USD.

Presently, the euro is in use by 19 out of 27 EU member nations, covering ~341 million people. At large, this Eurozone constituted 1/6th of the global economy in 2020, at $15.2 trillion GDP. This all changed when the lockdowns hammered the economy like no event in recent history.

The effect of the lockdowns in response to the COVID-19 pandemic was as severe on Europe’s economy as one would expect from a global war. Most cited research on the lockdown costs, by Mandel and Veetil, put the loss at 9% of global GDP, as the most direct measurement. This is certainly visible with the EU’s loss of GDP growth in 2020, being the worst in over 20 years.

In numbers, the EU settled for a $756.73 billion recovery package in July 2020. Altogether, safety nets and programs designed to alleviate lockdown effects accounted for $2.02 trillion.

Of course, like every government, EU nations rely on the economic output of their citizens to meet those numbers, both present, and future. The problem is, that a simmering military conflict threw a wrench into that recovery engine.

Impact of Europe’s Sanctions on Russia

Throughout history, it is commonplace to find economic blockades as a supplement to military conflict. They are typically performed from a position of strength. Perhaps, in this case, we can see a major exception in modern history.

The EU seems to have performed its economic blockade of Russia from a position of severe resource weakness. By sanctioning Russia, the EU likely self-inflicted a two-fold strike on its citizens.

Firstly, it cut off its biggest supplier of oil, natural gas, fertilizers, and other commodities. Germany alone relies on gas as 1/5th of its energy needs, which is supplied by Russia to the tune of 38%.

Secondly, the EU sanctioned Russia while undergoing the systematic dismantling of its own energy infrastructure in order to go “green”. Being the lifeblood of any economy, once energy becomes more expensive, trading parity also becomes lopsided. Combined with the lockdown push, the Eurozone trade balance collapsed as a result.

As the EU’s largest budget contributor, at $28 trillion in 2020, Germany is the Eurozone’s economic engine. Germany is also the country that has been the most vigorous in dismantling its nuclear infrastructure, with only a few plants remaining, presently at 3 out of the prior 17.

“[The energy crisis] will send shockwaves throughout the country. Banks will ramp up their business with installment loans, and ailing companies will fall into insolvency.”

Likewise, Électricité de France (EDF) nuclear operator announced record-low energy output in 30 years. In the meantime, the Russian ruble, now a commodity-based currency, hit its record performance in 7 years thanks to a massive trade uptick with China and India.

What Does EU’s Decline Mean for the Dollar?

Both the US and the EU seem to be on the path to recession. Lockdowns triggered multi-trillion financial injections, for which the cost is inflation, supply chain disruption, and lower economic output. Central banks are now trying to stifle inflation caused by raising interest rates.

In turn, higher interest rates raise capital costs, wiping out trillions from the stock market. For the US retirement accounts alone, the market selloff melted $3 trillion, according to data collected by Alicia Munnell, director of the Center for Retirement Research at Boston College.

However, because the dollar still enjoys world reserve currency status, the Federal Reserve has more leeway to combat inflation than its EU counterpart, the European Central Bank (ECB). For investors, the dollar is then poised to become even more of a safe haven.

With all things equal, this translates to an even greater EUR/USD disparity down the line, according to Deutsche Global Head of FX Research, George Saravelos.

“If both Europe and the U.S. find themselves slip-sliding into a (deeper) recession in Q3 while the Fed is still hiking rates, these levels [0.95-0.97 in EUR/USD] could well be reached.”

Nonetheless, the Fed could also shift, or loosen, quantitative tightening policies if the July 13th Consumer Price Index (CPI) report shows an inflation peak. Either way, the parity between USD and the Euro is likely to continue for the coming future as global markets remain uncertain.

Do you see the Euro regainig its lost value anytime soon? Let us know in the comments below.