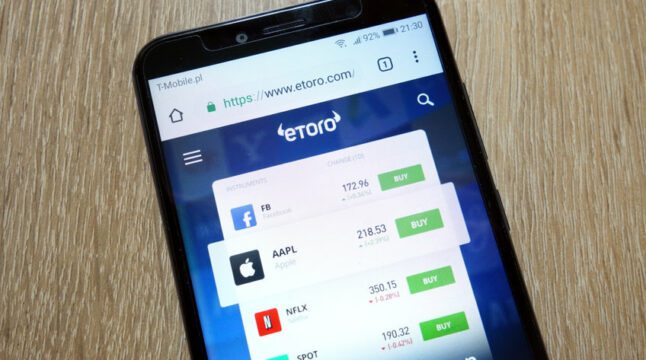 Robinhood’s IPO valuation is over 3 times higher than eToro’s, yet this is not reflected in their revenue streams.

With heavy baggage under its belt, Robinhood’s Q2 2021 numbers suggest it has powered through much of the ill will it generated. eToro posted strong numbers for Q2, but the firm has yet to reach Robinhood’s net revenue numbers as it prepares to go public through an upcoming SPAC merger. What’s keeping eToro from making ground in the US?

eToro vs. Robinhood Earnings for Q2 2021

Although The Tokenist already covered Robinhood’s Q2 2021 earnings report, we can now compare it with its rival – eToro. Both companies saw much growth for the Q2 period, which ended June 30, 2021. Robinhood reported the following earnings, with all numbers compared to the previous period of Q2 2020:

eToro, the global social investing platform that launched in the US market three years after Robinhood, in 2018, saw similar success for Q2 2021:

Based on these results, it seems that Robinhood absorbed much of the negative publicity coming from its delisting of stocks at the height of GME/AMC short squeeze in January.

Keep in mind that in the immediate aftermath of traders unable to liquidate certain positions, some online surveys reported 76% of users planning to leave Robinhood. Over half a year later, it seems that eToro is gaining traction. However, while both companies reported net increases in users and income, eToro suffered a setback.

Due to the costs associated with its upcoming Special Purpose Acquisition Company (SPAC) merger, eToro reported a net negative income of $89 million. However, what is most interesting to note is that eToro managed to exceed Robinhood in crypto trading volume.

eToro’s CopyTrader is its most popular feature that makes it stand out from the crowd. It allows you to follow professional traders with high performance ratio and copy their trades. Effectively, this is equivalent to hiring an expensive financial advisor, but for free. Unfortunately, this feature is still not available in the US.

What is Keeping eToro’s CopyTrader from the US Market?

To become a proper competitor to Robinhood in the US market, UK-based eToro has to offer an equivalent range of services. Although eToro plans to unroll stock trading and ETF investing, so far, it only offers crypto trading to US-based individuals.

In July 2020, eToro became a FINRA member as a prerequisite to offer social stock trading in the USA. As it stands now, it plans to launch stock trading in the latter half of 2021. One of the biggest obstacles to making this happen is the Dodd-Frank Act. This piece of legislation was enacted in July 2010, as response to the 2008 Financial Crisis. As one of the side effects of restrictions it imposes, it affects eToro’s social trading:

However, given that eToro plans a full rollout in the US under unchanged laws by the year’s end, it stands to reason they would somewhat tweak the social trading feature. Even if that doesn’t happen on time, we can expect to see a continued rise in crypto trading from both eToro and Robinhood.

If there is anything that would separate 2020/2021 from any other period, it would be the total money printing spree put on display by the Fed:

The dollar has been counting on its global reserve status to absorb its increased supply. If that weren’t the case, it could end up as something similar to the Venezuelan bolivar. Just recently, the hyper-inflated nation decided to lose 6 zeros from its domination, so that citizens don’t have to transport bags of money to buy a single carton of milk.

Further, experts now predict that crypto assets could replace fiat currencies in a decade. According to Deloitte’s blockchain survey report, 76% of respondents in the financial services industry (FSI) see cryptocurrencies as a strong alternative to fiat devaluation.

The ease with which one can trade in cryptos compared to fiat is another contributor to this sentiment. For Robinhood and eToro, it is then no wonder that a large chunk of their income stems from the explosive growth in crypto trading.

Note: Since this article was published, eToro has subsequently delayed its plans to go public via SPAC.

Do you think the Dodd-Frank Act should be revamped or stay as it is, even if it stalls innovation? Let us know in the comments below.