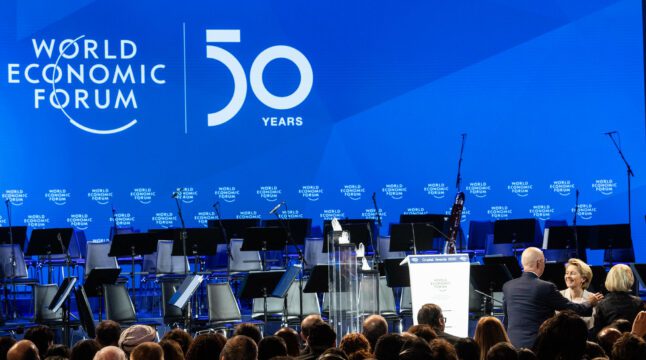 Cross-border SMS payments via blockchain tech are the future—according to these organizations.

Although blockchain is inherently decentralized, there’s arguably no central organization with more power to push certain blockchain projects ahead of others than the World Economic Forum. It appears such a push is well underway.

What is the World Economic Forum (WEF)?

Headquartered in Geneva, Switzerland, World Economic Forum is a network of networks, providing a platform for both governments and businesses. Comprised of over 390 corporations and banks across 60 nations, WEF aims to smooth out friction between governmental policies, sustainability, and economic efficiency.

As such, WEF generates initiatives that are then passed down to lower ranks of organizations across the globe. One of them covers investments related to ESG. Standing for Environmental, Social and Governance, ESG is a framework to gauge companies, products, and services against a particular set of ethics. Another framework is MSC (Multi-Stakeholder Capitalism), which combines the power of governments, corporations, and communities to achieve broader goals with the help of well-oiled capitalist tools.

Effectively, WEF sets up expectations for how businesses should operate. The more expectations are met, the more integrated these businesses become within the global ecosystem of governments, media, and finance. There is nothing this system of Global Governance doesn’t include.

As a subset of Financial and Monetary Systems, WEF strongly advocates blockchain technology as the future informational highway that securely connects all subsystems of global governance. Barely half a year after Ethereum launched, and long before DeFi protocols, in 2016, WEF made an educational video about the ‘radical’ nature of blockchain, forecasting that it will “move the future global economy towards distributed property and trust”.

At 2020’s WEF conference in Davos, a Swiss-based blockchain startup Dfinity unveiled the application for their Internet Computer (ICP). This ambitious project is also heavily funded. Internet Computer Protocol aims to revolutionize platform dependency by allowing anyone to either run software or publish content without relying on centralized hosting provided by giant companies like Google, Microsoft, or Amazon AWS.

Built with ICP, Dfinity showcased decentralized versions of TikTok called CanCan, alongside previous demonstration of LinkedUp, a decentralized version of Microsoft’s LinkedIn. Flushed with cash due to WEF’s exposure and financial networking, as of this May, Dfinity had launched a $220 million fund for development of dApps and ICP’s global infrastructure.

Given such influence, it bears keeping in mind which other blockchain projects WEF keeps track of. In June 2021, WEF published Cryptocurrencies: A Guide to Getting Started. In the 23-page paper, they picked six blockchain projects representing the future of distributed global economy. Out of six, Algorand, Cardano, Solana are generalist, smart-contract blockchains competing with Ethereum. Stellar, XRPL and Celo are intended for high-speed, global payments, while Celo focusing on turning mobile phones into virtual banks.

Out of the world’s 1.6 billion unbanked people, the majority of them are in Africa (50%) and South and Central America (38%). Instead of building up all the prerequisites for physical banks to cover them, mobile networks have become the go-to alternative. The most successful such project has become M-Pesa, launched by Kenyan Safaricom in 2007.  Since then, it has spread through African countries like wildfire. For instance, 11% of Ugandans have a bank account, while 43% of them now have a mobile payment account.

The system for mobile M-Pesa accounts is simple. An official M-Pesa agent ties one’s SIM card with an ID and the initial cash deposit. The agent then transfers that deposit to e-money. Then, this money can be sent to anyone via SMS by simply typing an amount on the phone. In essence, it works just like Cash App or Venmo, but for all generations of phones capable of SMS.

Supporters of Celo suggest the network is potentially a step up from both Cash App and M-Pesa. By running on a blockchain, it removes centralized vulnerability and turns a phone’s number into a public wallet address. Moreover, Celo blockchain has smart contract functionality which means it can take full advantage of DeFi protocols – lending and borrowing.

As with other blockchain protocols, the CELO token is used for gas fees and voting while CUSD is the stablecoin pegged to USD. The two tokens are interlinked, maintaining the USD tether.

Celo’s native wallet Valora currently has about 200,000 users spread out across 100 nations. One of the world’s largest telecoms, Deutsche Telekom, joined Celo Alliance for Prosperity this April. As one would expect, Deutsche Bank, which is Deutsche Telekom’s key financial advisor, is a WEF partner. More interestingly, as of August 9th, 2021, Deutsche Telekom picked Coinbase Custody for storing CELO tokens.

If you would assume WEF is in the mix there, you would be correct. Prolific venture capital firm Andreessen Horowitz, aka “a16z”, is a heavy investor in both Celo and Coinbase. Connie Chan, partner at a16z, is also Young Global Leader at the World Economic Forum. Just last month, a16z injected $20 million into Celo’s Valora wallet.

The digital asset space is full of uncertainties. But with organizations like the WEF, Deutsche Telekom, and a16z all looking in the same direction, the future looks bright—in some spots more than others.

Editorial note: The Tokenist would like to clarify that WEF does not currently hold any cryptocurrencies, as of August 17, 2021.

Deutsche Telekom serves 242 million mobile customers. With Celo in place, they could give each one a virtual bank. Do you think they will follow through?