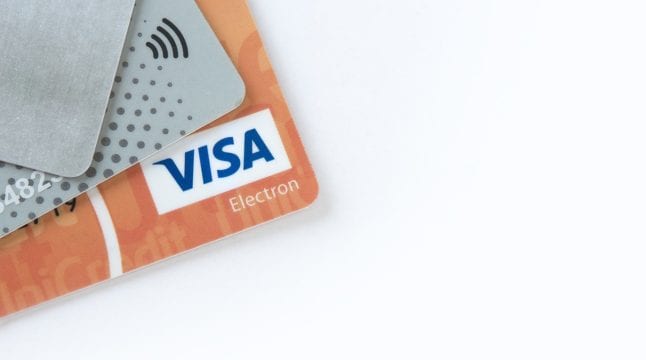 Visa and popular bitcoin cashback app Fold are ready to introduce customers to the first debit card which provides users with a bitcoin rewards program. The card will enable users to spend U.S. dollars and get bitcoin rewards, thus promoting cryptocurrency use in standard payments.

According to Visa’s official press release from July 2019, the global FinTech integration program was launched to implement FinTech solutions in the sphere of digital payments. The program was named “Fast Track” as it was meant to rapidly integrate FinTech businesses with Visa’s global payment network.

Since the launch of the Fast Track program, Visa has opted to make partnerships with several  FinTech companies including Astra and Binance. However, Visa’s endeavor to partner with Binance didn’t come to fruition. According to The Block, Binance has discreetly removed all info on the partnership with Visa from its website.

On the other hand, Visa and Fold’s teaming up proved to be very productive. Daily Hodl reports that San Francisco-based crypto startup Fold has successfully developed a co-branded Visa card. The card is intended to encourage consumers to take up the use of Bitcoin and pay with Visa cards at the same time.

However, the worldwide adoption of cryptocurrencies has been a turbulent process ever since Bitcoin appeared. Namely, in 2019, the Financial Conduct Authority of the UK invested efforts to ban Bitcoin-related financial products.

The integration of Bitcoin and traditional financial services has seen a slow past, but is starting to pick up steem. The London Block Exchange and Argento Access have readily embraced the use of cryptocurrency as they’ve launched the world’s first Bitcoin-denominated bond.

Having that in mind, Visa and Fold’s partnership may be a notable step forward when it comes to the integration of digital assets and payment services. The co-branded debit card will have the opportunity to introduce Bitcoin to an array of consumers worldwide.

Fold CEO and cofounder Will Reeves told The Block that Fold is, at the moment, one of the first companies that integrates digital assets with real world transactions. The new Visa/Fold debit card comes with an enticing feature as it rewards consumers with a bitcoin cashback for every purchase made with the card. While the card is scheduled to be launched in Q3 of 2020, Fold currently provides users with a 20% bitcoin cashback reward when purchasing gift cards from Uber, Target, and Starbucks.

That way, consumers can become familiar with the use of digital assets when buying physical products in the real world. Also, bitcoin rewards are likely to benefit Visa with a rise in the number of new customers.

The fact that Bitcoin has no expiration date can be of great use for consumers who get it as a reward. Moreover, many are interested in piling up Bitcoin, thus getting a chance to profit should its value rise. By using Visa and Fold’s co-branded card, consumers will get a unique chance to add bitcoins to their digital asset portfolio.

Visa is no stranger to the adoption of FinTech in their business. If the former Visa executive Roel Wolfert’s thoughts on the potential of security tokens are to be taken into account, it’s evident that Visa is a proponent of the use of FinTech in business. So, the collaboration with Fold is not surprising and, while this may be a small step, future collaboration could transform payment processes as we know them.

Will the first Bitcoin-friendly debit card lead to an increased adoption of digital assets? How likely is it for the consumers to profit from the Bitcoin rewards?Let us know your thoughts in the comments below.