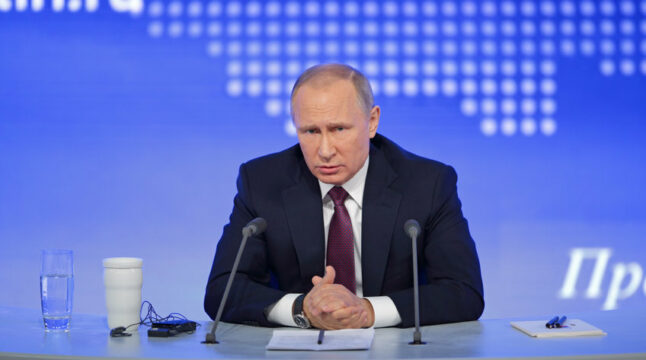 Russia's President calls on the Bank of Russia and the Ministry of Finance to find consensus over cryptocurrency regulation.

Vladimir Putin has urged Russia’s finance ministry and Central Bank to reach a unanimous decision over cryptocurrency after future discussions. He made the call in a video conference with Russian ministers, following opposing views by both institutions over the quickly evolving technology.

Recently, Kremlin has taken a softer stance towards cryptocurrency. It announced plans to create a Central bank digital currency(CBDC) and a crypto monitoring service to regulate the sector.

Infighting Among Russian Institutions Over Cryptocurrency

Last week, the Bank of Russia released a report titled  “Cryptocurrencies: trends, risks, measures,” which called for the outright ban of crypto. It cited the volatile nature of the asset class and its widespread use for illegal activities as reasons for this position.

Similarly, cryptocurrency mining, which has grown in popularity in Russia recently, and even received approval from the country’s parliament, has also come under scrutiny. According to Cambridge Bitcoin Electricity Consumption Index (CBECI), the Eurasian country ranks third for global mining hash rates behind the US and Kazakhstan. Its position as a mining hub could make this decision significant.

The report further pointed out that mining generates a new supply of cryptocurrencies and stimulates demand for services such as exchanges. It highlighted that this creates a non-productive electricity expenditure, undermines the energy supply of residential buildings, social infrastructure, and industrial objects. It also goes against the Russian Federation’s environmental agenda.

Russia’s Ministry of Finance has opposed the Central bank’s call to ban crypto. Ivan Chebeskov, the head of the financial policy department of the Ministry, insists that the industry needs to be regulated instead. He made the assertions during a conference on cryptocurrencies held Tuesday, saying,

“We need to regulate, not ban. Regulation is sufficient to protect our citizens.”

Chebeskov further revealed that the ministry has created several proposals regarding the industry and is waiting on the government to assess them. He believes prohibiting crypto transactions, and mining would jeopardize the technological progress made by Russia in the sector.

Both institutions’ opposing views have led to the president’s intervention and call for dialogue to reach a united front. Additionally, he claims that Russia has a “competitive advantage” with its extra power and well-trained workforce, which creates a thriving crypto industry if appropriately leveraged.

On Thursday, the Russian Ministry of Finance sent a letter to the deputy chairman of the Russian government which included an official regulatory proposal for cryptocurrencies in the country. According to sources, the ministry thinks regulating cryptocurrency would lead to increased tax revenue and better tracking of criminal activities; it proposed cryptocurrency transactions be incorporated into the traditional banking infrastructure.

Russia may be reneging on its plans to ban Crypto due to the looming sanctions it is facing over a possible invasion of Ukraine. Among the package of penalties, perhaps the most threatening to Kremlin is the possibility of being excluded from the global banking system.

There are suggestions that Russia may be cut off from SWIFT, a high-security network that connects thousands of financial institutions worldwide. The ramifications of such a move to the Kremlin were expatiated on by a senior lawmaker.  Nikolai Zhuravlev, the vice-speaker of Russia’s upper house of parliament, believes Moscow and other European countries would be significantly affected by such sanctions.

“If Russia is disconnected from SWIFT, then we will not receive [foreign] currency, but buyers, European countries in the first place, will not receive our goods — oil, gas, metals and other important components.”

Russia’s general belief is that it won’t be cut off from the SWIFT network. However, it is not beyond the Kremlin to make contingency plans and alternative means to transfer funds. Moscow has continued to develop its payment system. According to the Central Bank, the SPFS has around 400 users and accounts for 20% of all domestic transfers. Its operation is limited to just weekdays.

Other options Moscow may consider include China’s Cross-border Interbank Payment System (CIPS) and cryptocurrency. Like El Salvador, which has made Bitcoin a legal tender, the Kremlin may be open to using crypto in an official capacity.

These alternatives are unappealing to Russia. However, the difficulty in cutting Moscow off SWIFT due to its trade ties with many countries would be a saving grace.

Do you see Russia eventually placing a ban on crypto? Let us know in the comments below.