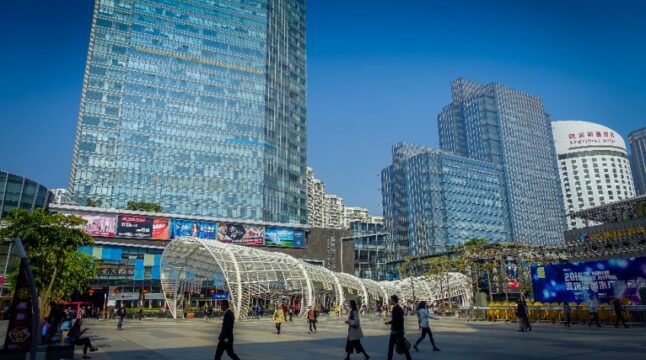 Shenzhen-based companies account for one-third of CBDC bridge pilot project transactions in China, according to a local media report.

One-third of China’s CBDC bridge pilot project transactions come from Shenzhen-based companies, according to a report by a local news outlet 21Caijing. The project, called mBridge, was jointly launched by China, the UAE, Hong Kong, and Thailand to facilitate quick settlement between the countries.

A new report by Chinese news outlet 21Caijing shows that companies in Shenzhen account for one-third of the transaction volume in the country’s central bank digital currency (CBDC) bridge pilot project. Shenzhen, one of the largest cities in China, was among the first to pilot the digital yuan in 2020 which has now expanded to multiple cities.

China’s CBDC bridge pilot initiative, mBridge, was launched in collaboration with the United Arab Emirates (UAE), Hong Kong, and Thailand, designed for creating a real-time 24-hour payment channel between Asia and the Middle East. The pilot project recorded $22 million in transactions between these four countries, $7.3 million of which came from companies in Shenzhen.

“A pilot involving four jurisdictions and real-value transactions took place from 15 August to 23 September on the mBridge Ledger, a custom-developed DLT platform. The 20 participating commercial banks used the platform to settle different kinds of payments for corporate customers, focusing on cross-border trade.”

China has been actively working on the development of the digital yuan, with more than a hundred million citizens using the digital yuan app in the country. The Chinese government has been even providing digital yuan loans to businesses, a move that could expand the authorities’ real-time oversight over local companies in the future.

More than 100 countries around the globe are working on their own CBDC projects. One of the biggest hurdles at the moment is the interoperability between CBDCs, though international financial groups such as IMF and SWIFT are working to solve this issue.

One of the latest countries to join the CBDC race is India. The Reserve Bank of India (RBI) is set to initiate the pilot launch of the digital rupee for specific use cases and is looking to implement the CBDC in a phased manner.

In September, the central bank of Hong Kong said it expects to launch a wholesale CBDC in 2 to 3 years after concluding “two rounds of market consultation, one on high-level technical design and one on key policy and design issues.” More details about other CBDC projects around the world can be found here.

Do you think China could become the world leader in terms of CBDC usage? Let us know in the comments below.