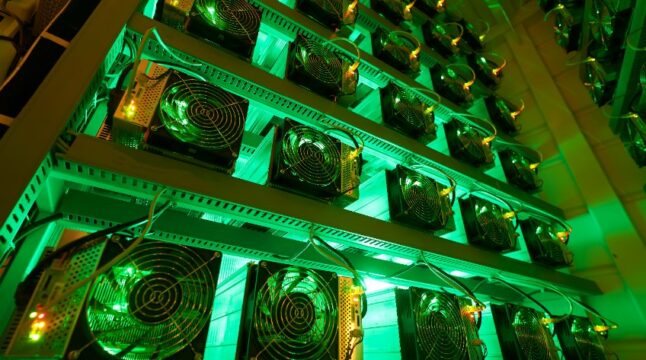 Bitcoin miners' revenue fell 16.7% between June and July, according to on-chain data.

Revenue from Bitcoin (BTC) mining has plunged 16.7% between June and July, according to on-chain data. New reports revealed that one of the primary reasons behind the drop is the skyrocketing electricity costs, which deplete more than 75% of miners’ earnings.

Bitcoin Miners’ Revenue Down Over $100M

Bitcoin on-chain data showed that BTC miners’ revenue plummeted 16.7% between June and July, marking a drop of over $100 million. More specifically, miners of the world’s largest cryptocurrency generated $555 million last month, down from $667 million in June.

Miner revenue was the lowest on July 13, when it bottomed at just 13.929. Furthermore, Bitcoin’s total hash rate dropped below the 190 million mark on July 20, its lowest point since March.

According to a new report by CryptoMonday.de, Bitcoin miners spend over 75% of their earnings on massive electricity costs. While this is bad news for miners, it is also very concerning for our environment as such costs lead to a significant carbon footprint.

The report showed that nowadays a single Bitcoin transaction consumes roughly 2165 kWh of electricity. For comparison, this is what a regular U.S. household spends in 74 days. In July, a study led by congressional democrats showed that consume nearly as much electric energy as every home in Houston, Texas.

“Factor in the roughly $0.14/kWh that an average household pays, and the magnitude of expenditure becomes evident,” according to the report from CryptoMonday.de.

Last month, data from blockchain analytics firm CryptoQuant showed that Bitcoin miners offloaded more than $300 million worth of Bitcoin on July 15. The move marked a significant daily outflow spike amid a major sell-off by BTC miners that started back in June.

A key reason behind the sell-off is that current Bitcoin prices and substantial electricity costs make mining hardly profitable. This is because energy prices have been soaring over the past few months, particularly after Russia’s invasion of Ukraine.

Recent research showed that public cryptocurrency mining companies sold 30% of their Bitcoin holdings in the first four months of the year to survive the ongoing crypto winter. Crypto prices have declined sharply in 2022 amid record-high inflation, aggressive interest rate hikes, and geopolitical tensions.

The crypto market drawdown and the collapse of the algorithmic stablecoin TerraUSD and LUNA earlier this year have resulted in numerous crypto firms going bankrupt. These include Celsius Network and Voyager Digital, both of which declared bankruptcy last month.

Do you think the worst of the crypto winter is behind us? Let us know in the comments below.